On 8th November 1957, hundreds of British military and scientific personnel gathered at Christmas Island, a remote speck of land in the Pacific Ocean. They were there for Operation Grapple X, the first successful test of a British hydrogen bomb. At 1.8 megatons, the blast was about a hundred and forty times more powerful than the atomic bomb that destroyed Hiroshima, and signified Britain's mastery of the secrets of thermonuclear power. Amongst the witnesses to the mushroom cloud rising above Christmas Island was a 35 year old technician named Frank Raynor. As he recalls, in perhaps something of an understatement, it was “quite impressive” to watch: 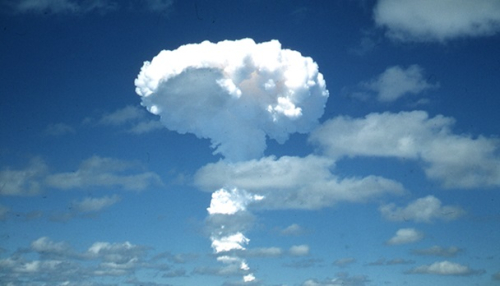 The tests were also witnessed by Laurance Reed, a naval officer on HMS Warrior. He describes a shipboard atmosphere of excitement, anxiety and awe when the first bomb was dropped.

The full interview with Frank Raynor can be found in the Oral History of British Science collection on British Library Sounds.