When George Martin died in March 2016 aged 90, the headlines predominantly focused on his work as producer of The Beatles. The infamous “fifth Beatle” moniker was taken up by both The Guardian and The Telegraph, whilst The Economist celebrated “their humble servant”.[i] Martin’s input as musical and technical enabler for the so-called Fab Four is well documented, but his role also spread into pastoral and even paternal territory – Paul McCartney spoke of a “second father” figure – so it’s no wonder the band and their producer are treated as synonymous.[ii] 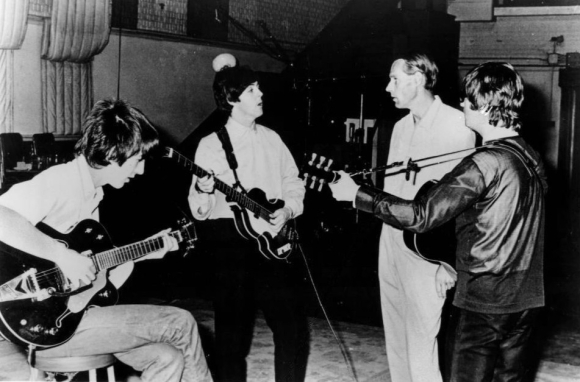 Martin’s discography beyond The Beatles also received some attention, though perhaps not as much as it deserves. Many of his obituaries celebrated the comedy and children’s records Martin produced for Parlophone in the late 1950s and early 1960s, several of which still hold up to contemporary ears, but beyond that his early Parlophone releases have not made it into mainstream cultural memory. Chris King’s review of a six-CD box set release of Martin’s work epitomises this pattern of reception:

While the concept of paying tribute to one of music's most illustrious producers is commendable, the truth is that his mainstream output during the 1960s eclipses the rest of his work, thus rendering the other CDs all but redundant. Perhaps a box set concentrating solely on Martin's 1960s pop productions might have proved the better option.[iii]

It is these earlier, ‘eclipsed’ records on Parlophone that have been the focus of my Edison Fellowship at the British Library. They are many and varied in musical style, often twee and quaint by modern standards, but they also say a lot about Martin’s formative years as a producer, and more broadly the musical landscape of postwar Britain.

Martin joined the German-British record label Parlophone in 1950 under the tutelage of Oscar Preuss, whose recording career was typical of his generation. Joining the Berlin-based International Talking Machine Company in 1904 aged 15, Preuss toured the world recording musicians from across Europe, as well as Brazil, Mexico and a number of Asian countries. Perceval Graves’ 1928 interview with him centres on his “log-book, [...] a complete chronicle of recording on Four Continents”, with Preuss recalling “long and tiring journeys, sometimes over miles of desert”, including one trip to Aleppo where wax disc shortages led to a two-week wait for the missing cases to reappear on camel-back.[iv]

Preuss’ attitude towards Arabic music is both uncomfortably colonial and endearing, with one Egyptian singer, a cotton magnate, thanking him for their sessions by gifting Preuss a rug that he hangs at home in South East London. Other projects are remarkably prescient of scenes from psychedelic recording sessions of the mid-1960s: “The amount of raw spirits, cocaine and other drugs absorbed by artistes and their entourage throughout sessions lasting from early evening till two and three o’clock in the morning [...] rather alarmed me until I got used to it!”[v] Yet Preuss’ description of musical devices, instrumentation and improvisation, alongside the pragmatic concerns of capturing the material on a limited medium (“their songs are customarily of an interminable length [...], a prompter is inevitable”), convey a sensitive listener who was, as Christopher Stone puts it, “a leisurely, rather cynically genial man, whom you recognise instantly as a master of his craft and a devil for work.”[vi]

Preuss retired in 1955, shortly before his death in 1958, and was succeeded by the 29-year-old Martin as head of Parlophone. The label was one of several EMI subsidiaries alongside HMV and Columbia. In his 1979 autobiography Martin bemoans Parlophone’s marginalised status in the organisation, held back by reluctant management staff and a limited budget. The label showcased a huge variety of music at this time including jazz, classical and various folk traditions, and when Martin began signing acts the label’s output diversified further still. Joy Nichols’ rendition of “Little Red Monkey” from 1953, sung alongside Jimmy Edwards and Dick Bentley, typifies Martin’s novelty output, a clip of which can be heard below.

More rare is the instrumental version performed by Frank Chacksfield, whose orchestras were middle-of-the-road powerhouses that churned out numerous light music releases during this period. This release features the composer himself, Jack Jordan, on the clavioline, an electronic keyboard instrument with a distinctly reedy sound.

Though Martin later claimed his ambition was to find an equivalent to Cliff Richard, an artist whose sales hugely bolstered EMI’s Columbia in the late 1950s, the route taken by the producer was somewhat circuitous. He tried his hand at “do it yourself” records in 1956, a proto-karaoke series of backing tracks performed by Ron Goodwin’s “Parlophone Pops Orchestra” and aimed at amateur singers,[vii] and when he began signing up comedians and variety acts such as Flanders and Swann it was difficult to predict which records would sell. “Mock Mozart”, for example, was a novelty release by actor Peter Ustinov, who sang the harmonies of a miniature opera parody by overdubbing his own voice and bouncing down takes between two tape machines. Martin spent hours coaxing him through the process, yet the record only sold a few hundred copies.[viii]

Martin also supervised a number of classical sessions when he joined Parlophone. Artists included pianists such as Sidney Harrison and George Chavchavadze, as well as the London Baroque Ensemble, whose rendition of the last movement of Mozart’s Serenata notturna, K. 239 conducted by Karl Haas can be heard below.

It would be tempting to paint Martin as the classically-schooled practitioner whose trained hand turned whatever pop he produced to gold. A cursory survey of his classical credentials throws up familiar biographical milestones. After serving in the Royal Navy, Martin won a scholarship to the Guildhall School of Music and Drama, following which he played oboe in various orchestras and worked at the BBC Music Library. He brought his compositional experience to numerous Beatles records, arranging string parts for tracks like “Yesterday” and “Eleanor Rigby”, to the extent that some commentators have portrayed Martin as the literate Beatle, the one who realised ideas for the band members who could not read music.

Yet this would be a disservice to Martin’s eclecticism. Sidney Harrison was actually his senior and had recommended Martin years earlier to the Guildhall following a bout of written correspondence. In one letter Harrison advised Martin, who had sent him his own Chopin-inspired compositions, to “know his marine band and start arranging for them.”[ix] The London Baroque Ensemble was never quite as grand as its title implied, and Martin delighted in recounting the unassuming nature of the affair: having met eighteenth-century music aficionado Peter Ustinov at a party, musicologist and conductor Karl Haas “decided to form the London Baroque Society and invited Peter to be the President. Karl was the conductor, I was the secretary – and that was the London Baroque society”.[x] When the narrative of lofty classical producer was bolstered by classist connotations in relation to The Beatles, Martin was most at pains to set the record straight: “I’ve been cast in the role of schoolmaster, the toff, the better-educated, and they’ve been the urchins that I’ve shaped [...] It’s a load of poppycock, really, because our backgrounds were very similar. [...] I wasn’t taught music and they weren’t, we taught ourselves.”[xi]

What, then, might a suitable lynchpin be for understanding Martin’s career? Another Parlophone artist gets us a little closer. “My Lady Greensleeves” sung by Luton Girls Choir in 1950 is part of the prolific recorded output of a choir that began at the most local level (“The girls must live within five miles of Luton’s Town Hall”) and grew to international fame with appearances in front of the Royal Family, gracing iconic venues like St Paul’s Cathedral. The choir was run for several decades by the enthusiastic Arthur E. Davies, who wanted to revive the “dying art” of choral singing, and its membership ranged from schoolgirls to the age cap of 23. “Greensleeves” is of course the quintessential English folk song, and under Davies’ direction and an orchestra led by Ivor Novello Award-winning film music composer Philip Green, the choir achieved a rousing rendition. 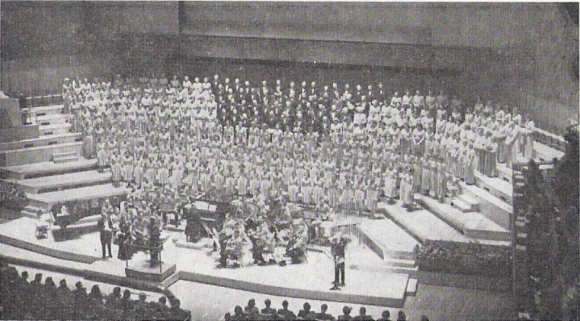 This was part of the soundworld Martin inherited when he joined Parlophone. It is surely telling that the next time he encountered the tune he was hastily writing an arrangement to close “All You Need Is Love” for the Our World television special. “Write absolutely anything you like, George,” The Beatles asked him: “The mixture I came up with was culled from the ‘Marseillaise’, a Bach two-part invention, ‘Greensleeves’, and the little lick from ‘In the Mood’.” The broadcast went out in June 1967 to an estimated half a billion people. If Mozart, Chopin and other accepted greats were central to Martin’s canon then so too were the British traditions of folk song, community choirs and parochial classical societies. He may not have had a signature sound like other leading producers of his generation, say John Culshaw or Quincy Jones, but his eclecticism was a trademark of sorts.

Here I am positing the Englishness of Martin’s records not as some nebulous nationalistic quality, but rather a specific phonographic heritage unique to postwar Britain. It is rooted in a DIY mentality of re-purposing technology and circumventing corporate regulations. It draws on the sound worlds of revue, music hall and brass bands, as well as various non-Western music traditions, though always filtered through a Eurocentric lense inherited from mentor Preuss. These elements pervade British popular music of the 1960s as much as the loudly celebrated American strands of rock ’n’ roll, R&B and Tin Pan Alley, yet they receive considerably less scholarly attention. Music historians should dig here before signing off on George Martin’s inestimable contribution to recorded music.

With thanks to Joanna Hughes and Sonita Cox at the EMI Archive Trust, Mark Lewisohn and Kenneth Womack

[xi]  Quoted in “George Martin obituary: The Beatles producer who made the Fab Four a worldwide success”, The Independent, 9 March 2016, http://www.independent.co.uk/news/obituaries/sir-george-martin-obituary-the-beatles-record-producer-who-made-the-fab-four-a-worldwide-success-a6920546.html (accessed 15 August 2017).

Posted by Jonathan Summers at 3:01 PM