Following the viral response on the internet to Jack Copeland and Jason Long's 2016 blog concerning their restoration of the world's earliest surviving computer music recording, the pair's follow up is in two parts: (1) they explain how they resurrected the authentic sound of Turing's long since dismantled Manchester computer, by reconstructing two Christmas carols that the computer played in a BBC Radio broadcast in December 1951, and (2) they examine and clarify the competing international claims to the title of World's First Computer Music.

Listeners to BBC radio heard an utterly new sound in 1951 — a computer playing music. Among its Christmas fare the BBC broadcast two melodies that, although instantly recognizable, sounded like nothing else on earth. They were Jingle Bells and Good King Wenceslas, played by the mammoth Ferranti Mark I computer that stood in Alan Turing's Computing Machine Laboratory, in Manchester.

According to Ferranti’s marketing supremo, Vivian Bowden, it was "the most expensive and most elaborate method of playing a tune that has ever been devised". Bowden may have kicked himself for predicting, at this seminal moment, that computer-generated music had no future.

Alan Turing (right) at the console of the Ferranti Mark I. Photo courtesy of the University of Manchester School of Computer Science

Seemingly nothing remained of the computer's short Christmas concert, apart from Bowden's brief description in his 1953 book Faster Than Thought. We realized, though, that we had everything needed to recreate the computer's historic performance of these carols, thanks to our recent research into other music played by the Ferranti computer.

Previously we restored a 1951 BBC recording of the Ferranti playing three pieces of music. One of the engineers present at that long-ago recording session, Frank Cooper, had squirrelled away a BBC disc, and this is believed to be the earliest surviving recording of computer-generated music. The three pieces on the disc were God Save the King, Baa Baa Black Sheep, and In the Mood.

The performances on Cooper's disc contained between them a total of 152 individual computer-generated notes. By manually chopping up the audio, we created a palette of notes of various pitches and durations. These could then be rearranged to form new melodies. It was musical Lego: endless new structures could be produced from these basic building blocks. The process of recreating the carols was not always straightforward, however. Sometimes the notes we needed were missing from the palette, since they did not appear in the three reference pieces. Missing notes had to be manufactured, first by calculating the closest frequency that the Ferranti computer could generate — it wasn't always able to hit a note exactly — and then shifting the frequency of one of the specimens in the palette to achieve a match (while trying, moreover, to keep the specimen's spectral signature the same, so as to maintain a natural sound). Another problem was duration: sometimes a note needed to be shorter or longer than the specimen in the palette, so we either pared the specimen down, or pieced together copies of it by hand.

We had to re-score each carol to fit the computer's needs, especially in terms of key and complexity; and our scores mirrored the three reference pieces in length and tempo. Then we selected notes from the palette and pieced them together to fit the scores. Some handcrafting was required to create a realistic performance. For instance, a fake-sounding "machine gun effect" was liable to set in if the score required the same note to be repeated several times, so we achieved a natural sound by piecing together different specimens of the same note, taken from different places in the restored recording. Every time we stitched a new note into the melody, we cross-faded manually: fading out one element while fading in the next gave the optimum sound quality when piecing the notes together.

Slowly, the computer's gutsy renditions of the carols reappeared. Play them and enjoy! But beware of occasional dud notes. Because the computer chugged along at a sedate 4 kilohertz or so, hitting the right frequency was not always possible. It's a charming feature of this early music — even if it does in places make your ears cringe.

At about this time, other primeval mammoth computers were also starting to find their voices. Bowden mentions that the Whirlwind computer at Massachusetts Institute of Technology played Bach fugues at Christmas time — 'much more highbrow' than the Ferranti's carols, he said. 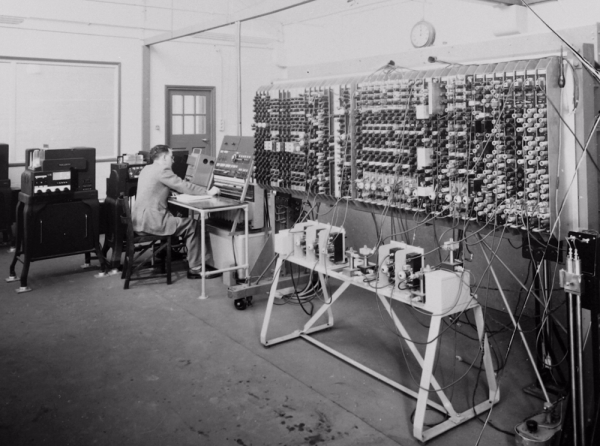 The pilot model of Turing's ACE in London in 1952. © Crown Copyright and reproduced with permission of the National Physical Laboratory

In London, too, the pilot model of Turing's Automatic Computing Engine (ACE) played Bach, possibly earlier than Whirlwind, using a loudspeaker set into its control panel. The pilot model ACE first came to life in May 1950, and by about February 1952 it was also "composing" — in a sense — its own music, using some special equipment designed by engineer David Clayden. The rising arpeggios of ACE's atonal music "gradually became more complex and faster, like a developing David Clayden. Photo courtesy of The Turing Archive for the History of Computing

fugue", until they "dissolved into coloured noise as the complexity went beyond human understanding", explained Donald Davies.[1] (Davies, originally Turing's assistant, was a driving force in the ACE project after Turing went to Manchester.)

For a long time, the history of early computer music was muddled. Reference works such as The Oxford Handbook of Computer Music stated that “the first computer to play music” was the Australian CSIRAC (pronounced "sigh-rack"). However, recent research has shown that this was most definitely not so.[2] We discovered that a predecessor of the Ferranti computer also played musical notes in Turing's Manchester Computing Machine Laboratory. This was the university-built prototype on which the Ferranti Mark I was based (and it was itself an enhanced version of Manchester's primordial "Baby" computer). Turing called it the "pilot machine", not to be confused with the pilot model of his ACE in London. The Manchester pilot machine was operational in April 1949, well ahead of the Sydney CSIRAC, which was partially operational in late 1950 — several months after Manchester's note-playing pilot machine had been switched off for the last time, in fact. 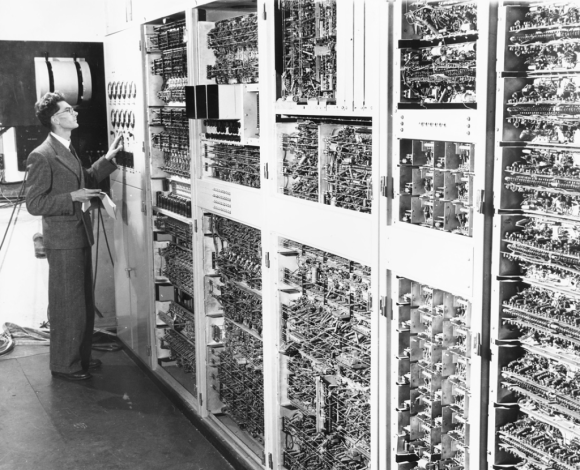 CSIRAC and its creator Trevor Pearcey in Sydney in about 1952. A CSIRO image

Unlike CSIRAC, though, the Manchester pilot machine seems never to have played a conventional melody. Turing used the synthetic musical notes as aural indicators of what was going on with the machine, like the beeps and bongs of today's mobile devices — whereas CSIRAC played honest-to-goodness tunes. It turns out, though, that CSIRAC can't even claim the distinction of being the first computer to play conventional music.

Our research has shown that an American computer called BINAC was making music before CSIRAC ran so much as a test program. BINAC, built by the Eckert-Mauchly Computer Corporation in Philadelphia, was the forerunner of the famous Eckert-Mauchly UNIVAC — the Ferranti Mark I and the UNIVAC were the first electronic computers to hit the market, both in 1951. 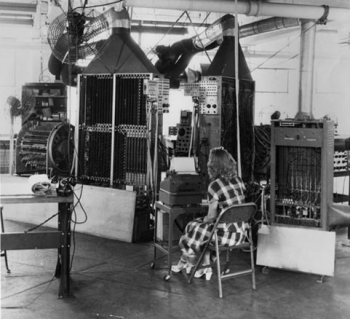 BINAC played music in Philadelphia in the summer of 1949. Photo courtesy of the Computer History Museum

When BINAC was completed, in August 1949, Pres Eckert and John Mauchly threw a party for the programmers and engineers. This featured a musical offering from BINAC itself. One eyewitness — a partying engineer named Herman Lukoff — described the event: “Someone had discovered that, by programming the right number of cycles, a predictable tone could be produced. So BINAC was outfitted with a loudspeaker … and tunes were played for the first time by program control.”

The programmer responsible for creating BINAC's music-playing program — the first in the world, so far as we know — was Betty Snyder, later Betty Holberton. Recalling her intensive work programming BINAC, Holberton said: “I was on the machine 16 hours [with] 8 hours off and I slept in the ladies' room.” 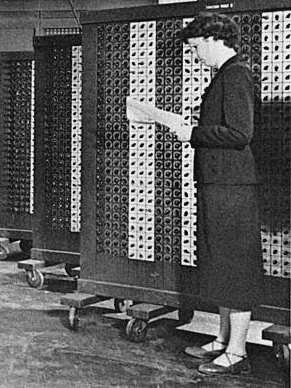 And the title of the first music played by a computer? "Everybody was going to come to the party at the end of creating the BINAC", Holberton remembered; "Well, I thought I'd do something special for them ... an interpretive routine that would play music. All I could get out of that machine was an octave, so I played For He’s a Jolly Good Fellow."[3]

Our timeline for the origins of computer music places BINAC in the limelight, in mid 1949. The Sydney CSIRAC played its first tune a year or two later, and the Bach-playing ACE in London may have preceded it. In Manchester, the Ferranti computer performed its first melody in 1951, when Christopher Strachey wrote a program that blared out God Save the King (see our blog 'Restoring the first recording of computer music'). But as to the starting point of it all, the very first experimental computer-generated musical note was probably heard in Turing's Manchester laboratory.

[2] See Copeland, B. J., and Long, J. "Turing and the History of Computer Music", in Floyd, J., Bokulich, A. eds Philosophical Explorations of the Legacy of Alan Turing, Boston Studies in the Philosophy and History of Science, 2017.

Jack Copeland is Distinguished Professor in Arts at the University of Canterbury, New Zealand. His recent book The Turing Guide is a comprehensive and easy-to-understand guide to Turing and his work, and it contains further information about the Manchester computer and its music (Oxford University Press, 2017, pbk).

Jason Long is a New Zealand composer and performer, focusing on musical robotics and electro-acoustic music. He has carried out musical research at the University of Canterbury, the Victoria University of Wellington, Tokyo University of the Arts, and the Utrecht Higher School of the Arts.

Archives, Contemporary Britain, Save our Sounds, Sound and vision, Technology