When a collector’s interest covers a very specific area of recording they often amass something valuable and comprehensive over a lifetime of acquisition.  One such collector is Christopher Steward whose collection of recordings on shellac discs of flute and piccolo recordings seems second to none.  I am delighted to have negotiated for this important and large collection to come to the British Library, even more so as Mr Steward generously decided to donate it.  It is a veritable history of the flute on record.

Christopher Steward studied at Trinity College completing his studies with William Bennett.  A former member of the City of Birmingham Symphony Orchestra and BBC Northern Orchestra, he also taught at the Birmingham Conservatoire.

The treasures of the collection include many very early discs by artists born in the middle of the nineteenth century – Léon Fontbonne (1859-1940), Albert Fransella (1865-1935), Adolphe Hennebains (1862-1914) and Edward de Jong born in 1837 when Brahms was only four years old.  Not only are there representations of the great flautists of the past, but Mr Steward also collected recordings by uncredited flute and piccolo players, many from the first two decades of the twentieth century.

A small representation of discs from Mr Steward’s collection have been posted online here on Robert Bigio’s Flute Pages.  I have chosen to present some below that do not appear on these pages.

Because it is Christmas and we are gearing up for the holiday mood we start with Léon Jacquemont, a flautist with the Garde Républicaine.  This is a recording of him playing a delightful showpiece for piccolo, La Tourterelle (The Turtle Dove) Op. 119 by Eugène Damaré recorded around 1909 for the rarely seen Aérophone label.

In the Menuet from Bizet’s L’Arlesienne suite No. 2, the harp accompaniment had to be played on the piano in order for it to register through the acoustic horn, but the Lamoureux Orchestra join in on this disc from 1st March 1910 to support their principal flautist Pierre Deschamps (1874-1922). 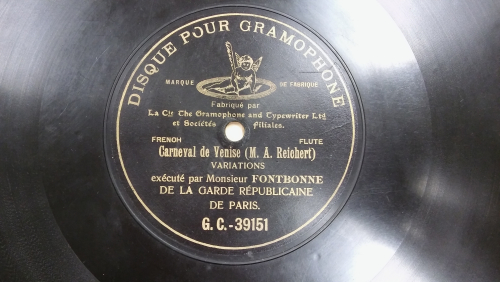 Léon Fontbonne (1859-1940) became first flautist and piccolo player with the Garde Républicaine, a position he held for twenty five years.  Here he is with a great virtuoso showpiece recorded 116 years ago in 1901, Carnaval de Venise Op. 2 by Matheus André Reichert, a work published in 1872. 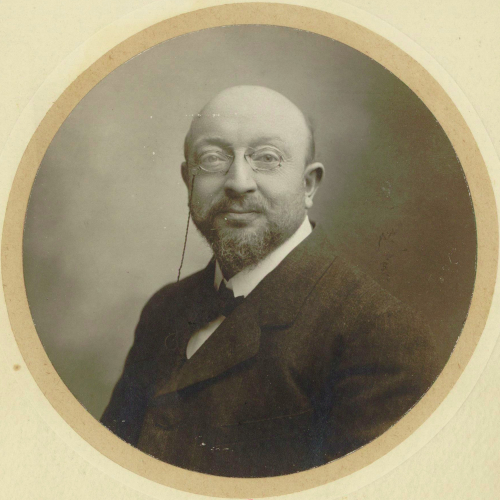 Another fine French flautist, Adolphe Hennebains (1862-1914) can be heard in early recordings of chamber music on BL Sounds.  Here he plays a Chopin Nocturne arranged for flute by Paul Taffanel (1844-1908) – not the famous one in E flat Op. 9 No. 2 as one may suppose, but the beautiful F sharp major Nocturne Op. 15 No. 2.  The recording was made in the year of Taffanel’s death, 1908, and it is remarkable that even in this primitive acoustic recording with orchestral accompaniment Hennebains’ intake of breath can be heard during the opening phrases.

A surprising disc from the collection appears on the Odeon label.  The flutist is George Ackroyd (1880-1960) who was principal flute with the Covent Garden Orchestra, but it was the violinist’s name that caught my eye – Albert Sammons (1886-1957), one of England’s greatest violinists, who went on to make the first recording of the Elgar Violin Concerto in October 1916 for Columbia.  Here they play an arrangement of Mendelssohn’s immortal Spring Song recorded around 1915 with W. Barker on harp. Edith Penville was an impressive player who died as recently as 1981, at the age of nearly one hundred.  This Homochord disc is a conflation of two works - part of the Variations sur un air Allemand Op. 22 by Theobald Boehm (1794-1881) preceded by part of a Faust Fantasie by Edward de Jong (1837-1920) who became the first flute with the original Hallé Orchestra in 1858.  Penville could have studied with him as she was born in the North of England and he worked in the Manchester and Derbyshire area.  De Jong himself recorded in 1907 and these recordings and more details about him can be found on this excellent blog. Penville’s impressive recording was made on 11th December 1923.

We end with an electrical recording.  Jacques van Lier (1881-1934) (not to be confused with the Dutch cellist of the same name) was principal flautist with the Vienna Philharmonic Orchestra from 1907 to his death in 1934.  He made two sides for HMV on 18th June 1931 in Czechoslovakia with accompanist Otto Schulhof who had accompanied many great soloists including Heifetz as a child prodigy, Pablo Casals, Fritz Kreisler, Bronislaw Huberman and Jan Kubelik.  Van Lier plays the flute solo from Gluck’s opera Alceste.

Posted by Jonathan Summers at 10:44 AM