At the Wembley Empire Exhibition of 1924, one exhibit that caught the public eye was a dolls’ house, specially created for Queen Mary, which contained a fully-working miniature gramophone complete with six tiny records made by His Master's Voice.

Around 35,000 miniature discs were produced for sale as souvenirs, at sixpence each. Despite this far-from-limited edition, copies are hard to come by now, perhaps because they could so easily be lost or mislaid. The souvenir discs featured a 22-second rendering of ‘God Save the King’ by the popular Australian singer Peter Dawson. At just 34 mm (1 and 5/16th of an inch) in diameter, this is the smallest 78 rpm disc ever made.

A copy is currently on display in the British Library's free Entrance Hall exhibition LISTEN: 140 Years of Recorded Sound.

This is not the world's smallest playable record however. A contender for this coveted title arrived at the Library just a few weeks ago, courtesy of Michael Ridge. 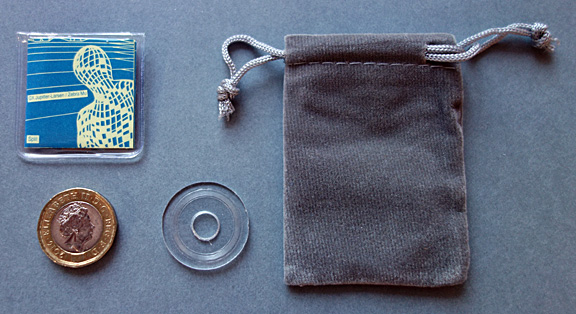 This 1" diameter 33 rpm lathe-cut disc by GX Jupitter-Larsen and Zebra Mu (each contributes an 8-second piece) is cautiously described by issuing label Quagga Curious Sounds as 'likely to be one of the smallest lathe cut records ever released'! Sadly, the limited edition of 110 copies is already sold out.