On Holocaust Memorial Day, Charlie Morgan (Archive and Administrative Assistant for National Life Stories) writes about a recent addition to the Jewish Survivors of the Holocaust collection.

In November of last year I was contacted by Annabel Simms and Kate Turner, the daughters of Elizabeth Simms, one of the interviewees in the Holocaust Survivors' Centre Interviews project. Elizabeth was a keen poet and after her death in 2015 Annabel and Kate had rediscovered what she always described as her best piece of work.

The poem, titled ‘I Got Away’, was written in 1946 and describes events that took place in November and December 1944 when Elizabeth escaped not just once but twice from Nazi death marches. Annabel and Kate asked if we would like to add it to our collections alongside the 2005 interview with Elizabeth. We said yes. 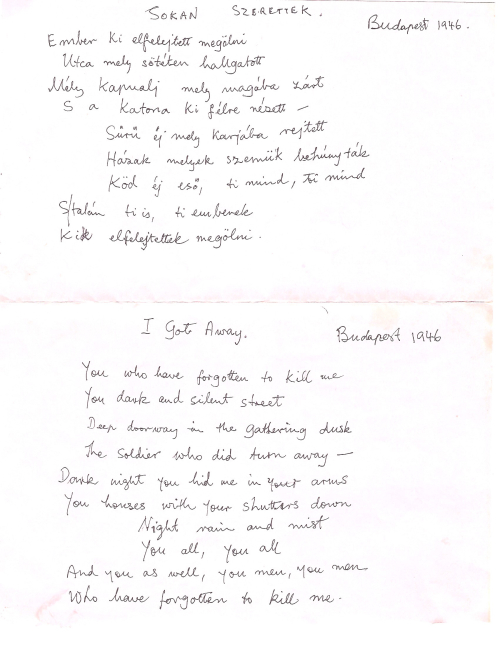 In March of 1944 the German army marched into Budapest where 21 year old Elizabeth was living with her family. The family were taken to a concentration camp and spent six months imprisoned, before being released in September. Their release was to be a temporary reprieve and in October the fascist Arrow Cross Party took control of the government.

Prior to 1944 Hungary had passed anti-Semitic laws, deported thousands of Jews, and been an active ally of the Third Reich, but it was after the German invasion, and especially under the six month rule of the Arrow Cross, that a concerted attempt was made to implement a ‘Final Solution’. By the end of 1944 the Holocaust, previously centred on the Hungarian countryside, was fully extended to the Jews of Budapest

‘I Got Away’ relates Elizabeth’s two escapes from Nazi death marches and is a composite of events from both. Elizabeth was captured in October 1944 and following two weeks of forced labour was put on a march towards a train station.

After witnessing a bystander shot for saying “poor things” she decided to escape. Aware that any quick movement would alert the Arrow Cross guards, she stepped out the line, walked at a normal pace in the other direction, tore off her yellow star, and hid in a cellar (“Dark night you hid me in your arms”). She boarded a tram back to Budapest where she was spotted by a Hungarian officer who for unknown reasons said nothing (“The soldier who did turn away”).

After her safe house was raided in December 1944 Elizabeth was again marched out of the city but again escaped, this time going to an address she had been given by her father. But the people at the address would only let her stay until 10.30 at night when they turned her out on the streets. This was a Jewish Quarter, it was dark, past curfew and the Arrow Cross were out looking for Jews (“Night rain and mist”).

Elizabeth knocked at ten doors that night (“You houses with your shutters down”), before someone let her in. The man behind the tenth door was a Protestant of German descent and a member of the dissolved Social Democratic Party. Over the course of the Holocaust he saved over 300 Jews.

When I spoke to Annabel she mentioned that he was motivated by the experience of having lived as a religious minority in Catholic Hungary and she compared him to Le Chambon-sur-Lignon, the French village where residents saved thousands of Jews. She said he explained simply that “it was my duty as a human being”.

Elizabeth spent the rest of the war in hiding until Hungary was liberated by the Soviet forces in March 1945, although even then she had to protect herself from Soviet soldiers who would regularly rape local women. Her father had died in December 1944 but Elizabeth’s mother was able to send a telegram to her son (Elizabeth’s brother) in Leeds to say the two of them had survived. He managed to get them travel papers and in 1947 they arrived in the UK. 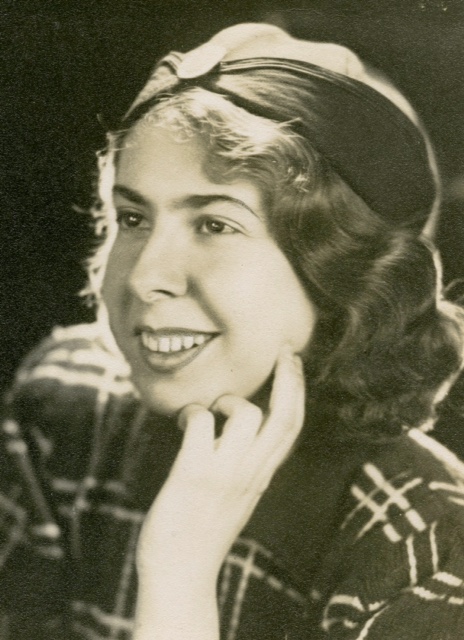 The interviews were conducted between the late 1980s and the early 2000s and for many survivors it was the first time they had spoken openly about their experiences. For Elizabeth, the interview took place nearly six decades after she had written the poem ‘I Got Away’ and there is marked difference between the two. Her poem is immediate and visceral; the interview more reflective. Taken together the two documents provide a powerful window into her life and her struggle for survival.

‘I Got Away’ ends defiantly, a pointed finger at “you all, you all… who have forgotten to kill me”. Unlike so many others, Elizabeth lived and the responsibility and privilege of preserving her life story and making it publicly accessible is now with us at the British Library. We hope that many people will listen to her story and those of countless others, at the same time reflecting upon those who never go the chance to tell their own.

On Holocaust Memorial Day we remember the atrocities of the past, but remembering is an active and not a passive process. Oral histories like those of Elizabeth are just one part of this process but they enable us to directly grapple with history. Her story is a reminder that behind every number and every headline there were human beings who lived, died, resisted and persevered.

The Holocaust Survivors' Centre Interviews was a National Life Stories collaborative project with the Jewish Care Holocaust Survivors' Centre, a Jewish social centre in north London for survivors who were in Europe during the Second World War or who came to the UK as refugees. The project ran between 1993 and 1998 and gathered a total of 154 audio life story testimonies. You can listen to the full interview with Elizabeth Simms at British Library Sounds.

With thanks to Annabel Simms and Kate Turner for their help with this blog.