Mary Lee Berners-Lee: the joy of programming and equal pay

This blog is by Tom Lean, National Life Stories Project Interviewer. Tom interviewed Mary Lee Berners-Lee and her husband Conway for An Oral History of British Science (reference C1379/23) in 2010-2011.

Mary Lee Berners-Lee, originally Mary Lee Woods, is probably best known as the mother of Sir Tim Berners-Lee, inventor of the World Wide Web, but she had a considerable career in science and technology in her own right. After studying mathematics at the University of Birmingham, she spent the latter part of the Second World War working at the Telecommunications Research Establish (TRE), the secret centre of Britain’s radar development effort. With the war over she returned to her studies, before leaving Britain for the Mount Stromlo observatory in Australia in 1947, where she worked classifying the spectra of stars. In 1951 she returned to Britain and chanced across an advert for a job at Ferranti in Manchester that would change her life: “I was reading Nature and saw an advertisement one day for – saying, ‘Mathematicians wanted to work on a digital computer.’” 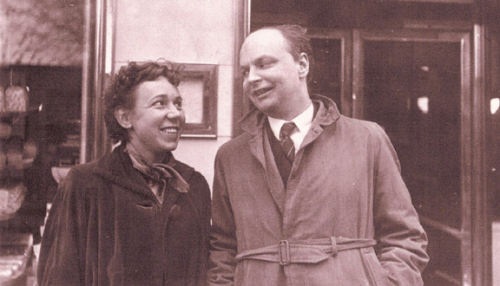 Mary Lee and Conway Berners-Lee in 1954

Mary Lee spent three days in a reference library learning what a computer was, “the most profitable three days I think I’ve ever had because when I went for the interview for the job I could ask intelligent questions and nobody else they’d interviewed had, so it put up my salary quite a bit!” Subsequently she joined the team working on the Ferranti Mark 1, the world’s first general purpose electronic computer to be commercially available – the first machine built to be sold to customers not just an experimental electronic brain developed by scientists. At Ferranti she discovered not only her future husband, Conway Berners-Lee, but also the joy of programming, as she recounts in this extract from her interview for An Oral History of British Science.

Mary Lee Berners-Lee on the joy of programming

Mary Lee left Ferranti to raise a family, but later worked in various computing related jobs. She was not only a pioneer of computer programming, but also for women in science and technology. Mary  fought against Ferranti’s concerns that it would be improper of women programmers to work on the computer overnight with male engineers, and demanded equal pay for women programmers.

You can read more about Mary Lee and listen to more extracts at Voices of Science; parts of her life story interview are available in the Library Reading Rooms.