Recording of the week: Anglo-Romani and dialect

It was great to see Peaky Blinders back for a fourth series as, among its many delights, it offers a rare glimpse in the mainstream media of Anglo-Romani. Given the presence of traveller communities across the UK it’s perhaps not surprising that Romani has influenced local dialect in many parts of the country. Speakers either side of the English-Scottish border, for instance, will be familiar with terms like gadgie [from gaujo = ‘(non-gypsy) man’], mort [= ‘girl, woman’], mooey [from mui = ‘mouth, face’], radgie [from radge = ‘mad, angry’] and scran [= ‘food’]. A small set of Romani words are used more widely, including cushty [from kushti = ‘good’], mullered [= ‘dead, killed’] and mush [= ‘man (esp. as form of address’] and a recent collaboration between the British Library and Guardian newspaper to document regional words confirmed the relationship between Anglo-Romani & dialect as contributors supplied numerous expressions including chore [= ‘to steal’ (Poole)], dinilo [= ‘fool, Idiot’ (Portsmouth)], jukkel [= ‘dog’ (Carlisle)], ladging [= ‘embarrassing’ (York)] and tuvli [= ‘cigarette’ (Newark)]. 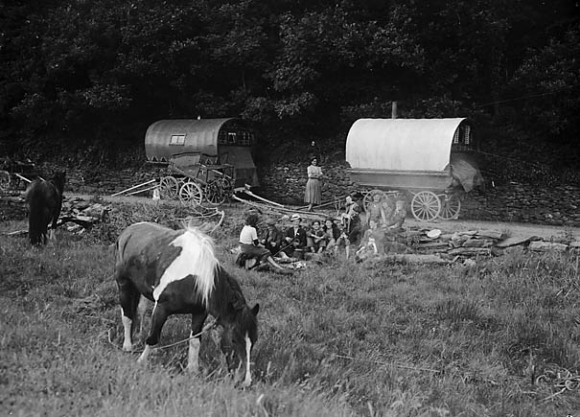 Probably the most unfortunate contribution of Anglo-Romani to English is the word chav, which in recent years has been adopted by young speakers all over the country to refer negatively to a stereotypical young ne’er-do-well characterised by cheap designer clothes, anti-social behaviour and low social status. The word derives from the much more endearing Anglo-Romani word chavvi [= ‘boy, son’] and illustrates how certain social groups have unfortunately always attracted suspicion and condemnation. A WordBank contributor from the Medway, Kent who can pukker [= ‘to speak’] Romani explains, for instance, how he will often jel down the tober to see my little chavvis in my vardo [‘go down the road to see my children in my caravan’], while another contributor submitted an expression assumed to be local to Newark, seemingly unaware of its Romani origins. The book Romani Rokkeripen To-Divvus (Thomas Acton and Donald Kenrick, 1984) records mandi [= ‘I’], buer [= ‘woman’] and rokker [= ‘to talk, speak’].

Over 400 recordings capturing English dialect and slang worldwide can be found in the Evolving English Wordbank collection on British Library Sounds.