Recording of the week: echolocating birds

Echolocation is a handy tool used by several groups of animals to understand the world around them. The major players are bats and cetaceans, who use the echoes of specialist calls to locate prey and navigate in conditions where visibility is poor, however a few other animals also possess their own biosonar systems.

Oilbirds (Steatornis caripensis) are one of only a handful of birds with the ability to echolocate. These nocturnal birds roost in caves across the tropical forests of northwestern South America and spend a considerable amount of their time in the dark. In conditions where eyesight is irrelevant, individuals use sequences of clicks to build up a 3D image of their surroundings. The rapid fire and variable nature of these sequences is captured in the following recording made in the Colombian Andes by wildlife sound recordist Ian Todd. Calls from nearby birds can also be heard, especially in the first half of the recording. 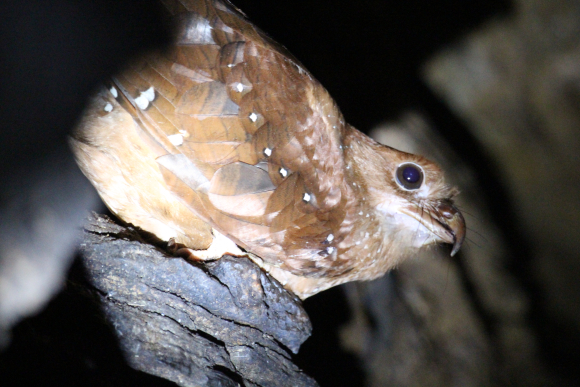 As Ian explained in his accompanying notes, obtaining this recording was by no means a walk in the park.

"To gain access to the mouth of the cave we had to wade across the fast-flowing upland Rio Alicante, and then clamber up a series of huge boulders. The colony of Oilbirds was localised just within the cave entrance."

Hats off to you, sir.