August 2017 saw the 70th anniversary of the Partition of India. The ground-breaking BBC Radio 4 series Partition Voices documented this traumatic time through first-hand testimony, which were then crafted into three 40 minute programmes broadcast on 31 July, 7 and 14 August 2017. All three are available on the BBC iPlayer.

The series has had a legacy of its own as Kavita Puri (presenter) and Ant Adeane (one of the producers) then completed the additional work on the permissions forms, transcripts and content summaries necessary to archive 32 of the audio interviews into the oral history collections here at the British Library. The full interviews are available for researchers in the Library Reading Rooms, and will be launched for online access in 2019.

The Partition Voices collection (reference C1790) sits alongside many existing oral history collections which contain powerful testimonies of migration and the impact of the colonial British past. In what might be one of the last opportunities to gather these testimonies, Partition Voices recounted the first-hand testimonies from British Asians and Colonial British who lived through the partition of India 70 years ago.

The programmes documented the years leading up to the division and the bloody aftermath which saw up to 12 million people displaced and up to one million people killed. The final programme told of the legacy in Britain today, not only for those who lived through it, but for the second and third generations.

In my view the programmes managed the challenging task of reflecting the complexity of experiences: geographically within British India; reflections from women; as well as gathering testimony from many of the communities who lived through it, not only Muslims, Sikhs and Hindus, but also Anglo-Indians, Parsees and Colonial British. I was impressed by the use of personal testimony to weave a compelling narrative which did not shy away from difficult subjects. Here is a glimpse of stories from just four of the narrators.

The series had a wide impact as it brought to the fore this seldom-told but shared history between South Asia and Britain, which provoked reflection on the role and legacy of the British Empire. In reaction to the series many British people spoke of how they did not know about this part of their history, and British Asians – many thousands of whom are descended from families affected by partition – said how the programmes made them think in-depth about the events and legacy of 1947 in their own families and communities.

I’m delighted to announce that Partition Voices has now been recognised by Royal Historical Society, as winner of the both the radio/podcast category and overall Public History Prize 2018. The oral history team have had previous success in the Public History Prize, winning the web category for Voices of Science in 2015. 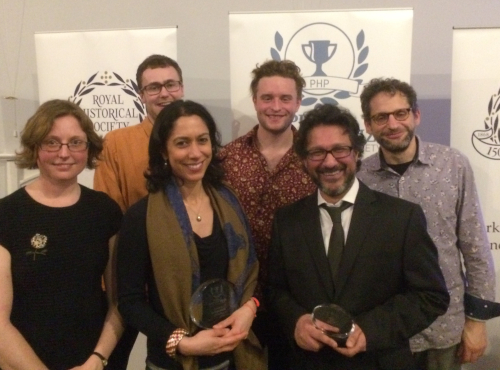 It was a privilege to attend the award ceremony last Friday to see this series recognised, and hear about so many other admirable and powerful public history projects commended by the RHS.