Farewell to Sir Dan - founder of the Bournemouth Municipal Orchestra 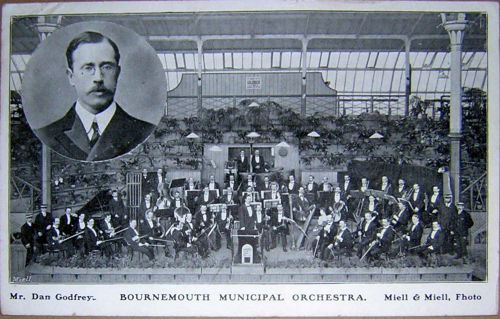 I was recently surprised to discover an unusual recording here at the British Library Sound Archive.  It is an exciting find as it documents the Farewell Concert relayed from the Pavilion, Bournemouth on 30th September 1934 by one of the great figures of British music making before the War, Dan Godfrey.

English conductor Dan Godfrey was born in London in 1868.  His father, also Dan, (1831-1903) was bandmaster of the Grenadier Guards.  Dan, the son, formed the Bournemouth Municipal Orchestra in 1893 when he was twenty-five.  Their first concert was on the 22nd May 1893 at the Winter Gardens, a huge glass structure with a seating capacity of 4,000 built in 1875.  By 1895 the orchestra became the first salaried municipal orchestra in the country and, along with the Hallé Orchestra, one of the few permanent symphony orchestras in England.  By the turn of the century Godfrey was gaining a reputation as an exponent of British music along with Henry Wood, also giving British premieres of major works by Tchaikovsky, Saint-Saens and Richard Strauss.  By 1903 Godfrey conducted his 500th concert and in 1910 Fritz Kreisler gave the provincial premier of Elgar’s Violin Concerto at Bournemouth after the world premiere in London. 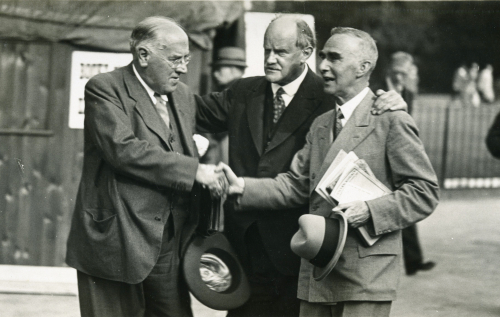 Knighted in 1922 ‘for valuable services to British music’, by 1934 Sir Dan was sixty-five and had to retire, hence the farewell concert where he passed the baton to Richard Austin (1903-1989).  Most of the concert was captured on these early discs from the broadcast including the speech at the end from Sir Hugh Allen (1869-1946) a musician whose life was spent between Oxford and the Royal College of Music in London.  An emotional Sir Dan responds to Sir Hugh, particularly when he refers to the musicians of the orchestra.  After forty one years conducting over two thousand concerts with this orchestra he lived on for only another five years, but his legacy remains as his orchestra became the Bournemouth Symphony Orchestra that we know today.

The musical excerpt I have chosen is of a work that Sir Dan conducted at his first concert in 1893.  It is taken from the incidental music English composer Edward German (1862-1936) wrote for a London performance of Shakespeare’s Henry VIII in 1892.  In his speech, Sir Dan relates that he received a telegram from the composer that afternoon.

Posted by Jonathan Summers at 3:41 PM