50 years since the Ronan Point disaster

50 years ago today at approximately 5.45am Ivy Hodge entered her kitchen on the 18th floor of the Ronan Point building in Canning Town and lit a match. The match triggered a gas explosion which blew out her panel built walls and led to the partial collapse of the 21-storey tower. Four people were killed and seventeen injured. The casualties were lower than might have been expected but the impact of the Ronan Point disaster on architecture, urban planning and building regulation would be enormous. 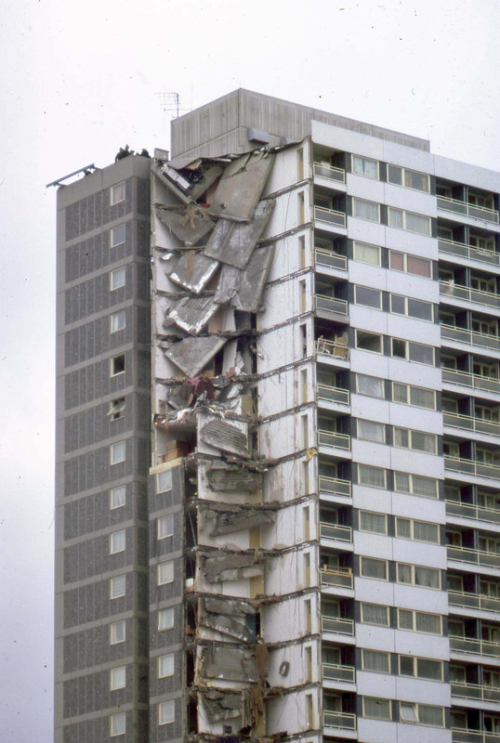 An inquiry found severe weaknesses with the Large Panel System method used to build Ronan Point and suggested many other tower blocks were at risk. In response legislation was passed to change building codes, to regulate the use of pre-fabricated parts and to safeguard buildings in the case of explosion. Notably the Ronan Point disaster shook public faith in high rise building itself, construction of new buildings halted and many were eventually demolished. Ronan Point was torn down in 1986.

The National Life Stories oral history collection Architects’ Lives contains over 140 interviews with British architects and their associates and unsurprisingly Ronan Point features heavily. The interviews are able to help us understand how the disaster affected those working in the industry.

Kate Macintosh knows the architecture of London well having designed buildings in Southwark and Lambeth. She is able to give us the context of how Ronan Point was built through precasting, the lack of supervision of this method and some shocking discoveries from her friend Sam Webb’s report into the disaster:

Ronan Point was built by the private firm Taylor Woodrow and it's easy to look back and say the issue was with private construction. Yet our interview with Norman Engleback challenges this and he talks of how the Greater London Council used the same construction method and that reconstruction only took place afterwards.. According to Norman it was only the “luck of the draw” that GLC buildings didn’t also collapse “like packs of cards”:

For Maurice Ash, who would in 1969 become Chairman of the Town and Country Planning Association, the disaster justified his long campaign against high rise construction and his view that the people who lived in the towers “hated” it:

Regulation change is a legalistic process but it has deeply human consequences. The interviews in Architects’ Lives are a fantastic resource for understanding these consequences but they are at the same time limited. Notably in this case they do not include the voices of those who lived in Ronan Point or other tower blocks. With this mind it is useful to contextualise the collection among other local oral histories and oral histories of housing; for example the interviews in the East London People’s Archive as well as the work of the Woodberry Down Memories Group and Tony Parker’s ground breaking book The People of Providence. Taken as a whole these oral histories shed some light on how disasters like Ronan Point as well as broader changes in housing were experienced by the people involved and affected.

Architects’ Lives is an ongoing National Life Stories project which began in 1995. Many interviews from Architects’ Lives, included those mentioned in this blog, can be accessed via the British Library Sounds website in the Architecture collection. To explore the collection in detail, please search the Sound and Moving Image catalogue. The catalogue reference used for all the recordings in the project is C467. A list of interviewees is also available.