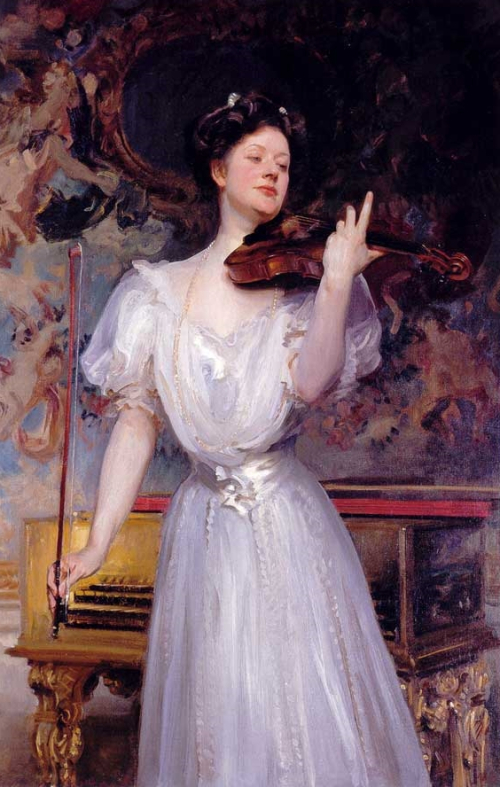 Leonora von Stosch was born in Washington D.C. on the 7th November 1872. Her father had been born in Germany but immigrated to the United States as a young man where he married an English woman.  Leonora first studied music in Washington with Joseph Kaspar, and at the age of sixteen, she and her mother went to Brussels where Leonora studied under Cornelis at the Conservatory of Music.  Upon graduation two years later, she played for the great Joseph Joachim in Berlin and at nineteen continued her studies in Paris with Martin Pierre Marsick (1847-1924) whose pupils included Carl Flesch, Jacques Thibaud and George Enescu.  Leonora also studied under Arno Hilf in Leipzig.  At this time she performed the Rondo Capriccioso by Saint-Saëns with the Boston Symphony Orchestra and Arthur Nikisch.  She was already twenty-seven years of age when she first played in London in 1899. The Morning Post wrote of her performance, ‘Saint-Saëns’ Andante and Rondo Capriccioso for violin was played with much lightness and vivacity by Madame Leonora von Stosch, a remarkably clever performer, who ought to make her mark.’

Leonora had one daughter by her first marriage to American Louis Meredith Howland but the marriage failed and in 1902 she married wealthy banker Edgar Speyer.  She was thirty, he was forty.  After her second marriage, Leonora did not perform much in public and took up poetry, winning a Pulitzer Prize in 1924 for her book of poetry Fiddler’s Farewell.  However, the list of famous musicians who visited the Speyer’s new home in Grosvenor Street, where Edgar had converted two houses into one, was impressive.  The music room was graced by a portrait of Lady Speyer by the greatest portrait painter of the day, the American John Singer Sargent, and the visitors included Percy Grainger, Richard Strauss and Edward Elgar.  In 1906 Grieg visited England to receive an honorary degree from Oxford University and stayed for a few days with the Speyers at Grosvenor Street where the elderly Norwegian composer was greatly impressed by their home and hospitality.

In January 1910 when Elgar dined at Grosvenor Street, Leonora and Elgar read through the slow movement of the new violin concerto he was writing.  She was the first to play it (albeit in private) and during May she and the composer rehearsed the first movement.  Robert Newman had founded the Queen’s Hall Orchestra and the Proms but by 1902 was getting into financial difficulties resulting in bankruptcy.  Edgar Speyer offered to underwrite the losses and by 1914 had invested £26,000 in the Queen’s Hall Orchestra Company Ltd.  Speyer also financed the premiere of Elgar’s Second Symphony and enticed Debussy to visit London in 1908 and 1909.  He invited Richard Strauss to London to conduct the first performance of his great tone poem Ein Heldenleben in 1902 and three years later Strauss dedicated his opera Salome to Speyer.

It was in 1909 that Leonora made some discs for HMV.  As far as I know, these have not turned up on LP or CD anthologies of violin playing, particularly The Recorded Violin (Pearl 1990) or The Great Violinists 1900-1913 (Testament). It is probable that her husband paid for the recordings as Leonora was by this time not performing much in public and the discs would not have sold well. Indeed, they are rare today and of the three published sides, the British Library holds only one.  Leonora had two sessions for HMV, at their pre-Hayes location, not far from the British Library in City Road probably playing one of the two famous violins owned at the time by the Speyers - either the 1699 Stradivarius, known as the ‘St. Vallier Sikorsky’ which the Speyers owned from 1903-1911, or the 1742 Guarneri, the ‘Lord Wilton’, which they owned from 1902-1921.  At the first session on 26th March 1909, of the five sides recorded, only one was issued – the Hungarian Dance No. 1 in G minor by Brahms arranged by Joseph Joachim. 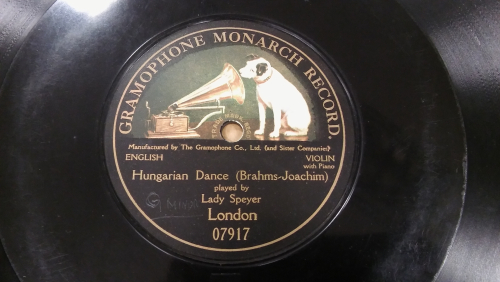 The second session was on 18th May 1909 when she recorded four sides (three being repetitions from the previous session) and two of these were published.  The Brahms title was issued from this second session replacing the previously released one from the first.  The Library holds the recording of this work from the first session.  The other published side has been loaned to the Library for digitisation by Jolyon Hudson.  The repertoire here is curious:  the label has Capriccio all‘antica and Capriccio by Bohm. 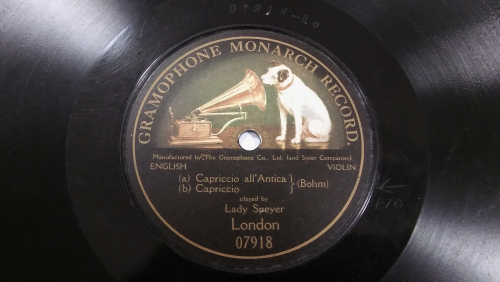 Carl Bohm (1844-1920) was a prolific German composer of unabashed restraint whose vast output runs to nearly 400 works with opus number and many more besides, some of which contain a large body of works – his Op. 326 contains 143 songs while Op. 327 comprises 78 pieces.

The first work on the recording is actually not by Bohm but the Capriccio all‘antica Op. 25 No. 2 by Italian composer and mountain climber Leone Sinigaglia (1868-1944).  The second piece is indeed by Bohm but has been hard to track down.  The only Capriccio by Bohm I could find in the Music Library is from Op. 314, subtitled Papillon and it is not this work.  It sounds very much like the popular violin showpiece L’Abeille (The Bee) by Francois Schubert (1808-1878, no relation to the famous Franz Schubert) - No. 9 of his 12 Morceaux detachés for violin and piano, Op. 13 - but the key is wrong (G minor instead of E minor) and although the beginning is very similar, it is evidently not the same work.  It turns out to be the fourth movement from Bohm’s Suite in G minor which is titled Capriccio, but is also subtitled The Bee, The Gnat or La Mouche and therefore looks like pure plagiarism of the Schubert piece.

In 1914 Leonora gave three evenings of violin sonatas (presumably at her home) by Fauré and Richard Strauss.  In each case she was accompanied by the composer.  The Speyers were then caught up in the catastrophe of the First World War and moved to the United States with their four daughters.  Edgar, born in New York to German parents, had become a British citizen in 1892.  He was responsible for the expansion of the London Underground system in the early years of the twentieth century and donated large sums of money to many charitable causes.  Although he was created a baronet and member of the Privy Council, anti-German sentiment and political intrigue in Britain during the First World War meant that in 1921 an investigation decided he was to be struck off the Privy Council list and have his British Nationality revoked.

The Grosvenor Street house was sold in 1923 and the family lived in Washington Square in New York.  Edgar died in Germany in 1932, where he was on a visit, at the age of 69.  Leonora died in 1956 at the age of 83 but their daughters returned to England to live.

A forgotten name in the history of violin playing, Lady Speyer was not a celebrated public virtuoso but preferred the role of hostess in London's musical circles and wife to her illustrious husband.  Nonetheless, it is fascinating to be able to hear someone whose life touched so many important musicians at the turn of the twentieth century, notwithstanding that of her unfortunate, more famous husband.

Posted by Jonathan Summers at 12:56 PM