Sounds from beyond the Iron Curtain: Soviet classical recordings at the British Library Sound Archive 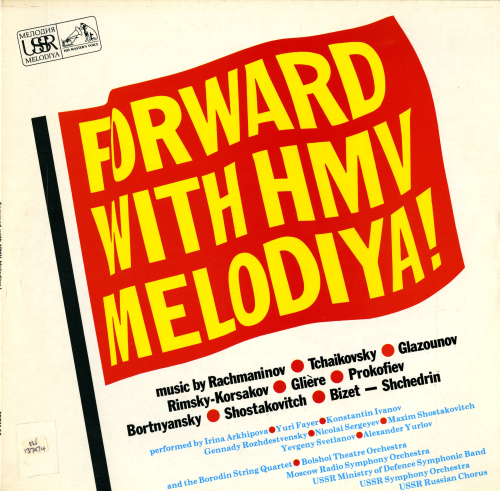 What is the first thing that comes to your mind when you hear of ‘Soviet music’? Is it the Red Army Choir with their military band songs, or the enigmatic symphonies of Dmitri Shostakovich? The British Library holds a large variety of Soviet and Russian music recordings, from different Western record labels as well as the official Soviet (now Russian) state record company, Melodiya.

My PhD research, supported by the Edison Fellowship at the British Library Sound Archive, explores Soviet and Russian classical music recordings in the West during the Cold War. I am investigating Soviet music recordings available in the UK from the 1950s to the 1980s.

From the 1950s, technological advancements in music recording led to a widespread practice of listening to and collecting records. Three key technical innovations triggered accelerated growth in the record industry after the Second World War: the development of magnetic tape recording, the invention of the vinyl long-playing disc and the introduction of stereo sound reproduction.

The LP remained the main format for classical music listening in the home between the 1950s and the early 1980s, when it was gradually overtaken in terms of sales volume by cassettes and then CDs. The establishment of the LP format also led to an important repertoire phenomenon: all major classical music repertoire in the back catalogue of the main record companies was very quickly re-recorded during the 1950s for the LP format. This meant that the record consumer now had access to a huge variety of interpretations of the same music. Hence, by the late 1950s the Western classical music market was saturated with recorded interpretations of works from the traditional Western canon and listeners were hungry for new performers and repertoire.

Finally, the introduction of stereo sound in 1958 dramatically improved the quality of the listening at home experience, which for classical music was a much more significant factor compared to other music genres. The market for high-quality LPs of classical music took off, with music lovers investing in high-quality listening equipment and paying a premium for stereo vinyl releases.

By the mid-1950s, the largest Western markets for records were the USA, UK, France and West Germany. In Europe, the two record companies that were in the best position after the war were EMI and Decca in Britain. At this time, after the death of Stalin in 1953, the Soviet Union changed its attitude towards the West. An active programme of cultural exchange was established with a crucial role given to Soviet musicians of showcasing the excellence of Soviet and Russian performing arts to the West during their tours. Musicians’ tours could only cover several major cities, while recordings sold in shops and played on the radio reached far and wide across geographical territories. The 1950s saw a medley of Western labels issuing miscellaneously licensed Soviet recordings. A selection has been digitised for British Library Sounds, on a variety of Western labels, all taking advantage of the thaw in Western-Soviet cultural relations and the interest in Soviet classical performers.

A recording of the pianists Emil Gilels and Yakov Zak playing the Mozart Concerto for Two Pianos with the Moscow Radio Orchestra conducted by Kirill Kondrashin was issued by Period Records, a respectable US classical label, before going bust in 1957.  Here is an extract.

Another US label, Concert Hall Records, released some recordings of the violinist David Oistrakh and conductor Alexander Gauk with the State Radio Orchestra of the USSR.  Here is an extract from the slow movement of Beethoven's Violin Concerto.

Monarch Records also released Oistrakh and the State Radio Orchestra of the USSR with Kondrashin in 1954.  Here is the opening of the last movement of Brahms' Violin Concerto.

In the mid-1960s the Soviet Union decided to concentrate on one exclusive partner in each of the capitalist countries.  These were handled by Mezhdunarodnaya Kniga (MK), the book foreign trade organization of the USSR.  The chosen Western partners were Angel (a Capitol Records label, being a subsidiary of EMI Group) in the USA in 1966, HMV (an EMI Group label) in the UK and Australia in 1967, Ariola-Eurodisc in West Germany in 1965, Chant du Monde in France and Victor in Japan. The Soviets did not want to have one partner for the whole of the capitalist world as this would have been too restrictive.

My research on the Edison Fellowship focuses on the UK partnership agreement between EMI and the USSR from the late 1960s to early 1980s. This exclusive licensing agreement allowed EMI to release over 200 LPs in the UK.  These recordings comprised a vast and varied repertoire of Soviet and Russian music performed by the great Soviet artists of the day as well as some less well known musicians. Melodiya made the recordings in its studios in the USSR and then provided EMI with lists of the recorded master tapes, from which EMI chose the ones it wanted to release in the UK. The recordings from the Melodiya master tapes were then pressed on high-quality vinyl at EMI’s main production facility in Hayes, Middlesex. They were released on the Melodiya/HMV label especially created for this Russian series of music.

Below are photos from the dinner EMI held at ‘The Compleat Angler’ hotel at Marlow on the River Thames in August 1975 for Igor Preferansky of MK who was responsible for licensing Soviet gramophone recordings abroad.  The top picture is of Tony Locantro (EMI business manager responsible for Soviet licensing agreement within EMI) and Lev Ershov (representative of the Soviet Trade Delegation).  The picture below is (from left to right) of David Finch and Ken Butcher (both from the International Sales Division of EMI Records UK) and Igor Preferansky. 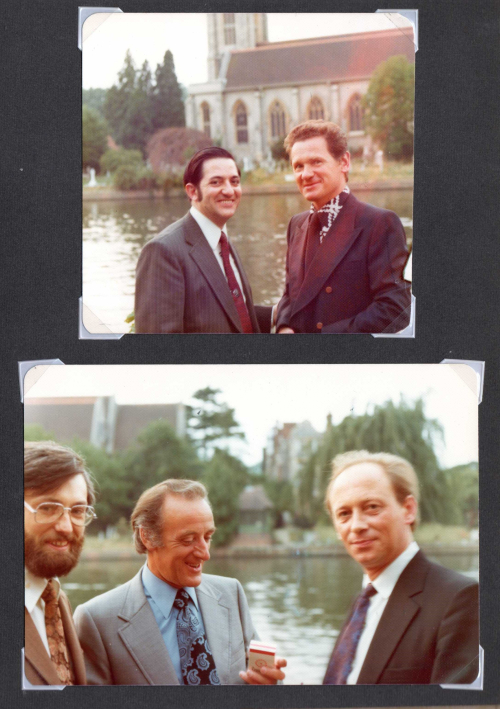 EMI chose the front cover image and back sleeve notes for the UK-distributed discs, which were different from those chosen by Melodiya, to accompany the same recordings for distribution in the USSR. For instance, many of the Shostakovich recordings were released by Melodiya for its domestic Soviet market with a simple photograph of the composer on the cover. EMI took a much more imaginative approach to its classical covers and interpreted the music of Shostakovich, especially his symphonies, with a variety of illustrations, providing visual cues about the music to the listener.One particular symphony is worthy of further discussion, his Symphony No. 13 or Babi Yar, which is based on the poems by the Soviet poet Yevgeny Yevtushenko about anti-Semitism and the massacre of Jews during the Second World War in Russia. Shostakovich composed the work in the spring and summer of 1962, just six months after the poems were published. These works were read as condemnation of anti-Semitism that existed in the USSR at the time, thus receiving a divided reaction within the critical circles. Consequently, finding a soloist and conductor for the premier of the symphony was not a straightforward matter: both Shostakovich’s first choices, the bass singer Boris Gmirya and the famous conductor Yevgeny Mravinsky, who premiered many of the composer’s symphonies until then, refused to take on the roles possibly due to pressure from the authorities. The Ministry of Culture was displeased with the strong Jewish content of the texts but the first performance went ahead on 18 December 1962 by the Moscow Philharmonic Orchestra with conductor Kirill Kondrashin. After the premiere, the composer and poet were persuaded to change the text to reflect that not only Jews, but Russians and Ukranians died at Babi Yar. The new version was conducted by Kondrashin on 10th and 11th February 1963. Further performances of the work took place in cities across the USSR but it was actively discouraged from public performance until the early 1970s.

Melodiya recorded Symphony No. 13 in 1971 and issued it with a neutral photography of Shostakovich on the cover. There was no reference to any Jewish content in the music whatsoever. EMI, however, releasing the licensed recording in the UK in 1973, chose to make a very vivid and explicit reference to the Jewish content of the Symphony: the cover shows a forlorn field where someone has dug a huge hole with scattered stones and a large Star of David in the background. This produces a much stronger visual impression than the straightforward portrait of the composer, as in the Melodiya case.  Such a difference in approach to cover design is not surprising, if we remember that Melodiya was a state-supported company, while EMI was a private profit-oriented business with a strong marketing acumen. 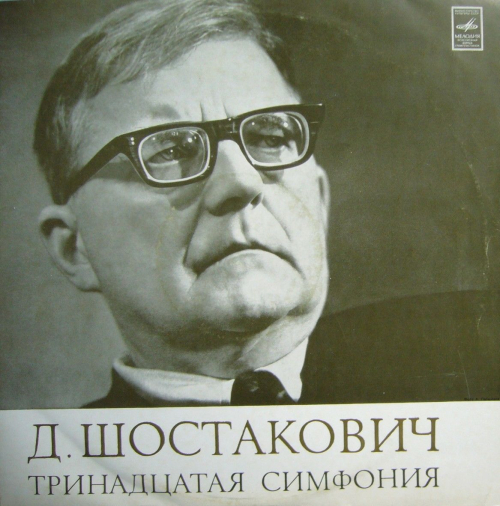 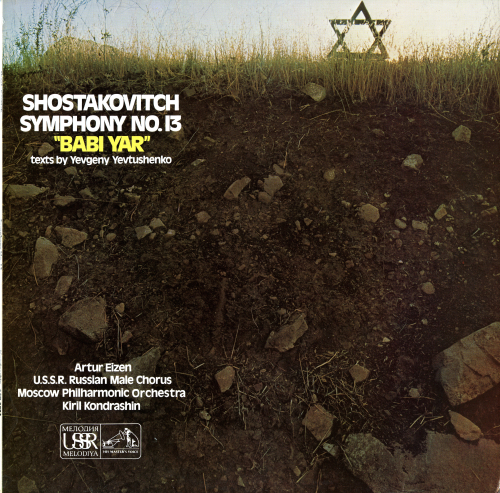 The Edison Fellowship has been instrumental in giving me access to materials and people who have helped conduct my research. In addition to studying a wide variety of books and periodicals, I have looked at the LPs in the Melodiya/HMV series that were released by EMI in the UK over the 15-year period of the agreement.  I have also studied the images and sleeve notes on those records in order to investigate the perception and presentation of Soviet music in the West. This crucial information helps us understand what kind of vision of Soviet and Russian music EMI, as the key distributor, was creating in the minds of British listeners during the Cold War. I was also able to listen to and compare the HMV/Melodiya recordings with Western recordings of the same repertoire, all held at the Sound Archive. The advice and explanations of the Classical Music Curator, Jonathan Summers, were instrumental in shaping my understanding of the broader classical music industry developments in the West at the time, of which Soviet and Russian recordings were a part. Jonathan also introduced me to important past employees of EMI, who provided information on the relationship with the USSR from the British point of view.

In parallel, I worked on materials of the Soviet Ministry of Culture held in Moscow, Russia, at the Russian State Archive of Literature and Art (RGALI) and Russian State Archive (GARF). Bringing the British and Russian sides of the story together allowed me to construct a multifaceted view of events and helped understand the motivation and decision-making process on both sides of the agreement.

The licensing agreement with the USSR was crucial in making EMI a key decision-maker on which Soviet and Russian classical music recordings to bring to the British listener, how to present them through the choice of sleeve image and cover notes, and where to sell them across the country. It presented new repertoire and performers to the British public and, to a large extent, influenced the perception of Russian and Soviet music in this country for at least a generation of listeners.

Posted by Jonathan Summers at 1:30 PM