The value of mixed media collections

The sound archive is home to over 250,000 wildlife and environmental sound recordings. Over 100,000 of these document the vocalisations of birds, while the sounds of other animal groups, such as mammals and fish, along with a growing collection of soundscapes, make up the rest. The collection covers both terrestrial and aquatic life and represents biodiversity from all over the world. It’s an internationally important resource that is constantly evolving as new recordings are archived for posterity. In a way it can be seen as a living memory bank of the sounds of our planet. The collection doesn’t end there though. Alongside these recordings can sometimes be found other treasures that complement their sonic siblings.

Recording equipment can form an important addition to a sound collection, especially when linked to significant technological breakthroughs in sound recording history. The John Hooper collection  (WA 2009/018), for example, includes a number of early bat detectors and associated equipment, including the first commercially available portable detector, the Holgate Mk 4, which was used to create the first comprehensive collection of British bat recordings. 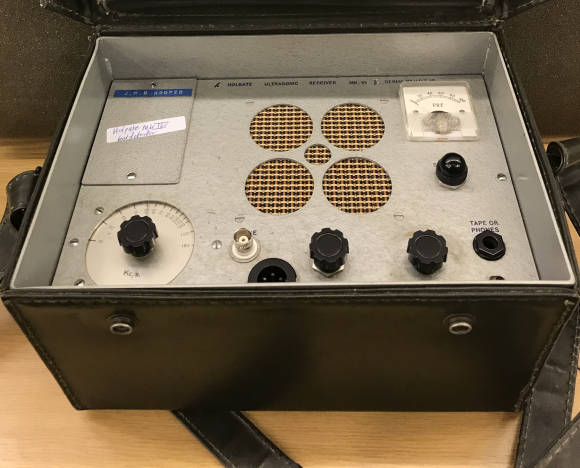 Though his name is not as widely known as it should be, Hooper was a key figure in the early days of using sound to study bat biology and ecology in the UK. Through the painstaking analysis of his recordings, conducted using a homemade oscilloscope, Hooper revealed differences in ultrasonic calls that were species specific. These variations in frequency and structure meant that bats could finally be identified by sound alone, which is pretty handy when you're trying to monitor animals that prefer to fly around in the dark.

Hooper documented his analysis by taking photographs of the sound traces produced on his oscilloscope. These images were then annotated and kept in photo albums usually associated with holiday snaps or family memories. With a focus on London bats, his work also helped rebuild post-war distribution records across the capital, rediscovering at least 4 species which were previously thought to have died out. Hooper’s efforts are all the more incredible when you consider that he was only an “amateur”.  His work as an industrial chemist for British Petroleum paid the bills, yet it was an unwavering fascination with bats that became his life's passion. 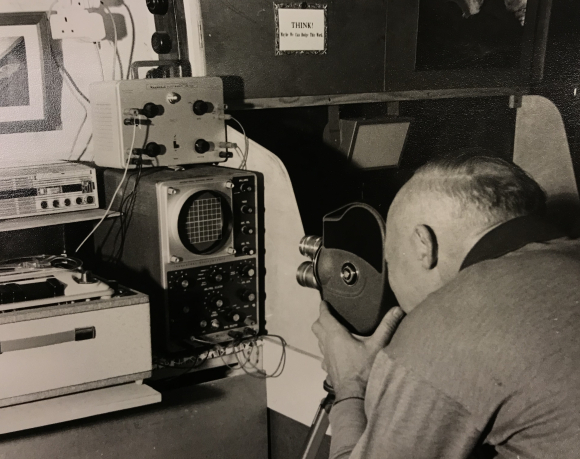 John Hooper’s collection of recordings, bat detecting equipment, photographs and documentation was donated to the library in 2009. As well as its own intrinsic value as an historical and scientific resource, the collection also serves as a testament to the rich British tradition of the amateur naturalist and their priceless contributions to our understanding of the natural world.

Another notable collection is that of EDH "Johnnie" Johnson (WA 2006/03), an ornithologist and sound recordist who spent over 30 years making recordings across Europe, north Africa and the Indian subcontinent. During his lifetime he formed part of several international expeditions to remote regions of the world, helping document the flora and fauna of these largely unexplored areas. Alongside Johnson's recordings can be found daily logs, slides, observational diagrams and hand drawn maps. The following illustration is just one example of Johnson's meticulous recording keeping. 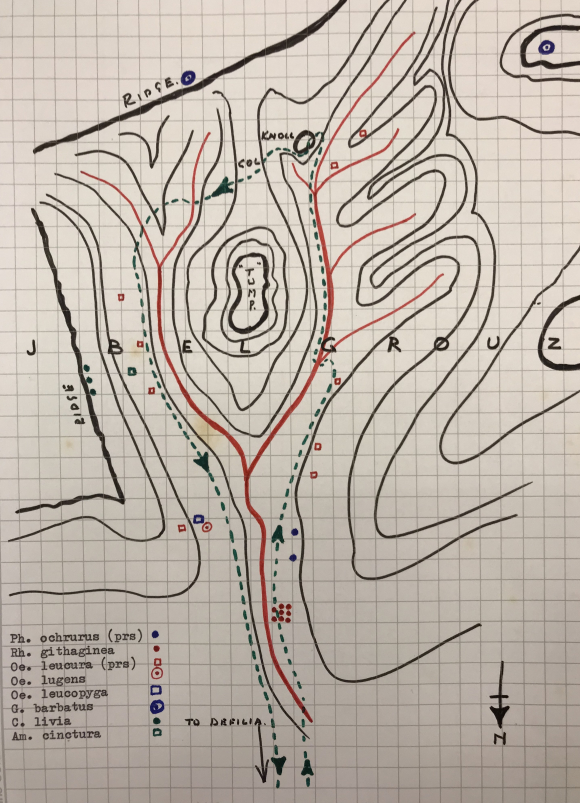 Johnson's field notes, amassed over the course of his many expeditions,  are both scientifically valuable and pleasingly anecdotal, as can be seen in this excerpt from a log describing a ringing expedition to Algeria in February 1968.

'Great Grey Shrikes (L. excubitor) were found to be common and noisy wherever there were palms. Numerous territorial disputes were constantly in progress and we often saw three birds together in such squabbles. We began to notice numbers of partly-eaten dates impaled on the spines of the lower parts of the palm fronds. At first we thought that they were the result of chance spiking when dates had fallen from above, but this was soon ruled out by the fact that the spikes were, in any case, mainly horizontal, or nearly so, and the dates were spiked very thoroughly, after the manner of a cocktail sausage. At one time we saw a single shrike carrying a date. The positions of the 'larders' coincided with the favourite perching sites of the birds, in the lower parts of the crown of palm trees.'

Items such as those accompanying Johnson's recordings can help contexualise a collection, providing clues which allow us to retrace the footsteps, and thereby the experiences, of recordists who are no longer here to tell their stories.

Wildlife sound recordists are almost always absent from their recordings. No words of encouragement or praise for their recording subjects are required in order to achieve the best results. Silence and stealth is the name of the game here.  The flip side of this is that, unless the recordings contain spoken announcements, we know very little about the recordists themselves, other than their names. That's where photographs come in. A number of photographs of EDH Johnson were found in his collection, including the fabulous example below. Being able to put a face to a name isn't a necessity, but it certainly helps bring a collection to life. 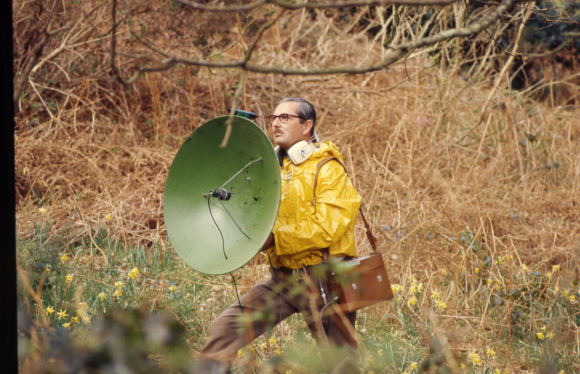 EDH Johnson recording in the field

There can be no doubt that sound collections are just as valuable as any other collection type. Though so much can be learnt from the audio alone, other ephemera such as equipment, field notes, photographs and letters bring with them stories that can help curators, and subsequently researchers, gain greater insight into not just the history and methodology associated with field recording, but also the people who made these recordings in the first place.

Follow @CherylTipp  for all the latest news on wildlife and environmental sounds at the British Library.