This blog is by Rib Davis, the 2018-2019 National Life Stories Goodison Fellow.

I am very excited to be embarking on my work as the National Life Stories Goodison Fellow 2018-2019. The project brings together my two loves, oral history and theatre, but in a way that is new for me. I am going to be exploring memory – and in particular the traumatic memories of Holocaust survivors – and how those memories are accessed differently at different points in life. So I will be particularly focusing on those Holocaust survivors in the oral history collection who have been interviewed on more than one occasion.

How do we form our memories of experiences – experiences which may be utterly chaotic – into something which we can present to ourselves and others as a coherent narrative, something that makes sense, something that might even have a meaning? How do we give it shape? How do we even choose the words? And as we create that narrative, each time we create it and re-create it, what is the process of choosing what to include, what to leave out, what to emphasise, what is an aside? How much are were affected by our own previous tellings? And how are our versions of events informed by what we have since learned from others, and also by what has happened to us personally since the time of those events? 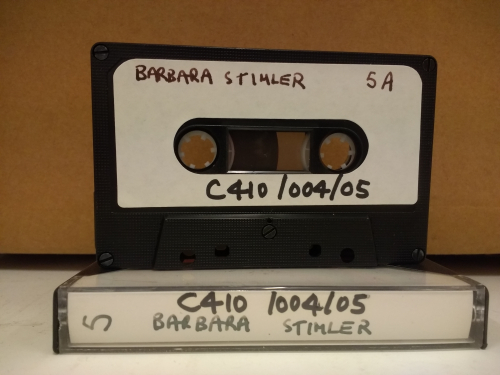 The original cassette tape from the 1988 interview with Barbara Stimler

Let us take one example. Barbara Stimler, born in Poland in 1927, endured appalling events, particularly in the Lodz/Litzmannstadt ghetto and then in Auschwitz. Barbara was interviewed a number of times; two of the interviews, from 1988 (for the Living Memory of the Jewish Community project) and 1998 (for the Holocaust Survivors Centre Interviews) are archived in the British Library and accessible in the Jewish Survivors of the Holocaust collections on British Library Sounds. Here are two version of what was perhaps the most traumatic moment of Barbara’s life: when she saw her mother for the last time. I find both versions quite difficult to listen to.

Where does all this leave us as we try to put together History? Of course we all access our memories differently every time we recall an event. This does not mean that we have to decide which version is true and which is false. There may be many different versions of an event – from different people or even from one individual – all of which may be true (and this applies to written accounts as well as oral ones). The subtle differences between one version and another, and the reasons for those differences, are fascinating and perhaps informative. (However, present day politics also reminds us that there are also some statements that are simply false – not all statements are equal).

These are the issues – of memory, of trauma and of history - with which I will be dealing, not in the form of a paper or a lecture but as theatre. The challenge is not only to come to grips with the material and its context, in a respectful yet questioning way, but then to create a script which explores it in a form that is truly theatrical. It’s a challenge I’m looking forward to.

The Living Memory of the Jewish Community was a National Life Stories project which ran between 1987 and 2000 and recorded 186 life stories with Jewish survivors of the Holocaust and their children. The Holocaust Survivors' Centre Interviews was a National Life Stories collaborative project with the Jewish Care Holocaust Survivors' Centre which ran between 1993 and 1998 and gathered 154 audio life story testimonies. You can listen to full interviews from both collections on British Library Sounds.

Posted by Charlie Morgan at 2:24 PM