Recording of the week: a Mute Swan's heart

There are hundreds of thousands of recordings of birds in the sound archive, but not all are of the typical songs and calls we would expect. I have come across recordings of wingbeats (swans, pigeons, ravens and hummingbirds all make fantastic wing sounds), drumming/pecking (woodpeckers and nuthatches), and bill clattering (the somewhat bizarre display of albatrosses). However, there are a few special recordings of something truly intimate, a heartbeat!

The Mute Swan’s heartbeat in this recording was captured by the late Richard Ridgway on Kilcolman Wildfowl Refuge in County Cork, Ireland. Richard owned and ran the refuge with his wife Margaret. This recording clearly captures Richard’s passion and care for the birds at Kilcolman as well as his interest in sound recording. 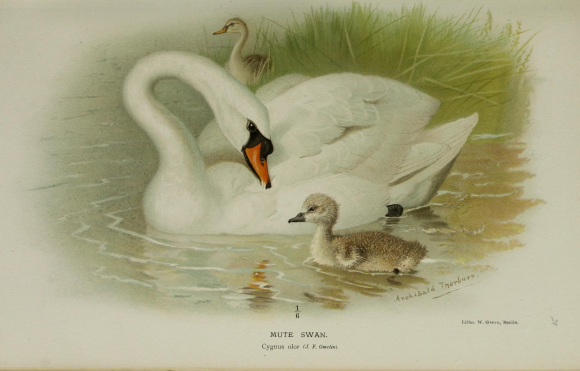 Mute swans are normally very defensive and can be incredibly aggressive when threatened. So it is no mean feat that Ridgway managed to tame this bird enough to be able to place a microphone on its chest and stroke its head. He even notes that the swan's heart rate increases when it is stroked. The swan also calls in this recording, and almost seems to respond to the recordist’s voice, which sounds unusual when recorded straight from the birds chest. It’s hard not to smile when imagining a man cuddling a swan while listening to its heart!

Recording of the week, Save our Sounds, Sound and vision, Wildlife sounds