Recording of the week: "There was always the smell" - inter-generational memories of the steel industry

The last time I wrote a recording of the week post it was about the artist Michael Rothenstein’s memories of growing up in the Cotswolds (C466/02). For him, these were all mediated through sights and sounds. This week it’s another childhood memory but we’re heading north from Gloucestershire to Yorkshire, leaving rural life for industrial work, and swapping sounds for smells.

Frank Homer was interviewed by Alan Dein in 1992 as part of the Lives in Steel project. Frank grew up in Sheffield and spent his career in pre-privatisation British Steel. Like many, he followed his father into the industry, albeit against the desires of his parents. This recording specifically deals with how Frank remembers his father, how it seemed like he was always at work and how “you never got the chance to chat too much”. He says he has one memory but “it’s not visual”, it’s the smell of his father’s overalls in the house – “there was always the smell of the steel industry”. Decades on he describes how he can still smell that same smell.

Later on in the interview Frank tells us about another inter-generational relationship when he describes working in the same department as his son Michael. Frank says he now knows how his father felt, but at the same time he fears for the future and questions whether his children will be the last generation to work in the industry. Of course we now know he was right to be concerned; Sheffield currently produces more steel than any time in the past but the work is highly automated and only employs a fraction of what it once did.

Frank himself died in 2016 and we are left in the dark about whether Michael continued to work with steel. Likewise, we don’t have his memories of working with his father. What is it that sticks with him, what does he remember? Perhaps another smell? Well, that’s for a different interview. 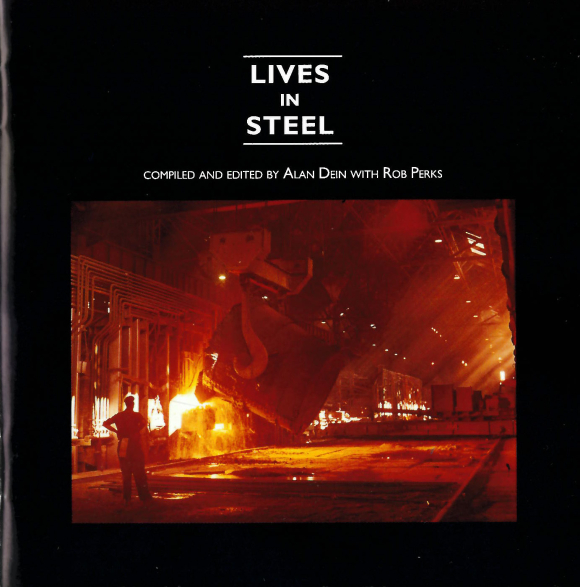 Lives in Steel was a National Life Stories project that ran in the early 1990s and was the first national oral history of the British steel industry in the twentieth century. 88 life story interviews were recorded with interviewees from all levels of the industry including blastfurnacemen, rolling mill managers, fitters, crane drivers, stock takers, rollermen, melting shop managers, descaling inspectors and concast managers. You can access the full life story interview with Frank Homer online at British Library Sounds.