The voice of Jack Johnson - heavyweight boxing champion of the world 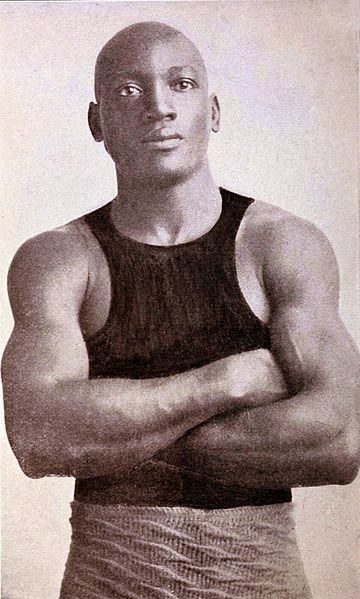 The legendary Jack Johnson (1878-1946) is remembered as the first African-American world heavyweight boxing champion, a title he held from 1908 to 1915.  At a time when race relations were extremely volatile in the United States, Johnson caused a sensation not only by beating all white challengers in the ring, but by consorting with white women and marrying three of them.

Johnson was arrested in 1912 for violating the Mann Act, a 1910 Federal law criminalizing the transport of any girl or woman across the state line for ‘immoral purposes’.  He was convicted a year later by an all-white jury, sentenced to a year in prison, but fled the country for seven years before returning to serve his time in 1920. For some years, Mike Tyson and John McCain campaigned to get him pardoned and recognised as one of the United States greatest sports legends, but it was not until last week that President Donald Trump gave Johnson a posthumous pardon.

For those of us who have a fascination with the earliest recordings, Johnson’s heyday fortunately coincided with the invention and development of film and sound recording.  Because he was a superstar and his fights were so popular they were filmed as early as 1908 (albeit silent) to be shown at a later date to fee paying audiences in theatres.  Indeed, the fight that took place on Boxing Day 1908 in Sydney Australia where he gained the title is extant.  His status meant that record companies requested his services for discs of him speaking on training, his views on physical culture, and descriptions of his most famous fights.  The discs are rare today.  Indeed, only two of three parts of the recording he made for Columbia in the United States in 1910, My own story of the big fight, have turned up.

When Johnson visited England in October 1911 for a fight at Earl’s Court he also toured the music halls where crowds flocked to see him.  A film, preserved by the BFI, was taken of him visiting the Manchester docks and leaving the Regent Theatre in Salford. 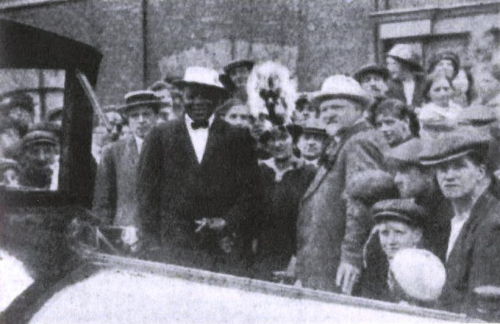 Johnson defeated Frank Moran on 27th June 1914 at the Velodrome d'Hiver in Paris then traveled to England to record for Edison Bell’s popular Winner label on the 30th June.  The two sides, titled Physical Culture, were recorded at their studio in Glengall Road, Peckham.  In his exemplary book Lost Sounds: Blacks and the birth of the recording industry 1890-1919, Tim Brooks devotes a chapter to Jackson and his handful of recordings and illustrates it with photos acquired from the British Library.  The main message of the lecture is that we should all drink more water – Johnson could hardly have imagined that a hundred years later nearly everyone could be seen with a plastic bottle of water in their hand or bag.

The Edison Bell recording is also an extremely rare disc, but in 1993 a Mr Gray brought his copy of it to what was then the National Sound Archive for a dubbing to be made.  Mr Gray had found it in a junk shop in Edinburgh in 1986.  I remembered seeing this on the Sound and Moving Image catalogue and years ago discovered a photograph of the disc labels in a drawer at the Sound Archive’s previous premises in Exhibition Road.  Today, after a little searching, I have discovered that photo so the disc can be seen and heard again more than one hundred years after it was recorded.

Johnson’s career from the beginning of the twentieth century is documented for us in a way that is given to few from that period.  His was also an important chapter in social history, one still resonating today with the President’s pardon.

Posted by Jonathan Summers at 12:16 PM