What are the uses of the recordings we make beyond preserving them? How might archiving wildlife recordings open up possibilities for interdisciplinary research, beyond the original purpose of the recording? During my anthropological PhD fieldwork with Batek people in Malaysia, which focused on their uses of music and sound, using wildlife sound recordings in the field created some interesting outcomes.

Batek people are indigenous hunter-gatherers of the lowland rainforests in peninsular Malaysia, numbering around 1,500 people. They speak Batek, an Austroasiatic language of the Northern Aslian family. 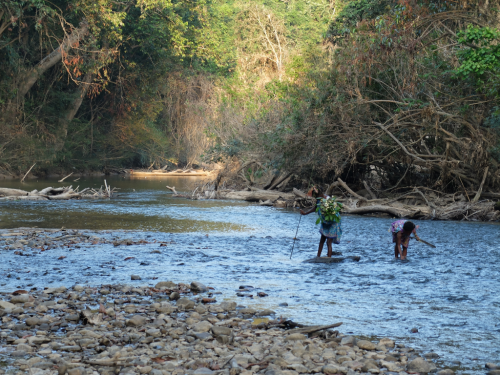 In a Batek camp, or when out in the forest, birds are a common topic of conversation, and under the dense canopy of the forest, birds are some of the most noticeable creatures, not because they are seen, but because they are heard (see also Lye 2005). All that might be seen is a flash of colour or a shaking leaf, but birds’ calls cut across the background hum of insects and chatter. Perhaps for this reason, birds are a major source of musical inspiration. Birds are cosmologically significant, too, and played an important role in creating the world as it is today, according to Batek origin stories (see also Endicott 1979). They are also used to make predictions - for example if you hear a certain bird you might know that certain fruits are ripe, that elephants are close, or that a friend will arrive home that day. Birds are often named onomatopoeically for their calls - for example the sŋseŋ bird has the call ‘seŋ-seŋ-seŋ-seŋ’.

This evident salience of bird sounds for Batek people meant that I was interested to document Batek names for various birds during my fieldwork - partly so that I could then ask further questions about them! However - when out in the forest, if we heard a bird and someone told me the name of it, it was difficult for me to then know the English name of it based on the sound alone. I therefore got hold of some of recordings of Malaysian birds, and, alongside showing them images from photographic field guides, played them to my Batek friends with the idea that they would be able to tell me the Batek names for the birds, which I could then compare to the English names noted by the original recordist. This proved a fascinating exercise - in particular as often there was not any one simple answer or direct correspondence between the English and Batek names for birds. For example, the aforementioned sŋseŋ was variously identified from the images as the Black-eared Shrike-babbler, Long-tailed Sibia, White-bellied Erponis, Oriental Reed-warbler, Arctic Warbler, Mountain Leaf-warbler, Chestnut-crowned Warbler, Blue-throated Flycatcher, Yellow-throated Flowerpecker, Crimson-breasted Flowerpecker, Orange-bellied Flowerpecker, and the Scarlet-backed Flowerpecker. However, from the recordings it was more definitively identified by different people as the Brown-throated Sunbird.

Furthermore, not only did people help me to document a lot of bird names, but they were also keen to recount stories and other information about the birds. For example, on listening to the Crested Jay, ʔEyJayat identified that it was a lhlah in Batek, but also recounted a funny story about coming across a tourist in the forest: the tourist was reaching up, trying to record the lhlah bird with their microphone - but this took ʔEyJayat, who was walking in the forest, by surprise as he thought the tourist was a ghost. ʔEyKtlət also remembered that the lhlah was the bird we had heard in the forest that morning when we had been fishing. He, his wife, and his son talked about how the lhlah has two sounds - syãl and llɛk. If you hear these sounds it means you won’t find food in the forest that day. If you are tired, and have no food, or only a tiny bit of food - you will hear it. If you get back home and your lean-to is damp - you will hear it. People therefore feel angry when they hear this bird! Through this exercise, Batek friends also taught me that the baləŋ bird indicates that elephants are close, as it makes the sound tuləŋ that imitates the sound of an elephant trumpeting, and that the maliʔ bird calls rain to come (ʔoʔ ʔajak ʔujan). The ləʔ talok bird (a type of Scimitar Babbler) - whose name literally translates as ‘indicates the Dusky Langur’ indicates that Dusky Langur are close!

The recording that people found the most hilarious was of the trut kit, or ‘fart’ bird - whose call sounds a lot like somebody breaking wind. Not only did I learn this funny name for the Mountain Imperial Pigeon - but also everyone fell about laughing about the bird, saying yɛʔ malɛs nir klɨŋ - ‘I really don’t like the sound’, imitating the sound, and then laughing again. In the Batek’s forest, however, laughter can be taboo (lawac), and risks causing a storm - and in the recordings people can be heard warning each other - ‘watch out or we will be lawac from laughing so much’. As well as giving information about birds, the new recordings of people listening to these recordings therefore also document something about Batek humour and taboos more broadly.

The jayit srwal bawac bird - which in English is the Chestnut-capped Laughingthrush - has a name which translates as ‘sewing the trousers of the macaque’. This bird also has other messages - as it is also heard as saying cok buŋah kwaʔ and jŋʔɨl tlok kawah - telling the listener to prepare the kwaʔ flower to be worn in the hair and to jump into the water at kawah - a part of the nearby river. These messages are ‘phonological iconisms’ of the birds call. In other words, the words sound like the sound of the bird. This bird is therefore particularly inspiring to and well loved by the Batek, it is strongly associated with a particular place and with flowers that the Batek love, and its call often therefore prompts exclamations of feelings of longing and nostalgia, which the Batek call haɁip. You can listen to the sound of the bird, followed by ʔEyKtlət repeating its name, in the audio excerpt below:

Through recording Batek people listening to the recordings, therefore it has been possible to preserve some of this complex and in-depth knowledge and love of birds that Batek people have, knowledge which is deeply connected to their forest home, and their daily experiences of the birds. The exercise has showed that wildlife recordings can have great use beyond documentation - in this case by providing a resource for eliciting, sharing, and in turn preserving, further unique knowledge, and providing a window onto important ways of thinking about the environment that challenge dominant discourses, and show the ways that human and avian lives can intertwine.

The Alice Rudge Collection is currently being deposited and catalogued with the World and Traditional Music collection as part of Alice's ongoing research with the Batek.

For more information on Batek people, see the following:

Rudge, A., forthcoming 2018. The sounds of people and birds: music, memory, and longing among the Batek. Hunter Gatherer Research.