An unknown recordist captured this Baluchi folk song with a cylinder phonograph in Dera Bugti in Baluchistan in the winter of 1911. He noted down some information, including place and time of recording, topic of the song and instruments, but no names of performers or music style. The cylinders were later received by Sir James George Frazer (1854-1941), author of The Golden Bough and regarded as the greatest of ‘armchair anthropologists’, who acquired a collection of about 2100 ethnographic wax cylinder recordings from all parts of the world throughout his life.

In the course of the current collaborative project involving the British Library Sound Archive and the Archives and Research Center for Ethnomusicology in Gurgaon, it became clear that the recordist documented the regional music genre Nar Sur. Named after the naḍ flute and the word sur for tune or melody, songs of this genre support the oral transmission of Baluchi history among communities. A notable feature is the throaty, drone-like singing style, while the flute player varies the melody. In the recording, the singer narrates the story of the battle between the Marri and Bugti people, the two largest ethnic groups of Baluchistan. 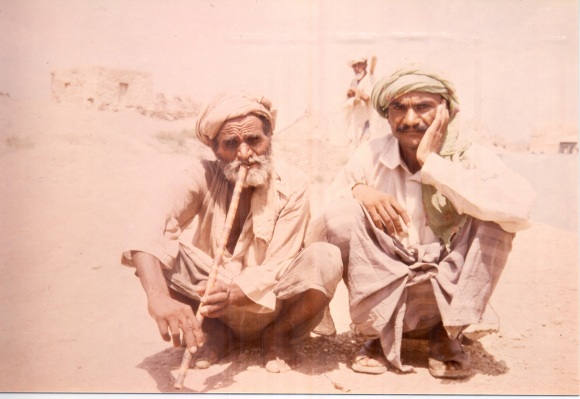 Another recording from September 1984, made by Nicholas Pierce in Kot Qaisrani in west Punjab, now Pakistan, features the singer Allah Bakhsh Qaisrani and the naḍ player Mohammad Bakhsh Qaisrani performing other folk songs in the Nar Sur style. The genre is practised along the Sulaiman mountain range in east Baluchistan till the present day and as literacy is still low in the region, the songs remain important means for the maintenance of Baluchi culture.

Many thanks go to Dr Janet Topp Fargion of the British Library and Shubha Chaudhuri of the ARCE for enabling this research, and to Dr Sangeeta Dutta for her support in the evaluation of recordings.

Christian is currently conducting his PhD, jointly supervised at SOAS and the BL, and is one of the researchers on the collaboration between the BL and ARCE, supported by the Rutherford Fund via BEIS. See International research collaboration on South Asian audiovisual heritage  for details of other work done during the project.