This week we feature a complete studio recording of the Indian poet Saqi Farooqi reading his work. The reading was made at the British Library almost exactly 10 years ago today. The poet reads in Urdu and English, with Richard Price from the British Library reading English translations of the Urdu originals. (Farooqi didn't trust himself to emphasize the right words in the English translations.) 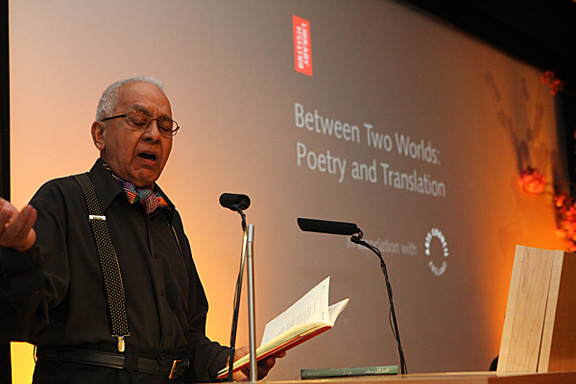 Saqi Farooqi was born in India in 1935. When he was 12 he moved to Bangladesh, and did his matriculation there; after four years he moved to Pakistan and did a B.A. at Karachi University; and in 1963 he settled in London, where he initially worked for the BBC's Urdu section, translating news reports.

In an interview made for the British Library at the same time as this reading, he spoke about the poetic philosophy he had followed for the previous 50 years; his admiration for the performance styles of Yevtushenko and Dylan Thomas; his opposition to 'clichés of language, emotion and thought'; and his guiding belief that poetry is 'a musical statement with intelligence'.

Poems read by Richard Price in English translation, then by Saqi Farooqi in the Urdu original: ‘Mastana Heejra’; ‘Spider’; ‘The Trust’; ‘An Injured Tomcat in an Empty Sack’; ‘To a Pig’; ‘Shah Sahib and Sons’; ‘The Hunchback’.

The English translations were made by Frances W. Pritchett, with the exception of ‘Spider’ - which was translated by Mahmood Jamal - and the possible exception of ‘Mastana Heejra’ (translator not known).

Poems composed and read in English by Saqi Farooqi: ‘Anne-Marie’; ‘The Life and Death of Mike Macbeth’; ‘Betrayal’.