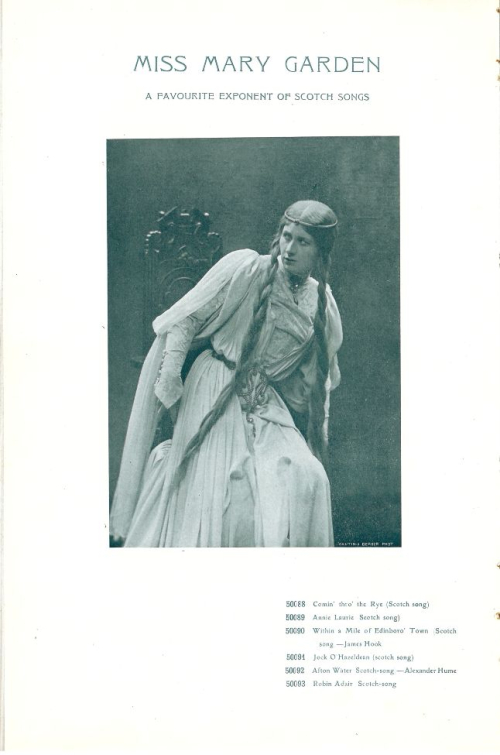 Page from 1904 Pathé catalogue with Garden as Mélisande (BL collections)

Soprano Mary Garden was born in Aberdeen in 1874.  Her mother was only fourteen years of age when Mary, one of four daughters, was born.  The family went to America when Mary was nine years old, so her formative years were spent there.  Her musical talent was evident at an early age; she studied in Chicago, then Paris where she made her debut with the Opéra-Comique in 1900 in the title role of Louise by Charpentier.  An ambitious and dominant woman, she had an affair with composer André Messager, twenty years her senior, who conducted her performances of Louise.  Garden starred in two world premieres and took on many other roles during these years as well as having a role written specifically for her by Jules Massenet – his opera Chérubin.  Her performance in the title role of Richard Strauss’s Salomé in New York caused a sensation not least by her performing the Dance of the Seven Veils in a body stocking.  Garden’s career was mainly in Paris and the United States, her only appearance at Covent Garden in London taking place in the 1902-1903 season. 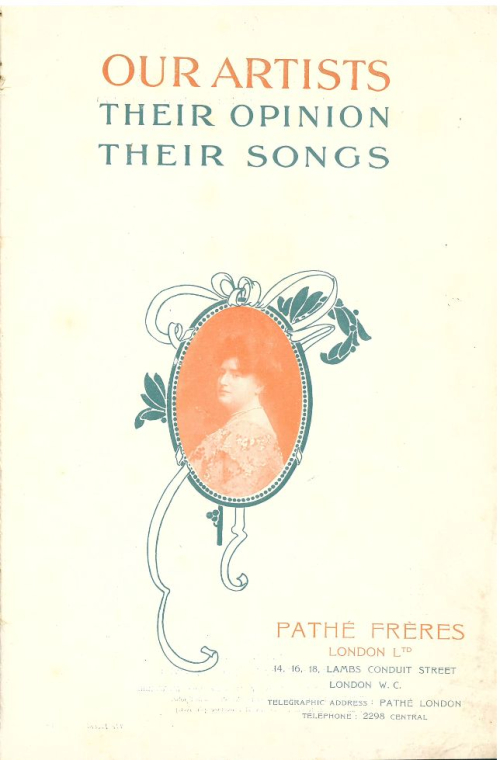 It was in 1902 that Claude Debussy selected her to sing the lead in his new opera Pélleas et Mélisande.  Two years later Garden made history by recording four discs for the Gramophone Company in Paris accompanied by Debussy at the piano.  These are the only sound recordings made by the great French composer.  However, during her visit to Britain around June 1903, Garden recorded six cylinders of Scottish songs for the English branch of the French label Pathé.  Two of these also appeared on disc at the time but the four remaining cylinders are of extreme rarity.  I was delighted to find that local collector Richard Copeman recently acquired one of these elusive four from a Scottish collector, as they have never been heard since their release in 1904.  I would be pleased to hear from anyone who knows of the whereabouts of any of the other three cylinders.  Although Mr Copeman had made a transfer of his cylinder, our engineer Rob Cowlin experimented with different sized styli until we got the best sound.  Thanks to Mr Copeman we can all now hear this major rarity.  Garden made three further cylinder recordings for Edison in 1905, discs for Columbia in 1912 and Victor in the late 1920s.  She retired from the opera stage in 1934 eventually returning to Scotland where she died at the age of 92 in 1967.

Posted by Jonathan Summers at 2:38 PM