To me, sea shanty singing is as nostalgic and drippingly lovely as a freshly pulled pint of real ale. As a teenager, I used to huddle into the back room of the Jacob’s Ladder Inn in Falmouth with a few friends as part of our own sea shanty group. Taking in turns to be the lead vocalist (or ‘shantyman’) we ran through a whole repertoire of maritime songs that had been preserved (mostly) faithfully from the crews on board British sailing ships throughout the 19th Century.

With this in mind, today's Recording of the Week is the tune Bold Riley (Roud 18160), a traditional tune from the sea shanty group The Press Gang as part of the International Sea Shanty Festival that takes place every year in the height of summer. Like each of the 88 acts involved in the festival, The Press Gang approach shanty singing in their own unique way, mixing traditional British sailing songs with rock 'n' roll guitar. 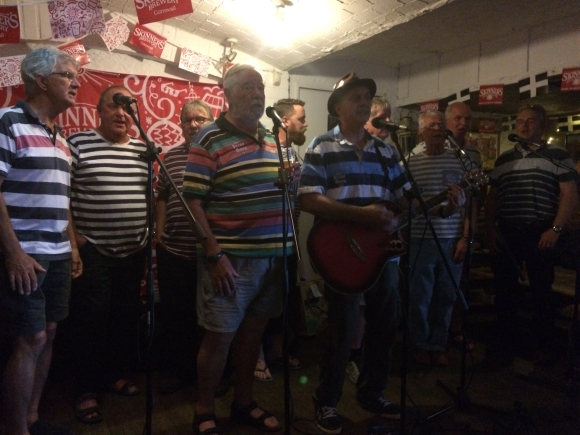 While acts travel to the festival from all over the world to perform and raise money for the RNLI, The Press Gang also organise their own smaller Sea Shanty festivals nearby in Cornwall for equally good causes. Thanks go to The Press Gang for allowing us to feature this recording and to the organisers of the festival for helping us record a large chunk of the whole festival.