Recording wildlife in the dark

There are plenty of positives when it comes to digitising archival sound recordings. Long term preservation and improved access are top of the list, however the opportunity to easily explore thousands of freshly digitised files is a curator’s dream.

The library’s Unlocking our Sound Heritage project has digitised an impressive 18,000 wildlife recordings over the past 12 months and this has brought a range of interesting content to the surface. One of our recent favourites is a nocturnal recording of Golden Plovers in the highlands of Scotland. The recording is wonderfully atmospheric, with Red Grouse and Snipe adding to the moorland soundscape. Yet this isn't the only thing that caught our attention. The accompanying metadata, provided by the recordists Charles and Heather Myers, demonstrates the difficulties of recording wildlife in the dark, especially when you encounter unexplained sounds.

Though our Golden Plover recording is dominated by bird calls, it also contains the grazing sounds of an unidentified animal. Charles & Heather were both accomplished naturalists and could identify the songs and calls of British wildlife with ease. Non-vocal sounds however, such as movement or eating, could leave even the most talented individual stumped.

You may be thinking "But couldn't the recordists just take a peek in the direction of the sound?" The answer is, not easily. The recording was made on remote moorland in the dead of night. In addition, the microphones had been placed over 45 m away from the camper van where their recorder was being operated. The only thing left to the Myers' was the power of deduction, as can be seen in the following recording note:

"As I was unsighted it is all guess work. But one thing is certain: the birds were very close. There were Red Deer about so I assume the grazing sound was made by one of these (was it a swishing tail that caused the bump on the mics?) You can hear him stop grazing & trot away to the right (3 min. 13)" 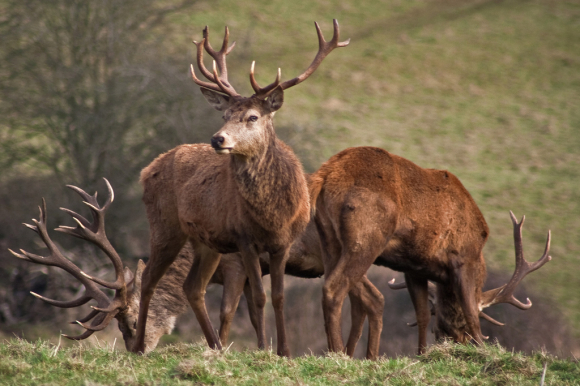 Could a hungry Red Deer be the source of our unexplained grazing sound?

We'll never know whether the Myers' did record a Red Deer grazing on the moorland turf. Unidentified sounds are often part and parcel of the field recording process, so it's down to the recordist (or the curator!) to fill in the blanks. But, at the end of the day, that's all part of the fun.