‘It looks inevitable, but it is a long process of trial and error’.
Architect Neave Brown on the Alexandra Road Estate 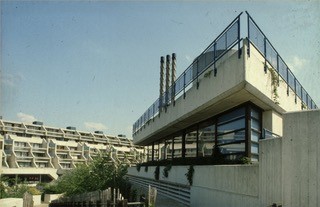 This weekend London opens its doors to a range of fascinating buildings; many of which are usually closed to the public. They span a range of architectural styles and time periods – from grand public buildings to small residential spaces. Open House, established in 1992, encourages people to explore and interact with London’s architecture – and it is wonderful to see how it has grown in popularity. One of the highlights is the Alexandra Road Estate. It was built during the golden age of Camden Council’s architects department in the 1970s. Encouraged by Borough Architect Sidney Cook, the design by architect Neave Brown eschewed high-rise for high density using a horizontal street pattern. Concrete was used for both the structure and the form. Working as part of the team were a talented group of young architects: Benson and Forsyth, Eldred Evans and David Shalev. It was awarded Grade II* listed status in 1993. Neave Brown received the commission as a young architect after having designed small residential blocks in Camden, in his recording he recalls ‘it was the most astonishing brief ever’. Listen to his extract here:

Architects’ Lives offers another way to explore some of the highlights of Open House. It has unique recordings with the creators of these buildings and gives a chance to explore the genesis of some of London’s landmarks. We now hold recordings with the architect – Neave Brown, but also the structural engineer, Tony Hunt, and the services engineer, Max Fordham. Together they form a rich tapestry of the context of the project. In this extract, Tony Hunt describes how the three of them, who had first worked together on housing in Winscombe Street in Camden, came together as a young team and responded to the challenge of the site which ran alongside a railway track: 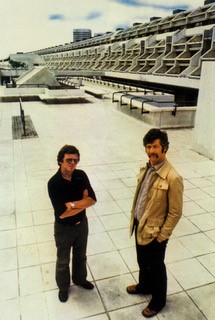 Blog by Niamh Dillon, Architects' Lives Project Interviewer. Architects' Lives was established in 1995 to document the life and work of British architects and their associates over the course of the 20th and 21st centuries. Neave Brown's complete interview can be listened to online at BL Sounds. Both photographs in this blog post were taken by Pat Hunt, the second shows Tony Hunt and Richard Clack on site at Alexandra Road in the 1970s.

Posted by Charlie Morgan at 5:13 PM