Recording of the week: Whistling to the bujɔk - Batek fishing techniques

The Batek are a hunting and gathering people who dwell in the lowland rainforests of Peninsular Malaysia. When visiting recently, I accompanied Batek friends on a fishing trip and was taught some new techniques.

We left early in the morning, as the river they wanted to get to was a long way from the camp, around three hours walking up and down very steep hills. As we set out, they noticed elephant tracks very close to where we were going, and when we got to the river confluence, ʔEyKtlət went ahead, and found the elephants bathing just upriver from where we had planned to go.  We changed our course and instead of following the main river, we followed one of its smaller tributaries. 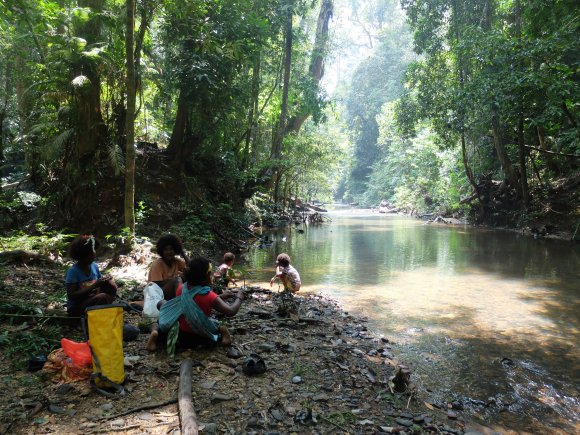 Batek people usually make fishing rods (bawɔl) en route to the river by scraping the leaves off palm fronds, leaving only the supple, strong stems. Fishing line and a hook is then attached to one end. For bait, people dig worms from the sides of the riverbank.

With the Batek, fishing trips usually consist of a lot of walking. Having reached the river through the forest, you then wind your way back to the camp via the water, either upstream or downstream, by wading and scrambling up and down the banks. As you walk, you fish in any suitable places that you spot. 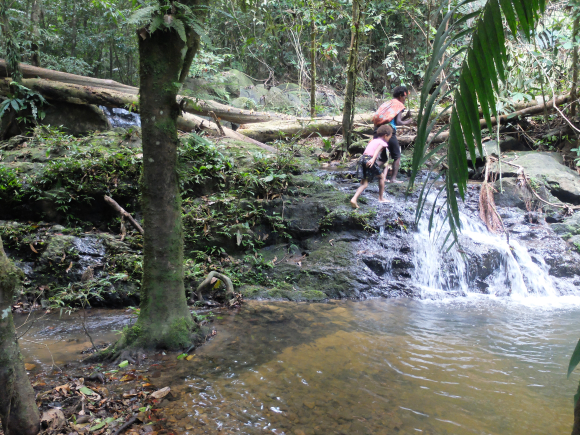 In one spot that we reached, NaʔSrimjam started whistling. I initially thought nothing of it. Then her sister, NaʔAliw, started whistling the exact same melody… I asked what they were whistling, and they said that they were calling the bĩl fish [unidentified] to them. We had been catching bĩl earlier, and so, knowing that they were biting that day, the sisters were whistling to attract more! They also told me there are other sounds you can do to attract certain fish to you. One of these is a kind of clicking sound made at the back of the throat, which can be used to attract bujɔk (Malay bujuk, of the family Channidae).

‘when you attract bujɔk you see it coming to get your bait, you see tiny bubbles rising to the surface of the water, then cɨ̃t [expressive of the sudden sound or feeling when a fish bites your bait]! The fish will accidentally hook itself onto your fishing hook, and you lift it out’.

I didn’t manage to record the sound while they were making it in the forest that day. I was busy fishing myself, and trying not to fall over on the slippery rocks or sink into the mud. So, the next day I went to NaʔSrimjam and asked if she would make the sounds again so I could record them. 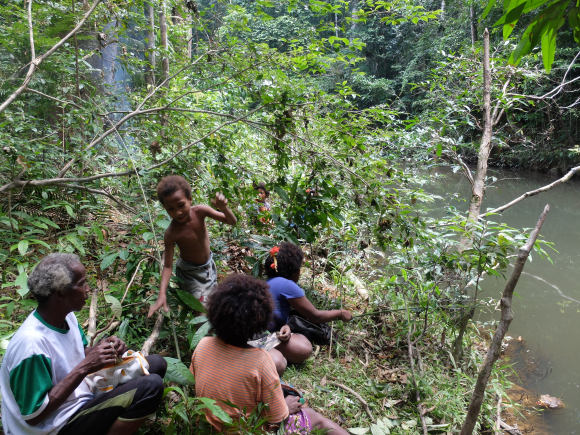 Sitting down for a moment to fish

She agreed, but when she tried to whistle, the sound wouldn’t come out, and we both cracked up laughing in hysterics. She kept telling me to just do it because she was laughing too much to whistle, but I said no I wanted to record her, because she was the one who knew how to do it - I had no idea! Eventually she managed to get the sound out. I then asked her to do the clicking sound made in the back of the throat that is used to attract the bujɔk fish. After she made the sound, she then tried to teach me to do it. This meant it was my turn to make a fool of myself as I couldn’t make the sound at all. When I eventually got some sound out, we joked that it was so bad that the fish would just swim away. This whole exchange can be heard in the recording.

The Alice Rudge Collection of Batek recordings is currently being deposited and catalogued, and will be held under the shelfmark C1773.

Follow @_Aliz_, @BL_WorldTrad and @soundarchive for all the latest news.