Recording of the week: a high fidelity direct recording

Instantaneous lacquer discs frequently contain unique or rare recordings and, due to the instability of their sound carrying layer, are a preservation priority at the British Library Sound Archive. Also known as acetate discs, they generally consist of a metal substrate coated in a lacquer of cellulose nitrate which is modulated by a cutting stylus. The process is still in use today, comprising the first step in the manufacture of vinyl records. Many of the lacquers in the British Library’s collection were cut ‘on demand’ – direct to disc from radio broadcasts for patrons by independent cutters, such as W. H. Troutbeck of Twickenham. Today’s disc contains excerpts from “Visions of Saint Godric”, by Peter Crossley-Holland, cut on 17 October 1959. 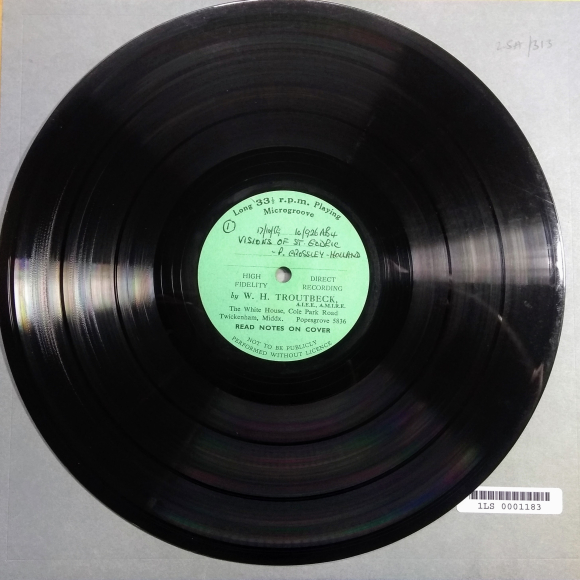 Cellulose nitrate degrades continuously over time, as it reacts with water vapour and oxygen, resulting in the eventual shrinkage of the lacquer layer. As the metal substrate cannot shrink, the lacquer cracks and flakes off resulting in the inevitable and irreversible loss of the sound carrying layer, hence their preservation priority status.

Lacquers from the 1950s onwards can be played like any other microgroove disc, with a lightweight elliptical or line contact pickup tracking at around 1.5 grams. Coarse groove lacquers also exist, so playback parameters may need to be modified to accommodate a wider groove. Test with a microgroove stylus first though.

This disc was cleaned in an ultrasonic bath using a solution of 1 parts photographic wetting agent to 70 parts deionised water. Like shellac discs, lacquers should not be cleaned with alcohol. Some instantaneous discs were coated with gelatine rather than cellulose nitrate. Gelatine reacts badly when exposed to water. I always perform a patch test on a non-modulated area before cleaning. Apart from digitising, one should avoid playing lacquer discs due to their fragility.

The disc in question is in very good condition considering its age, with no signs of delamination and only minor scuffing, it retains its deep shine when held to the light. Apart from some pops and intermittent surface noise, the sound quality is excellent. I’ve chosen a short passage that highlights the format’s ability to convey low-level detail – listen out for the audience!

I’m giving a presentation on signal extraction from lacquer discs at this year’s British & Irish Sound Archives conference at the National Library of Wales on 17 November. More information about the conference can be found at http://www.bisa-web.org/next-event