Recording of the week: from the days of the demo tape

When you work in a sound archive it’s not uncommon to find yourself drawn into a listening experience which is both immersive and enriching. For me, one of these moments arrived with a demo tape from the Serious Speakout collection (taken from the name of a London-based  promotion company active during the 1990s).

At the end of the recording I scrutinize the inlay. Who is behind this band? What is their story? I realize that, in a collection of over 700 demo tapes, this is the only all-female band I have come across. I manage to contact one of them on Facebook. After twenty two years they kindly agree to gather together again and recount their past. A Skype call doesn’t feel right. Three weeks later I fly to Bologna to meet them: Daniela Cattivelli, Silvia Fanti, Filomena Forleo, Olivia Bignardi, Flavia D’angelantonio, Margareth Kammerer. Respectively, saxophone, accordion, piano, clarinet, bass, and vocals of ‘Fastilio’. 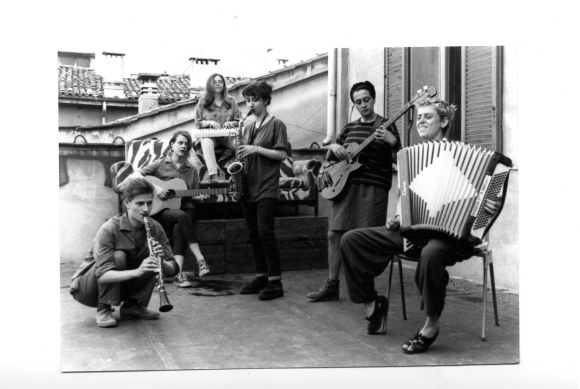 Fastilio, soon after forming, rehearsing at the occupied School of Arts, Music and Theatre - University of Bologna. Photo by Nanni Angeli

Formed in late 1991, the story behind this experimental band is one of genuine curiosity for sound and its potential, playfulness within rigour and commitment, and risk taking. All six were enrolled at the University of Bologna’s School of Arts, Music and Theatre, which was at the time under student occupation. They met when they joined, with little musical knowledge, Laboratorio di Musica e Immagine. This was a fourteen member group with a strong socialising energy, working on collective improvisation and composition to create music for silent films.

After a year and a half they decided to try and rehearse on their own to express themselves more freely, curious to see what type of sound would come from such a diverse group of people, with both different backgrounds and creative ideas. They called themselves ‘Fastilio’ from the Italian ‘Fastidio’, meaning nuisance. Although lacking in experience, their plans were both influenced and inspired by the thriving scene of the time: concerts of experimental music, festivals featuring musicians from the Rock in Opposition movement and the Canterbury Scene, and seminars with composer and improvisor Fred Frith.

They had been rehearsing for around four months when their first concert opportunity cropped up in February 1992. Their bass player had only picked up her bass for the first time a few months earlier, and yet the festival they were invited to featured musicians like Robert Fripp and Michael Nyman. Fastilio were offered joint billing with experimental violinist Jon Rose on opening night. Amid hesitation and excitement, short in repertoire and training, they eventually accepted. And there they were on stage with Jon Rose who, seeing how nervous they were, made shoulder muscles stretching a part of the performance. This first concert was a breakthrough; it taught them to be brave. 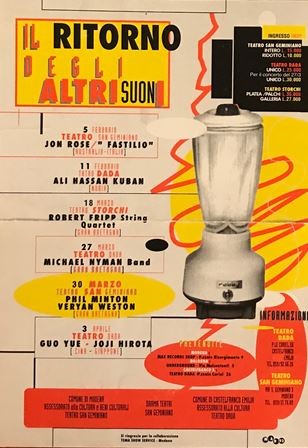 Flyer for the group's first concert. Photo by Francesca Ponzini

Over the next five years of their existence, this band of girls in their mid-20s, committed themselves to sound. Each with different skill levels and musical personalities, Fastilio put into music their wishes of sonority, through reciprocal listening, improvising, experimenting, composing and, essentially, choreographing sound. Fastilio define their music as ‘twisted’, because of the changes in perspectives, the circularity of themes and the odd succession of harmonic and contrasting sounds.

Gradually they found themselves opening concerts for renowned musicians like Steve Coleman, performed in international festivals, jammed in cultural centres throughout Europe, and collaborated with different artists in anarchist houses in the Slavic countryside.

The following excerpts are from a live gig recorded in Imola, September 1993

Follow @lcavorsi, @BLSoundHeritage and @soundarchive for all the latest news. Many thanks go to the members of Fastilio for their help with this piece.

Digitisation, Jazz & popular music, Music, Recording of the week, Save our Sounds, Sound and vision