Religious unbelief in the life of Professor Sir Fred Holliday

Over half of respondents in the most recent British Social Attitudes survey indicated that they have ‘no religion’. All evidence suggests that the majority of this group are also either atheist or agnostic. We are able to say, then, that religious unbelief affects a very significant proportion of British people, but what else can we say about it? Religious Unbelief is little studied and not well understood, a situation that the £2.3m Understanding Unbelief project at the University of Kent seeks to change.

In a partnership with the Understanding Unbelief project, National Life Stories at the British Library is examining some of its collections of oral history recordings, with unbelief firmly in mind. What do interviewees – recorded in projects with no particular focus on religion – say about their lack of religious belief? This blog reports on one discovery: the presence of unbelief in an interview with Professor Sir Fred Holliday, recorded in a number of sessions between 2009 and 2011, part of the collection ‘An Oral History of the Water Industry’.

Fred Holliday [1935-2016] was a marine biologist who served as founding Chairman of Northumbrian Water, Vice-Chancellor and Warden of the University of Durham, Director of Shell and of British Rail. His obituaries tend to comment on his interest in science as a child, usually mentioning the decomposing snake under his mother’s bed. None that I have seen refer to his equally longstanding interest in and engagement with religion, strongly present in his British Library interview. In this interview he explains that from “about the age of twelve” he became closely involved with the family of the local Methodist minister (“they more or less adopted me [...] I learnt so much from him”) and that, because of this, he began to “announce hymns in the chapel, even try my best at a sermon”. The interviewer asks how he felt about giving these sermons, and Holliday’s reply stresses that he treated them as intellectual projects and as performances: 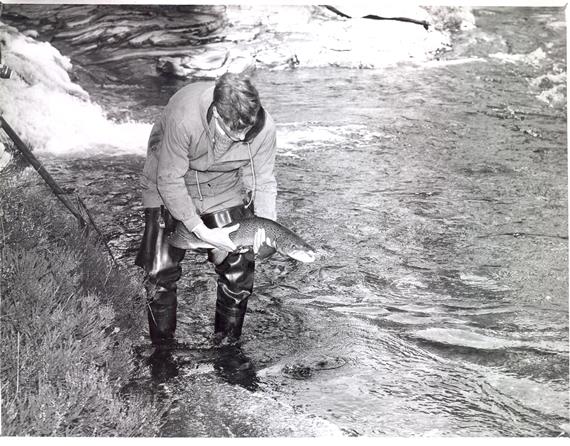 Sir Fred Holliday on the River Dee in Scotland as a young researcher, December 1960

In this clip, Holliday is keen to explain that in writing and giving the sermons, he was driven not by religious belief of his own (or even a valuing of religious belief in general), but by the enjoyment of cerebral work (“I did enjoy taking a really tough, tough Old Testament passage and – what I now know to call an exegesis – [laughs] and really unpicking it”) and the enjoyment of being looked at and listened to (“I liked attention I guess”). Nevertheless, he was clearly a Christian unbeliever (rather than, say, a nonreligious unbeliever); his unbelief was experienced through engagement with Christianity.

As the interview moves forward, Holliday confirms that he was not affected “in any [laughs] spiritual or religious sense” by the experiences in the chapel and that he differed from the Minister who “had a very, very strong inner faith” and from members of the “working class” congregation who were imagined (by himself and the Minister) as simply ‘having’ “belief”:

Fred Holliday on belief and on his scientific training (C1364/5)

In those days, because I was also studying science, creation stories used to intrigue me. And I always used to [pause] always used to say [...] [to the congregation] “you shouldn’t, shouldn’t take these literally – this is how it – a) how a primitive people were trying to explain a complex event and secondly they were using parallels and examples”, you know. [...] And I had to find a way of not upsetting my audience – particularly not upsetting my good friend the Minister
Well I was going to ask, how did he respond to your sermons?
[...] I tried – he said to me and it stuck [...] he said to me, “don’t undermine the peace of mind of people” – he always used to say the widows and orphans – “don’t undermine the peace of mind of the widows and orphans; these people come because they couldn’t live in their bleak, bleak world if they didn’t have this belief. Now you might think it clever to pull that down but I don’t and I hope you don’t”, he would say to me. And I agreed with him. Why should I pull that down? So I had to steer this course between being true to my own belief or lack of it – and I still do have to steer this course – and not, not betray my science training which tells me there is no interventionist god and [laughs] the widows and orphans who desperately want an interventionist god and a life hereafter. [C1364/5, Track 2, 1:11:03-1:14:03]

In line with observations in Lois Lee’s Recognising the Non-religious (2015), we might note that while Holliday sees the (religious) worldview of others as a source of psychological comfort, he does not seem to see his own “science training” and its associated worldview as offering him anything analogous.

Holliday took his own “belief or lack of it” forward in a life that included more sermon-giving: “I’ve preached in the Church of Scotland and I’ve preached, God help me, in York Minster and Durham Cathedral since”. As Warden of the University of Durham, he interacted with the then Bishop of Durham, David Jenkins, who he says “agreed with me” on aspects of Christian non-belief but who “outraged the congregation at Durham cathedral, and he did what Mr Homer had told me never do: he attacked the widows and orphans, not willingly and knowingly but he was less willing to compromise than I was”. Holliday himself continued – at least until this first interview session in 2009 – to want to describe publically the shape of his Christian unbelief while not “upsetting” his audiences:

Now if I’m lecturing locally in a rotary or a Women’s Institute or whatever people say to me, do you believe in God? You know. Come on: be open with us. And then I say yes, but not – but I believe in what I would call Einstein’s god, in other words, sooner or later you’ll be able to express my idea of god in a formula - I believe that there are certain physical laws under which the universe was created and those physical laws predated the creation of the universe and whatever they are that’s – there’s my god. But that is not an interventionist god. And doesn’t need worshipping – needs understanding. [...] And then people say, “ah, crikey, are you a Christian?” And I say, “yes I call myself a Christian – I’m a member of the church because I find in the New Testament and in the sayings of Jesus”, whoever wrote them – I don’t know who wrote them – [...] “an ideal which is worth following, which is worth hanging onto” [...] and I’m a member of the church not because I subscribe to the apostles creed or, or the hierarchy of the church but I find there an interesting philosophy. [C1364/5, Track 2, 1:16:04-1:17:42] 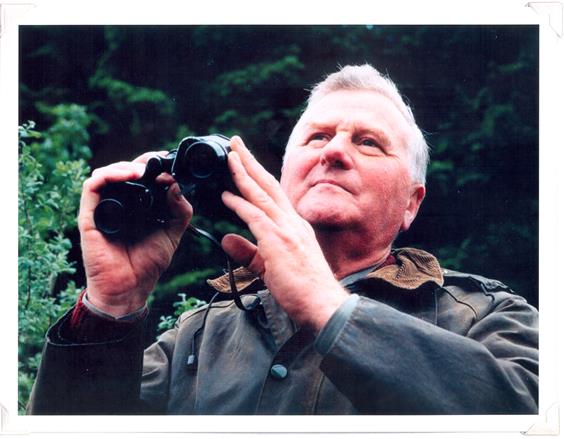 At this point in the interview, he expressed his opposition to the form of unbelief promoted by fellow biologist Richard Dawkins: “read his work, know it, sympathise with a lot of it, but why oh why does he become so evangelical in this atheism”. Two years later, in 2011, when he recorded the final interview session, his position may have shifted. A period of treatment for “quite an aggressive cancer”, involving hospitalisation, seems to have made him question the value of preserving conventional religious faith in others – an experience that runs counter to what is widely held to be the case, that personal crisis encourages religious belief (though this assumption is challenged in writing by Richard Dawkins, Christopher Hitchens and others, as well as in emerging findings of research led by Christel Manning):

Fred Holliday reflects on his approach to religion (C1364/5)

Is there something that you wish you’d done, or can you identify opportunities that you wish you’d taken – is there something really particular that you could do differently?
[pause] I wished I’d been able to convey to pupils and students a little more of our relationship with [pause] if you like where we have come from and where we are going. I think young- a lot of young people, and I don’t want this to sound patronising and I’m awfully bad at that. I often feel that they don’t know where- why they’re here, they don’t know where they’ve come from, they don’t know where they’re going – no matter how well educated they are, they often feel: I’ve seen too many students to know that this is true – that there are a lot of them saying: well what am I doing here, you know, why am I doing this? Is there a- am I part of a big pattern? Am I on my own and if I’m on my own, how can I, how can I justify this lonely existence, you know? [...] And I know there’s a great, you know great rumours of churches collapsing and so on – they’re not: around the world [...] religion shows no signs of collapsing; it might in this bit of Britain, but on a worldwide basis there’s no signs of it happening. But are people really understanding what’s being pushed at them? If faith is important and belief is important, then it’s crucial that they know what they have faith in and what they believe in. It was brought home to me in hospital where I heard, on more than one occasion, people praying for their own recovery, desperately, and I knew that they were talking to thin air, you know. [pause] But I, well, can’t say anything. Erm, talk to the doctors by all means. Talk to your consultant. Erm, maybe, maybe the visiting minister, the visiting pastor, visiting priest can help in bringing some peace of mind and that may be therapeutic but when I heard people pleading – beseeching a god to make them better or their child better – I heard it – I thought to myself: are we letting these people down, you know? What are we giving them? So I think that I would have liked not to have gone into the church – cause I couldn’t stand that, and I don’t have the right faith to do it – but we’re not managing to get across to people, erm, the limits of their own humanity. Now, there are a lot of contradictions in all of that because I call myself a Christian but I do think we have not done a good job [...] we haven’t done a very good job in providing people with a rock to stand on, you know. So I, you know, regret not being able to make more progress with that, erm, maybe I should have been more willing to stand up and, and [pause] and do my best to get people to see what it’s like to be a product of evolution on what is, I think, a pretty lonely planet, you know. This is what this last year has done you see [laughs]. [C1364/5, Track 19, 1:06:28-1:11:29]

Holliday’s generosity in giving up precious time to record a final interview session has afforded a relatively rare direct view of personal change over time. He shares the particular sights and sounds that unsettled a long-held combination of personal unbelief and valuing of religion. His reflections are detailed and multi-layered, but he certainly seems to have come to question the golden rule of his mentor: “don’t undermine the peace of mind of the widows and orphans”.

This blog is by Dr Paul Merchant, Oral History Interviewer, National Life Stories, The British Library. Alison Gilmour interviewed Sir Fred Holliday for An Oral History of the Water Industry. The complete interview can be listened to on BL Sounds.

Posted by Camille Johnston at 6:02 PM