Have you ever wandered around the British Library in St Pancras and been intrigued the art, architecture and spaces? Perhaps you’ve enjoyed an exhibition at the Library and wondered how it may have inspired other visitors? Have you ever wanted to hear more voices from the many narrators in the sound collections? Want to make the most of Black History Month 2018?

Then lucky you – we have the perfect way for you to spend 40 minutes of your time this October!

As part of the Unlocking Our Sound Heritage project and inspired by the Windrush: Songs in a Strange Land exhibition four talented young scholars have been exploring the British Library oral history collections to highlight voices from Caribbean migrants. The sound tour guides will lead tours through the St Pancras building – playing excerpts from the sound recordings in key locations to shed new light on the architecture and artwork on display. 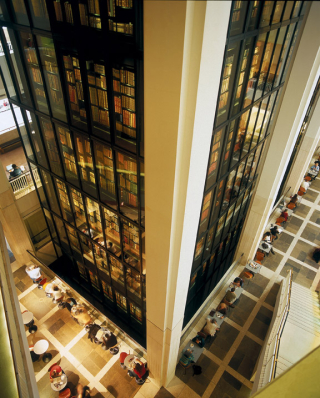 The sound tour guides; Korantema Anyimadu, Amelia Francis, Ayomide Oluyemi and Shani Page-Muir, each give a tour based on their own research – focussing on a variety of themes including – ideas of ‘home’, arrival and reception in the UK, identity and politics, community organisation and mid-20th century awareness in Britain of life in the colonial empire.

Ayomide gives an insight into just one of the clips she selected and edited, from the life story interview with Donald Hinds, (b. 1934 in Jamaica) who, after his move to Britain, became a published author reflecting on the experiences of West Indian immigrants. Ayo commented, “I found it striking in this section of the interview that some of pieces of literature Hinds found significant growing up in Jamaica were books that we see as very 'British.' He also touched upon two important Jamaican figures, Marcus Garvey and Harold Moody, who immigrated to Britain in the earlier part of the twentieth century which highlights the role pre-Windrush migrants.”

Donald Hinds reflects on his favourite literature, and the books he read whilst at school (C1149/25)

During her Sound Tour, Ayo chose to play the audio by The King's Library. She explains, “George III's collection spanning almost four centuries and many forms of writing, feels like the core of the British Library to me. It's probably the British Library's most visible text collection to the visitor and it felt appropriate to hear Donald Hinds’ voice there – as he is well known as a writer.”

Designing and leading the sound tour was a new experience for Ayo, “Although talking about history is one of my favourite things and I was very excited at the idea of getting to create my own tour, at the start I was very nervous. Feeling more confident with practice tours, being trained in how to edit sound clips and learning about oral history have been wonderful skills to gain. I'm going to miss this project when it's completed!”

After spending 40 minutes on a tour we are confident that you will see the British Library building with fresh eyes and will want to revisit the excellent exhibition and find out more about Unlocking Our Sound Heritage.

Posted by Charlie Morgan at 1:16 PM