In 1995, the British Library began documenting oral histories of British architects through the National Life Stories series Architects’ Lives. The following year the project looked close to home and published an interview with the architect of the library’s St. Pancras location. In twenty-seven parts available on the BL’s Sounds website, the librarian and curator Jill Lever (1935-2017) speaks with Colin St John (Sandy) Wilson (1922-2007), covering a wide range of subjects including his career, past projects and approach to creating public spaces.

Initially this series had been recommended to me by Oral History curator Mary Stewart after I asked colleagues if anyone knew anything about some wooden benches I had seen at the library. Simple and sturdy, reminiscent of mid-century modern Scandinavian design, initially I had just wanted to know who made them – was there a small British furniture company still making them? Had a well-known designer made a little-known range of furniture for the library? While still largely a mystery despite the enthusiasm of colleagues, I found something more interesting through this research. The original furniture to the building, much of it still here twenty years after its official opening, was a crucial part of fulfilling Wilson’s overall vision for the building and his idea of how a library should work and make its readers feel. Largely designed by Wilson himself, the original furnishings, built-in nooks, and other seating were important parts of his approach to scale. In one section of the interview, he describes the point of preserving a balance between a grand, large, space coming in at two hundred thousand square metres and one scaled for individuals:

“Eventually you have to accept that a lot of other Readers and the architecture makes the sort of spaces in which you can read, you can spend the whole day, you don’t feel claustrophobic, you have the chance of looking up from the close range of a book to the long distance of a big space.” 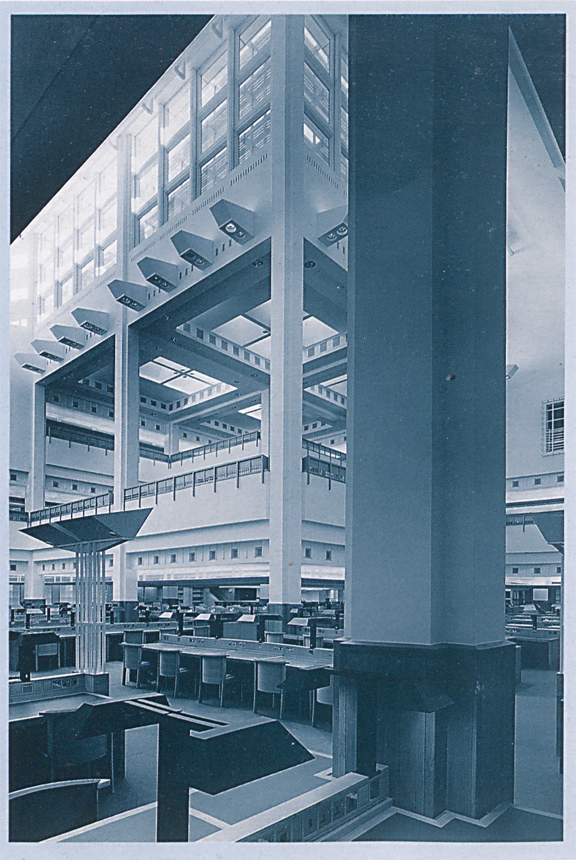 Wilson designed tactile, personal elements throughout the building in order to balance the large scale demanded of a building with innumerable collection items, which now greet over 1.5 million people annually through the compact front entrance into the spacious multi-storey lobby. Portholes throughout the building provide small windows onto the grand area of the main lobby on its main and upper ground floors.

One of the ways Wilson attempted to create this balance, and thus serve what he saw as the larger purpose of a public building, was through his use of tactile, natural materials. Inspired by architects of the English Free School, among them Sir George Gilbert Scott who designed St Pancras Chambers next door, William Morris, and John Ruskin, he chose wood panelling, leather-covered wooden benches and booths on nearly every floor of public space outside the reading rooms, and leather-wrapped brass railings a la Aalto, and carved person-sized seating into marble wall detailing on multiple floors.1

Other designers were commissioned to help create this balance. The reading room chairs still in use today are original to the library, designed by Ronald Carter. This was one of his largest commissions, although he also designed furniture for other cultural institutions in London like the Victoria and Albert Museum.

Wilson thought that if this balance was struck correctly, he could create the kind of public building in which an initial feeling of getting lost would soon be replaced with an ability to “help yourself and get on with it,” much as many do every day at the library, arriving at the front door with their clear plastic reading room bags, ready to use for second, third, and forth times in the workspaces readers often come to think of as their own.

Mary Caple is a postgraduate student in History of Art and Visual Culture at the University of Oxford, formerly Digitisation Workflow Administrator for the British Library Qatar Foundation Partnership. Special thanks to Dave Stevens for scanning the copies of Shelf Life, the British Library staff newsletter, from which images of St Pancras came from.