When the cows come home - a mooving translation

Have you ever had trouble explaining the definition of a word, and even more so, conveying an idiom in literal language? An idiom is defined by Oxford Dictionaries as:

a form of expression, grammatical construction, phrase, etc., used in a distinctive way in a particular language, dialect, or language variety; spec. a group of words established by usage as having a meaning not deducible from the meanings of the individual words.

It is clear from this submission to the Library’s WordBank, and many like it, that thinking about how to deconstruct idioms can take us further and further out to sea. One London-based contributor, born in 1972, who defined her accent as belonging to Wigan in the North West of England, and who had also lived in the Midlands, explains Bun Tuesday. Appropriately enough, while listening to her recording, we avoid ever arriving: 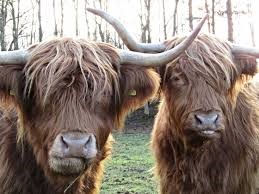 I encountered my favourite equivalent of when the cows come home when visiting my friends Dana and Mike in Albuquerque. For this bilingual (Spanish-English) Coloradan-Nebraskan household based in New Mexico, an event that is never gonna happen is foretold with the kind counsel don’t hang your hat on it. This metaphor draws on the same idea that connects arrival, millinery and belonging in the phrase (and famous song lyric) wherever I lay my hat, that’s my home. The advice to not hang my hat on it conveyed the same message as don’t count your chickens, because the promised event we were discussing would happen when the cows come home.

Of course, for those of us who grew up on the Isle of Wight, there are certainly times in the year both when the cows come home and when they can be found further afield. Cows may not hibernate, but they do ‘winter’. This is why every year, at the start of autumn, the cattle population of Culver Down increases. The western side of the Down hosts a visiting herd, which comes from a nearby farm to enjoy its gentler southern—albeit extremely blustery—climes. (Some of us even remember the seasons years ago during which the Island’s resident highland herd could be found on the clifftop.) When the cows come on holiday is a good time for islander bovine enthusiasts. Domestic cattle are skilled at recognising individual animal and human faces over long stretches of time, so they have a sense of those who feed and, like me, visit them both home and away.

Cows are also highly intelligent animals. Tours of the American poet Robert Frost’s farm in Derry, New Hampshire, recount how he trained his dairy herd to be milked at midnight rather than at dawn and dusk, so as to accommodate the writing schedule that he maintained alongside his other labours. Whatever time of day it is, and however familiar their human might be, cows rarely rush for anyone. Therein lies the origin of the phrase when the cows come home: the splendidly unhurried pace of a cow.

If we agree, then, that like many idioms, when the cows come home enjoys the “poetic licence” of exaggeration, we can start to understand some of the issues involved in defining the phrase and its equivalents. Furthermore, that which is temporally ambiguous and indeed never going to transpire is in essence a challenge to pin down. There is poetry in this too, because poetic language from north to south makes similar demands: poet-translators have for centuries agreed that the full content of a poetic line is rarely, if ever, encapsulated entirely when grafted across to another language via definition, syntax and form only. The task of defining or explaining an idiom involves a similarly challenging ‘translation’ of sorts, from poetic language to literal terminology.

Although recordings preserved in the WordBank capture what linguists call the elicited speech (invited verbal information) of our contributors, rather than spontaneous speech (overheard conversations, as in the Listening Project and much of the Library’s Oral History collections), and the latter typically provides an unfettered example of accent and verbal patterns, the former is interesting in terms of what we might term spontaneous definition: our contributors became unscripted dialect translators. While thinking from the top of their heads, many naturally resist undoing the original dialectical structure to the very end.

The following definition-by-chain-of-similes stays true to its poetic form and takes us into more and more interestingly specialist territory: 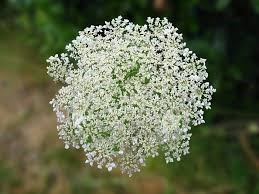 The contributor is a man, born in 1933 in Newcastle upon Tyne, who grew up in Ashington, Northumberland, and lived in Consett, County Durham at the time he made the recording. As he chews the cud [= ‘ponders’] over how to define his phrase, he moves from non-standard dialect to botanical Latin. Either side of oatcakes and poison are two less familiar words: the English Dialect Dictionary records whumlick as another name for hemlock, a highly poisonous plant of the parsley family. Umbelliferae, from the Latin umbella [= ‘parasol’] plus -fer [= ‘bearing’], are plants that bear umbels [= ‘flower clusters’], in which stalks of a similar length spring from a common centre – such as cow parsley. In some ways, his recording could itself be described as umbelliferous!

Finite definitions that emerge when the cows (or the cow parsley) come home are some of my favourite contributions to the WordBank collection. It is through listening to these that we can revel in the irreducible inventiveness of spoken communication. What about ewe? Are there idioms of the never-never that you find moove further and further away as you follow? Either way, we hope that you have enjoyed this deliberately labyrinthine set of recordings!

Posted by Jonnie Robinson at 2:53 PM