There’s no mistaking it; the festive season is well and truly upon us. Christmas trees, laden with baubles and twinkling lights, can be seen popping up in windows all over the country and it won’t be long before we start coming home to find Christmas cards lying on the doormat. Chances are that at least one of these messages from loved ones will have a robin gracing the front cover.

One of the strongest associations between robins and Christmas cards can be traced back to the days of the Victorian postie. For a time,  Royal Mail postmen wore bright red uniforms which soon earned them the nickname 'robins'. As the exchange of Christmas cards grew in popularity, depictions of robins holding cards in their beaks began to appear. A trend was born and, over a century later, robins are still one of the most favoured images on the market. 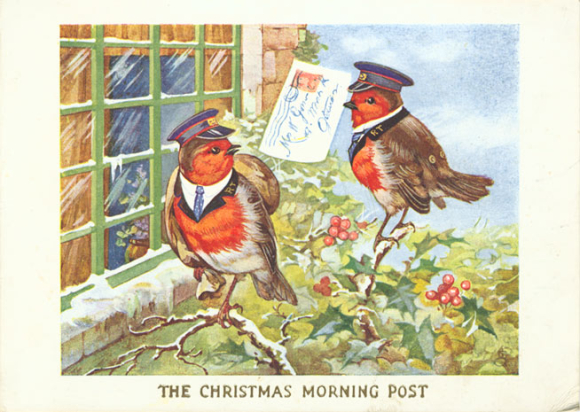 As well as adorning our mantelpieces, the robin is also responsible for the snatches of birdsong that can be heard in our parks and gardens at this time of year. Unlike most other songbirds who fall silent after the breeding season has come to an end, the robin continues to make himself heard. His song does change depending on the season; the winter song definitely has a frostier feel than the sweeter tune we hear in the spring. This may have something to do with the changing function of the song. In the spring months, the male robin has love on his mind. He is looking for a mate and, though he still needs to defend his territory against potential rivals, his song has a smoother quality. When winter strikes however, romance goes out of the window. It's all about survival, which leaves no room for any sweet talk.

The following recording is an example of the robin's winter song, recorded in the Forest of Dean, Gloucestershire by Nigel Tucker. Don't be fooled by the charming melody though - if you were a robin he would try to take you down in a second.