Recording of the week: a lesson in bird song duets and trios

With hundreds of recordings of birds from around East Africa, Myles E. W. North is a name that constantly crops up within the enormous collection of wildlife species reels here at the library. During his time with the Colonial Administrative Service in Kenya, Myles developed a keen interest in ornithology and, combined with his interest in music, this turned into a passion for recording and studying bird song. He had an excellent ear and was able to transcribe and mimic bird song very accurately. He released two highly praised records: ‘Voices of African Birds’ and ‘More Voices of African Birds’.

In this recording of Tropical Boubous - one of many outtakes from his commercial releases - Myles presents a selection of duets from the birds with announcements in between explaining how the duet works. He accurately whistles the part of each bird, and even uses a recorder (an end blown flute, not his EMI reel-to-reel machine) to demonstrate the lower notes that he cannot whistle. 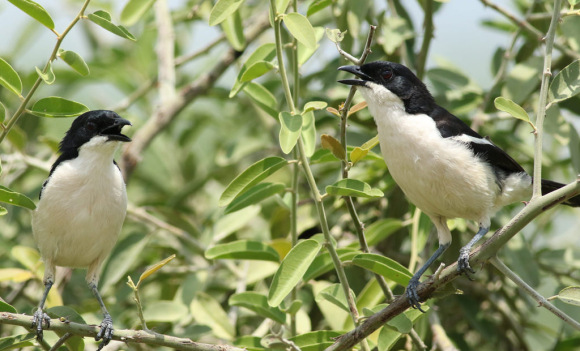 This excerpt features what Myles believes is a trio of boubous all adding their own part to the melody and, without his input, you would be forgiven for believing it was all one bird. Myles’ personality really shines through in this recording, demonstrating his knowledge and experience as he breaks down a complicated ensemble of birdsong with some brilliant mimicry.

Africa, Recording of the week, Save our Sounds, Sound and vision, Wildlife sounds