Recording of the week: Cello or drum? Meet the ütőgardon

Husband and wife Mihaly and Gizella Halmagyi were a duo of professional musicians from Gyimes Valley, in the Romanian stretch of the Eastern Carpathians. Their home town Gyimesközéplok is part of a significant Hungarian-speaking enclave in Romania, and the couple mostly performed old Hungarian folk music at weddings and other social events in their area. Mihaly played a modified fiddle with a fifth string added for extra resonance. Gizella sang and played the ütőgardon, a peculiar instrument that is unique to this area of Europe. 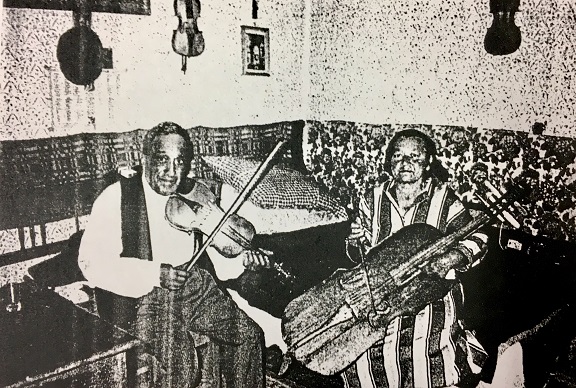 Mihaly and Gizella Halmagyi photographed in their home at the time of recording in 1996. Photocopy of photo by Susanne Kratzer.

At first glance, the ütőgardon (or gardon, as it is more informally called) looks like a slightly misshapen cello. It has four strings, a fretless neck, and even the f-shaped holes typical of the violin family. But this is where the similarities end. The tuning pegs are way too big, the bridge is flat rather than curved, and the four (sometimes three) strings are all tuned to the same note, usually a D, with the fourth and thinnest string tuned an octave higher than the rest. Lastly, but most importantly, there is no bow. Instead, a wooden stick is used to rhythmically hit the strings, a technique more reminiscent of drumming than bowing a cello, while the highest string of the instrument is plucked by the hand not holding the stick. Almost exclusively played as accompaniment to a violin, we could then say that the ütőgardon plays the function of a drum, albeit a drum that looks like a cello and produces a pitched drone.

The photocopied picture above is the only image of the couple held in our archive, and in it you can see Gizella in playing position: stick in the right hand and left hand plucking the fourth string up on the instrument’s neck. According to Gizella, her gardon was about 250 years old.

You can hear Gizella Halmagyi’s ütőgardon in the following recording, made by Susanne Kratzer at Gizella and Mihaly’s place on 20 June 1996. They perform a Csárdás, a Hungarian dance tune that they would normally play at weddings after the groom's party had reached the house of the bride.

This recording belongs to the Susanne Kratzer collection, which has been digitised as part of the British Library's Unlocking our Sound Heritage project. Shelfmark: C778/13.

Recording of the week, Sound and vision, World & traditional music