Sunday 12th May sees the 199th birthday of Florence Nightingale. To celebrate, Mike Esbester and Natalie Pithers share their experiences of exploring history with children, with particular reference to Florence's story.

How do children find out about the past? A challenging but crucial question for school teachers, the British Library, historians, genealogists and indeed anyone with a feel for history. Particularly for younger children, the nuances of historians’ interpretations and different theoretical approaches are difficult, if not impossible, to grasp. Instead, we make history more tangible by looking at the people and events of the past: from the everyday woman or man in the street, to ‘great lives’ and exceptional moments.

In some schools at the moment, children in Year One are looking at Mary Seacole, Edith Cavell and Florence Nightingale. A chance comment from the British Library’s Oral History Curator, Mary Stewart, alerted professional genealogist Natalie Pithers and academic historian Mike Esbester to the British Library’s sound recording of Florence Nightingale – and offered a great opportunity to make use of this and other sources with some Year One children in different settings. 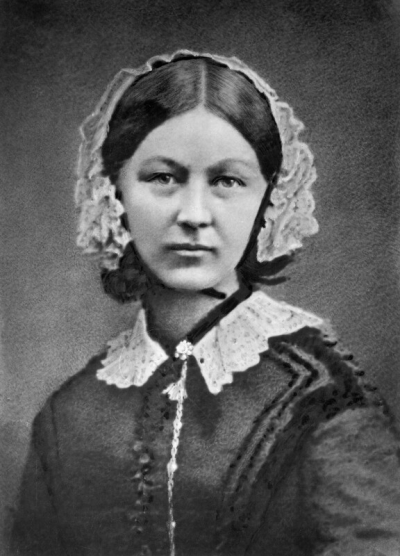 Last term, the ‘Florence Nightingale and Bravery’ topic captivated my bubbly 5-year old. She’d been enthusiastic about Florence since the first day of term, when she walked home from school eagerly recounting how the class had been given an ancient battered suitcase. The case was full of medicine and bandages, but best of all it contained ‘a dead rat’ and ‘Miss had no idea how it got there!’ It’s not hard to imagine the joy I felt at hearing my own passion for history echoed back at me by my daughter.

As a genealogist I wanted to share some of my professional life with my daughter, and this topic was ideal. We snuggled on the sofa surrounded by paper printouts, starting with Florence’s Christening record. My daughter saw the writing: ‘it was really bad in the olden days, wasn’t it Mum?’ She was captivated by the idea that this person ‘in history’ had parents, and a Nanny and Grandad – just like her.

We checked other records – the censuses. With a magnifying glass to ‘look for clues’, we cross-referenced across sources to find out when Florence was born and the names of her parents. What about Florence’s place of birth? She shouted excitedly, ‘It’s Italy!’

Next, newspaper reports on Florence’s death. My daughter bounced on the sofa as we ‘discovered’ poems and romanticised illustrations of the ‘lady of the lamp.’ For comparison we looked for articles on Mary Seacole’s death. There were no pictures and reports were scant. My daughter nodded knowingly: ‘it’s because she was poor.’ I let her draw her own conclusions.

Lastly, we found Florence’s voice at the British Library Oral History. Ears angled at the laptop speakers, we listened to the crackly tones of someone who died over 100 years ago, bringing alive in a different way someone so far only experienced on paper. I might just have good old Florence to thank, not only for so much of modern nursing, but for my child’s budding love for history. 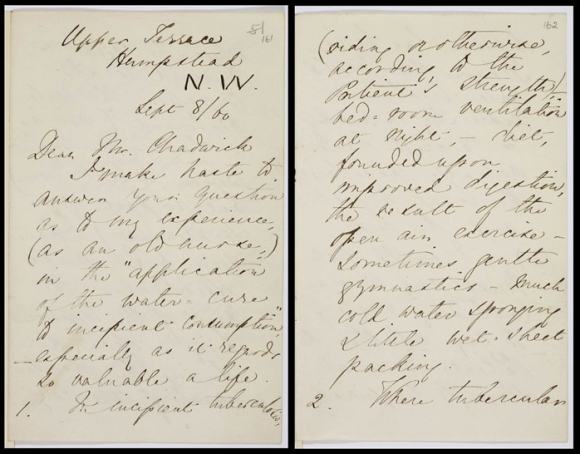 Example of a letter from the British Library collections: Letter from Florence Nightingale to Edwin Chadwick (Shelfmark: MS 45814)

Once I’d found out about the Florence Nightingale recording, I wanted to use it in a session I’d volunteered to give at Botley Primary School in Oxford. I hoped it would surprise the Year One children to hear the voice of one of the long-dead women they were finding out about that term, as well as produce a greater connection with the past.

We started by discussing what sources we might use to find out about the past, including looking at paintings and photographs of the Crimean War and thinking about what they might tell us. We had a look at one of Florence Nightingale’s letters, available from the British Library: it gave a personal insight into the conditions, as well as reassuring the children that grown-up ‘scribbly’ handwriting was nothing new! Importantly, we used it to question the idea that Nightingale was unproblematically virtuous – the children loved the rudeness of her comments about ‘drunken old dames’.

They were really keen to hear Nightingale’s voice – and whilst it was difficult to make out (unsurprising, giving the recording technology of the 1890s), they were excited. We talked about why the recording was made and the need to support war veterans before the modern welfare state.

I also took in a family possession – an 1855 jug sold to raise money for the Royal Patriotic Fund, a charity established in 1854 to support soldiers’ dependents. That the children could see something in front of them from the same time as Nightingale helped make that connection and they responded very strongly to the jug and the images it showed.

I was impressed with the projects the children had already been putting together, and the keenness with which they greeted the items we explored – their teachers have been doing great work with this generation of future historians! 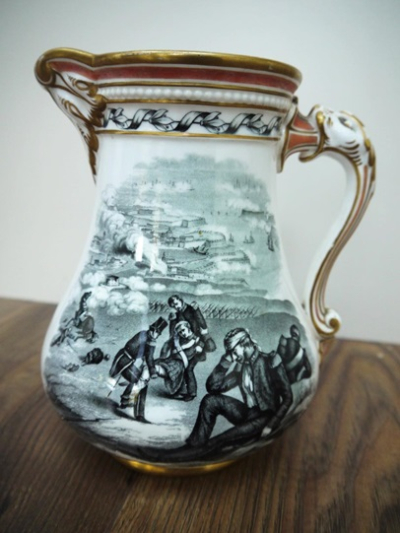 An item owned by Mike's family: 1855 jug sold to raise money for the Royal Patriotic Fund

This curriculum topic was a great opportunity to introduce children not only to particular episodes in the past but also the method and process of historical research. At home and school we were able to think about the figures that are popularly remembered from the past, the ‘great lives’, and those who haven’t been remembered – those ‘old dames’ Nightingale bemoaned as well as individual soldiers and others from all sides of the conflict. This level of abstraction wouldn’t work well with the children, so the primary sources allowed us to get to grips with the bigger questions – and for that, the British Library’s collections, oral history and manuscript, were a great help. It was also important that this wasn’t simply a discussion about the past, but opened up conversations about gender stereotypes and what women and men were and weren’t allowed to do – and how that has changed today.

Natalie Pithers is a professional genealogist, driven by a long-standing interest in her own family history and a desire to help others find out about their pasts. She offers her professional services as Genealogy Stories, helping people link family history with wider social contexts of the time; at the same time, her website is a means of sharing her own research and general tips to help people. She tweets as @geneastories.

Mike Esbester is Senior Lecturer in History at the University of Portsmouth. Taking history out of the University and into other settings, like schools, is an important and fun part of the History team’s work. The team tweet as @UoP_History and run an active blog. Mike researches and teaches on a variety of topics relating to 19th and 20th century Britain, including the history of accidents, safety and risk. He co-leads the collaborative ‘Railway Work, Life & Death’ project, looking at accidents to British and Irish railway workers from the later 19th century to 1939, and tweets as @RWLDproject.

Natalie, Mike and Mary Stewart are currently working together, with a number of others, on an initiative to bring together historical researchers – archivists, academics, local historians, family historians, genealogists and more – to share expertise and to promote better cooperation. The Oral History Society is supporting this initiative. This collaborative effort is going under the banner ‘Historians Collaborate’ – for those on Twitter, look for (and please use!) #HistoriansCollaborate.

Posted by Camille Johnston at 3:24 PM