In 19th century coastal folklore, the harsh and unforgiving nature of the sea was often personified by the cruel sea witch Mother Carey.

Carey was said to wreak havoc on the ocean waves, conjuring up devastating storms that would destroy any vessel unlucky enough to be caught in her sights. The ship’s crew would be sent to their deaths so that Carey and her partner, Davy Jones, could feast upon their rotting bodies.

She’s the mother o’ the wrecks, ‘n’ the mother
Of all big winds as blows;
She’s up to some deviltry or other
When it storms, or sleets or snows;
The noise of the wind’s her screamin’
‘I’m arter a plump, young, fine,
Brass-buttoned, beefy-ribbed yound seam’n
So as me ‘n’ my mate kin dine.’

Mother Carey didn’t travel the open ocean alone though. Like any villain worth their salt, Carey was accompanied by her very own entourage, which, in this case, happened to be a flock of Storm Petrels (Hydrobates pelagicus). Dubbed Mother Carey's Chickens, these little seabirds were thought to signal the imminent arrival of the dreaded sea witch. 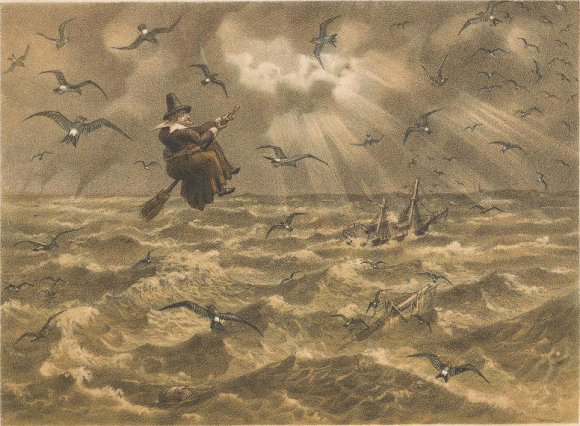 As far as accuracy goes, Storm Petrels are a pretty good choice. Not because there's anything sinister about them, but because they're most at home on the open sea and can easily cope with the severest of weather conditions. While many other birds would be caught short in the middle of a tempest, Storm Petrels just take it all in their stride.

What you wouldn’t hear was their voice. For Storm Petrels are generally silent at sea (not a great trait for heralds of doom, but there you go). The complete opposite can be found at their breeding colonies however. Here individuals engage in sustained vocal activity, producing far-carrying purring calls from their burrows. The following extract, taken from a longer recording made by Alan Burbidge on Skokholm Island in 1998, is a great example of this.

Harbingers of death should, at least in my mind, be loud. Very loud. Terrifying too. But our Storm Petrels are anything but that. Rather selfishly, they save their spine-chilling voices for when they're off duty. So if I was Mother Carey, I'd feel a little short-changed.