One of the very first MEPs: Joyce Quin, Baroness Quin, remembers the early days of the European Parliament 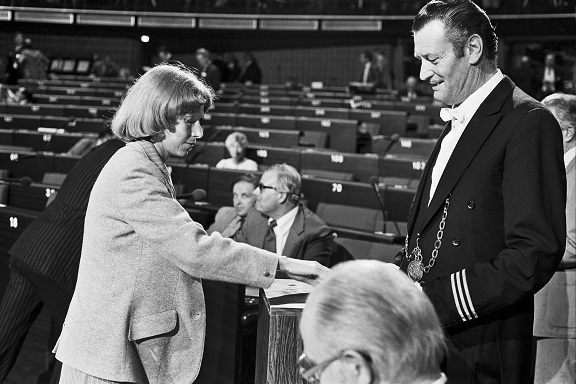 Today, despite the Government’s best intentions, Britons vote again in the European elections, nearly 40 years since the first cohort of MEPs was elected in June 1979.

Joyce Quin, now a member of the House of Lords and former MP for Gateshead (1987-97), was one of the 410 MEPs elected in 1979. She served as an MEP for ten years, and in her 2014 interview for the History of Parliament oral history project, she describes how she came to be selected as a Labour MEP candidate.

“Well, that was a very chancy thing in a way. About the time of the European elections, because I was lecturing on European policy and I was a member of the Labour Party, and also through my mother I still had links with where I grew up near Tynemouth in Witley Bay, I got asked to speak to a newly formed Fabian Society, the North Tyneside Fabian Society, about the European elections which I did and we had a nice meeting.

Then a couple of weeks later the secretary rang me up and said they had realised that they could nominate someone on the selection process for their local [European] constituency, because it was a constituency system in those days, which was called Tyne South and Wear.

And she said that the members would like to nominate me and I thought about it, and even though I was thinking that I would probably stay in the academic world, obviously it was a very interesting offer and I thought I’d really be interested in doing that, so I said yes while realising it was the first rung on an extremely long ladder.” [C1503/61 Track 1, 00:11:32 - 00:12:52]

Quin goes on to explain the backdrop to her selection process, aspects of which are as true today as they were 40 years ago.

Once elected, Quin was part of a new project in which fellow MEPs “were thrilled to be creating something so different and democratic and hopeful.” In this clip, she describes the idealism that permeated the atmosphere during the early days of the new institution.

For the candidates of 2019, the atmosphere that awaits those that are elected as MEPs could not be more different.

You can listen to the complete interview with Joyce Quin at British Library Sounds.

Posted by Charlie Morgan at 5:28 PM