Recording of the week: Loss of a world and a need to capture it

'Someone asked Goha what was his favourite music and he replied, "The clanging of pots and pans and the tinkling of glasses’"'(Middle Eastern Food, p.520)

In 2018 Gaby’s Deli closed after 50 years on Charing Cross Road. A popular haunt of both theatre goers and Central London protestors, it’s also where the proprietor Gaby Elyahou claims (although who can really prove such a thing) to have introduced falafel to London. Gaby’s opened in 1965 and three years later, cookbook writer and cultural anthropologist Claudia Roden published her first masterpiece A Book of Middle Eastern Food, updated two years later with A New Book of Middle Eastern Food. While Gaby’s was pretty successful in selling falafel, Roden is the first to admit that Middle Eastern cuisine in general did not go down too well in the UK. In the clip selected for this blog she remarks on how “in those days I wasn’t thinking of the English, because at that time the English were not interested at all” and how the general consensus was it might all be “eyeballs and testicles”. Obviously things are different today, but this does raise the question of who Roden was writing for instead. 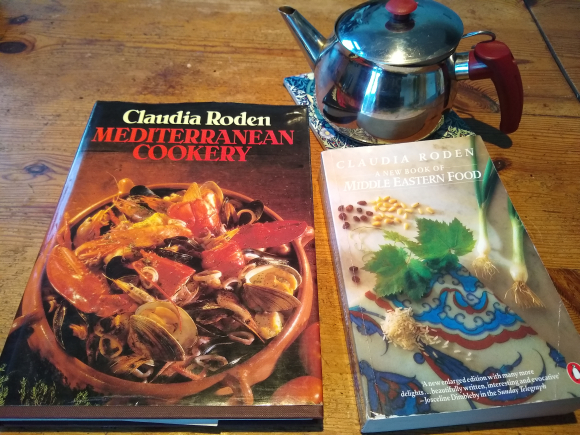 My mum's copy of Mediterranean Cookery, my housemate's copy of A New Book of Middle Eastern Food and a teapot.

Claudia Roden was born in 1936 to a Jewish Egyptian family. In 1951 she left Cairo for France and then the UK to study art, but after the Suez Crisis of 1956 her family, like many other Egyptian Jews who were expelled or fled, joined her to settle in London. It’s there that Roden began, as a form of historical preservation, to collect recipes, and in this recording she gives her poignant reasons for doing so; “loss of a world, loss of a heritage and a need to capture it”.

Roden began with “ourselves, my family” and moved on to “others who had come from Syria, or had come from Turkey”, eventually culminating in A New Book which is described in the introduction as a “joint creation of numerous Middle Easterners who, like me, are in exile”. But wherever the recipes came from and whatever stories they told, Roden was adamant that they “have to be written down, have to be made a record of”. With that in mind it’s apt that we come full circle to this Recording of the Week, itself, taken from an eleven hour oral history interview recorded by Polly Russell for the National Life Stories project ‘Food: From Source to Salespoint’. Because if books are one way of preserving history then recordings are another, and both are underpinned by the same principles of heritage. Interviews too are a “joint creation” and, in the domain of oral history, “loss of a world, loss of a heritage and a need to capture it” remains central.