The Stonewall Riots: I wouldn’t have missed it for the world 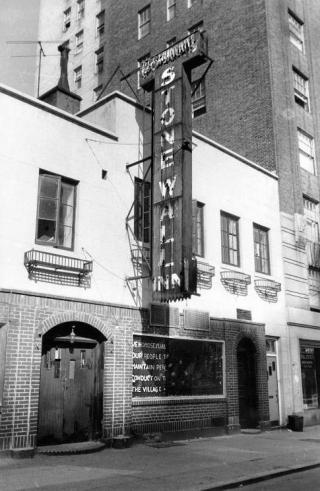 In the United States, actions to protest against discrimination of gay men and lesbians began in the 1950s. A decade later times were ripe for what would become known as the starting point of the gay revolution: the Stonewall Riots. Starting at 1am on a Friday night, 28th June 1969, the riots lasted for six days. Six days where gay men, lesbians, drags queens and transgender people confronted the police to protect and claim their spaces, dignity and rights. The turmoil led to the formation of the intersectional Gay Liberation Front in early July and, later in December, of the Gay Activists Alliance which was more strictly focussed on LGBT issues.

The mythology that has developed around the event is not only due to the fact that it, unbeknownst to those who raised their voice that night, made history, but also because of supposedly conflicting accounts of the night. However, David Carter (author of the book ‘Stonewall, the riots that sparked the gay revolution’), shows that when put under close scrutiny, narratives of the night don’t conflict at all and unreliable information can be easily isolated. It was a collective effort in which the whole LGBT community played their role.

Leee Black Childers, a photographer who worked closely with artists pivoting around Andy Warhol’s Factory, is one of the people who witnessed the uproar from outside the Stonewall Inn. He was 24 at the time, and had moved to New York from San Francisco a few years earlier. Looking for alternative lifestyles he found Greenwich Village, an astounding and fascinating mixture of urban realities, from residential houses and deli shops, to the Women’s House of Detention, past the gay scene of the Stonewall Inn in Christopher Street. He recalls a buzzing atmosphere, brightened by mostly gay male youth and statuesque figures running in their stockings up and down late at night. It was around these streets that his passion for photographing drag queens began, thanks to a fortuitous invitation to the wedding of The Factory’s stars Jackie Curtis and Eric Emerson. This was an environment he felt he belonged to; frequented by talented and of control people such as Andrea Whips and Holly Woodlawn, as well as a crossroad of artists who shuttled between Warhol’s Factory in Union Square and Mickey Ruskin’s Max’s Kansas City (originally a steakhouse, with a backroom just dedicated to the craziest people from all avenues of life).

The Stonewall Inn wasn’t the only gay bar in the neighborhood. The Snake Pit, the Checkerboard, and the Sewer were all well-established venues, and had all been raided and shut down in the weeks preceding the riots.

In his interview, Leee Black Childers describes one of the police attacks at the Sewer, an after hour bar, where drag queens were lined up and arrested. He explains how the detention of crossdressers was legally possible due to a law that prohibited masquerading in public. Yet in most of these occasions, although harassed by the police, gay people would be let away unless caught in explicitly homosexual activities.

A few days after, Leee was sitting on the stoops of Christopher Street with some friends, when someone in clacking slingbacks came down the street screaming ‘They're raiding the Stonewall!’ and...

Blog by Lucia Cavorsi, Audio Project Cataloguer for Unlocking our Sound Heritage. The complete interview with Leee Black Childers can be listened to onsite at the British Library in St Pancras or Boston Spa. For more information on an Oral History of British Photography see the collection guide to Oral histories of visual arts and crafts.

Posted by Charlie Morgan at 5:11 PM