Alan Turing on the £50 note 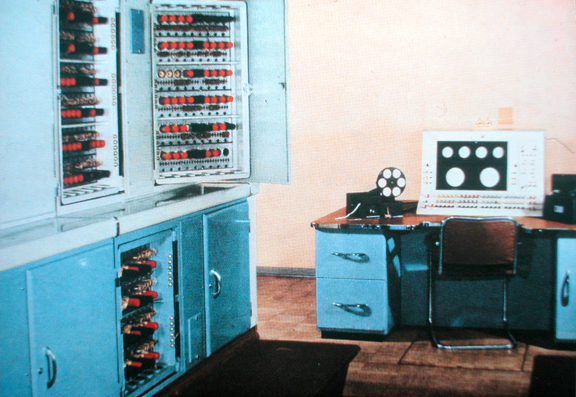 One of the computers used by Alan Turing during his time at Manchester. Courtesy of Ferranti/Computer Conservation Society.

This week mathematician Alan Turing was announced as the new face of the £50 bank note. Turing’s impact on the modern world is astonishing: In the 1930s his mathematical theories about an abstract “universal machine” presaged the general purpose computer; he played a key role in ultra secret wartime code breaking at Bletchley Park, contributing to work that probably saved millions of lives. In the postwar years he designed one of the earliest modern computers, the Automatic Computing Engine, and pondered if machines could think, helping to lay the foundations for the study of artificial intelligence. At the University of Manchester he was one of the earliest users of the pioneering Manchester Baby, the world’s first modern computer. A gay man at a time when such relations were illegal, he was prosecuted for homosexual acts in 1952, and died at his own hand in 1954 after consuming a cyanide laced apple. His eventual pardon in 2013 after a popular campaign was followed by ‘Turing’s Law’ in 2017, which granted a pardon to tens of thousands of gay and bisexual men previously convicted under laws that have now been repealed.

Several of those who worked with Turing in his time at Manchester were interviewed for An Oral History of British Science, recording unique personal reflections on a man who was far less well known at the time. For example, electronics engineer Geoff Tootill was one of the team who build the Manchester Baby, and found himself in the unique position of debugging Turing’s first computer program:

Research student Dai Edwards, was another who helped Turing use the Manchester computer:

Mathematical prodigy, heroic wartime codebreaker, tragic LGBT icon, a father of computing, now the subject of a Hollywood film; as time passes it gets increasingly difficult to separate the man from the legend, which makes the memories of those who knew him invaluable for helping to understand the real Alan Turing.