Two years into an ambitious, nationwide project, the Unlocking Our Sound Heritage team recently celebrated reaching the milestone of 100,000 digitised sound recordings. Supported by funding from the National Lottery Heritage Fund, Unlocking Our Sound Heritage is a major British Library project focused on identifying, cataloguing and digitally preserving half a million of the nation’s most rare and at-risk sounds.

After establishing a network of ten audio preservation centres across the UK, project staff at the Library and its partner institutions have been digitising thousands of sound items, before they physically degrade or the means for playing them disappear from production. The UK-wide project aims to provide public access to these sounds, through outreach events and a new sounds website launching next year.

Digitising 100,000 items is a fantastic achievement and goes some way to realising the project’s goal of safeguarding the nation’s audio heritage for future generations. As a celebration of the hard work that has gone in to the project so far and the rare sounds discovered along the way, we are sharing a unique recording to mark reaching 100,000 digitised recordings.

This noteworthy recording captures the remarkable hammer and anvil music of the Yoruba blacksmiths of Nigeria. I say ‘played’; ‘spoken’ might be a more fitting word, as the tonality of the hammer and anvil instruments actually resembles patterns of Yoruba speech. Held in the C1074 Peggy Harper Africa Collection, this intriguing recording demonstrates how these unusual instruments are used not only make music, but to speak expressive sentences in the Yoruba language. 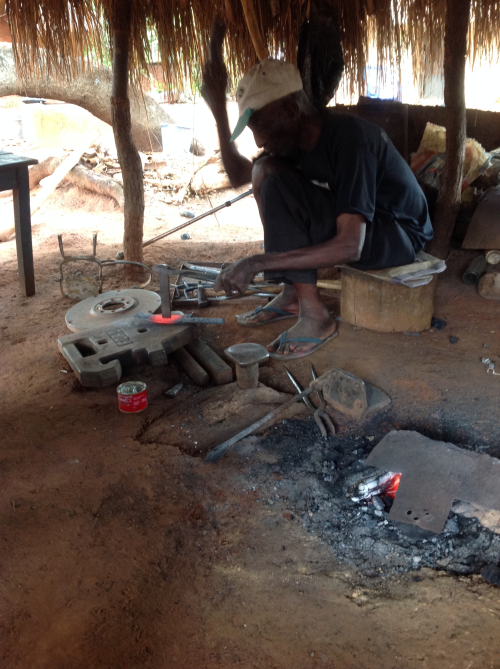 Catherine Smith, World and Traditional Music Volunteer for Unlocking Our Sound Heritage, has been working closely with the Africa Collection, classifying musical instruments featured in several of the recordings using the Hornbostel–Sachs classification system.

Volunteering with the project has introduced her to a fascinating collection of Nigerian ensembles and traditional music, including music performed with drum and percussive instruments. Catherine was intrigued to discover several unusual objects used to play music while listening to the collection, including the hammers and anvils that she classified as ‘Idiophones – Metal’.

After sharing the recording with the Unlocking Our Sound Heritage Team during one of their regular listening sessions, Catherine described what she found fascinating about the music: ‘I enjoyed this use of practical tools to communicate the Yoruba language though music and the way in which it develops into expressive tonal and rhythmic patterns’.

On Uncommon Instrument Awareness Day, a day on which we are encouraged to broaden our ideas of what instruments are, listen to an extract of Peggy Harper’s recording of this fascinating hammer and anvil music and read Catherine’s commentary below:

This is an extract of Peggy Harper’s recording of the anvil and hammer music of the Yoruba blacksmiths in Nigeria. Here the players are giving a demonstration of how the hammer and anvil can 'speak' sentences in Yoruba language. The music is named after ‘Ogun’, ‘the God of Iron’. A man introduces the music with this explanation:

Posted by Adonis Leboho at 2:48 PM

Save our Sounds, World & traditional music