Partition memories and the power of oral testimony

BBC journalist and author Kavita Puri reflects on the power of oral testimony. Hear more from Kavita at the British Library on Tuesday 16 July at 7pm, where she will discuss Partition Voices in conversation with Kirsty Wark. Book here: https://www.bl.uk/events/partition-voices.

In the summer of 2017 I ran a BBC project called Partition Voices. It marked the 70th anniversary of the division of British India into the independent states of Hindu-majority India and Muslim-majority Pakistan. I collected testimonies of colonial British and British South Asians who had lived through that tumultuous time. Their eye-witness accounts document the end of empire. They also tell of living through partition – where over ten million people were fleeing: Hindus and Sikhs to India, Muslims to Pakistan. It was accompanied by terrible violence where people of the “other” religion were targeted. Many thousands whose lives were disrupted by partition migrated to post-war Britain. They brought their stories of grief, loss and trauma with them, but kept silent about it for many decades. I also interviewed children and grandchildren of the partition survivors about its continuing legacy in Britain. I have now published a book arising from the interviews. 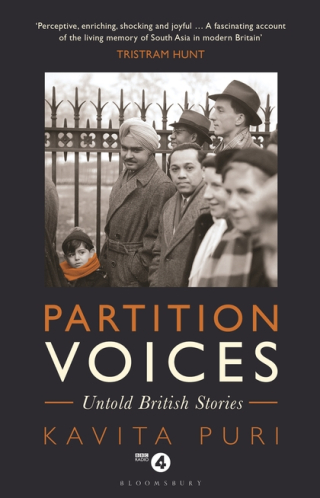 Central to the project was having a place to keep these testimonies, so future generations could access them, for interest or scholarly work, and I am delighted that 32 of the interviews are now archived in the British Library Sound Archive. Why did this matter? Partition memories in Britain were only just emerging with the 70th anniversary. When the migrants came over to post-war Britain, people were getting on with their lives here, fighting to be accepted and there was little time to talk of the past. There was also an institutional silence pervading empire and its demise, no one spoke of it, so there was no public space to discuss it. And so many partition memories are bound up in honour and shame – it became difficult to speak of. Many from that generation are elderly, and as they finally open up, it has become a race against time to record their stories for posterity.

These accounts – the lived experience – are important. These voices are harder to find in the official documentary evidence kept in the British Library India Office Records that speaks more loudly of the “high politics” of partition. Crucially, the interviews paint a complex picture from that time. Of course they speak of the horrors, but they also talk of how closely the Hindu, Sikh and Muslim communities were in pre-partition British India. How people would share in each other’s festivals, happiness and sorrows. There were deep friendships across religions. The place that people left may have been land that generations of their family members had lived on. Even though people may not have returned in seventy years there is still a visceral pull to their place of birth. It’s a place they still say they feel they belong to. The precise details of the testimonies reveal so much. The musings out loud, of what happened to a childhood friend; the longing to go back to visit a mother’s grave; the wish to have your ashes scattered where you were born.

These stories are significant because they show another side of history. And for second and third generation British South Asians it paints a nuanced picture of that time, and helps inform their identity today. The South Asian community in Britain can be fractured, and what these accounts reveal is how much they shared and had in common. These testimonies of former subjects of the British Raj who are now British citizens are British history. It is a part of history that is still difficult to talk of, and is not yet taught in schools. Yet it is vital to understand why contemporary Britain looks the way it does today. There will be a time, I hope, where the history of empire and its end is taught widely and these accounts will be a valuable resource.

There is something wonderful in knowing these original interviews on which my book Partition Voices is based upon will live in the British Library, and that when I am an old lady, around the age of the people I interviewed, they will still exist there, and for many generations to come.

The Partition Voices collection (reference C1790) sits alongside many existing oral history collections which contain powerful testimonies of migration and the impact of the colonial British past. The Partition Voices radio series is available from BBC Sounds and won the Royal Historical Society Public History Prize 2018, which you can read about on the Sound and Vision blog. Partition Voices: Untold British Stories is published by Bloomsbury on 11 July, 2019.

Posted by Camille Johnston at 10:35 AM