The nightingale sings again - the life, career, and recordings of Beatrice Harrison 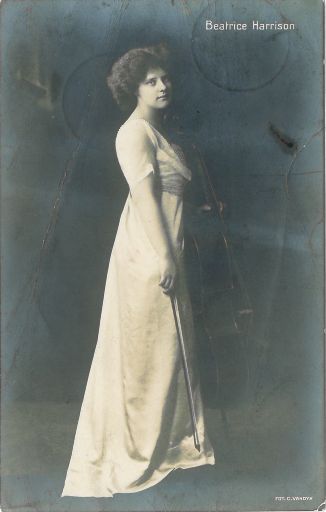 Suddenly, the door opened and the King came in. He was quite alone. He came up to me… saying, 'Nightingale, nightingale,' he said, 'you have done what I have not yet been able to do. You have encircled the empire with the song of the nightingale with your cello.'

These are the words spoken by the cello virtuoso Beatrice Harrison (1892-1965) in 1955 for the BBC Home Service programme Scrapbook for 1924. Harrison, who was once a household name at the height of Great Britain’s colonial empire, lent her first-hand account to help create an historical snapshot of 1924. The monarch she is referencing is King George V. This interview is just one of the rare resources found in the Sound and Moving Image collection at the British Library. My Edison Fellowship facilitated travel to London to access this and many more primary sources for my dissertation exploring the career, life, and recordings of this outstanding early 20th century performer.

Beatrice Harrison’s development was meteoric. She was second of four prodigiously talented sisters: May, Beatrice, Margaret, and Monica. Their early musical studies were supervised by their firebrand of a mother, Annie Harrison. Annie was a talented amateur singer and pianist, and perhaps because she was not able to pursue a musical career herself, mobilized all of her family’s resources to the careers of her children as professional musicians. One of the most fascinating windows into the Harrison family’s lives are their practice journals. The girls were expected to keep meticulous records to document every hour of every day’s productivity. Annie’s devotion and tenacity paid off. Beatrice received exceptional training at the Royal College of Music, the Frankfurt Hoch Conservatory, and the Hochschule für Musik in Berlin. While studying with the famous German cello pedagogue Hugo Becker (1863-1941), she won the Mendelssohn Prize at age seventeen.

In their early 20s, Beatrice and her elder sister May Harrison toured Europe and Russia performing the Brahms Concerto for Violin and Cello some fifty-nine times. During their travels, they met Gabriel Fauré, Sergei Rachmaninov, Alexander Glazunov, Gustav Holst, and David Popper. The Harrison sisters also brushed shoulders with the world’s political elite including European royalty, Franklin and Eleanor Roosevelt, and in England, King George V and his sister Princess Victoria. 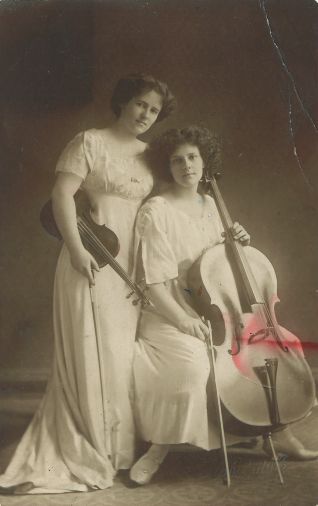 Beatrice and May Harrison (BL Collections)

Beatrice became close friends with Princess Victoria, so close, that it was Princess Victoria who paid for Harrison’s beloved cello, the great ‘Pietro Guarnieri’.  In August 1928 HMV made some private recordings for the Princess.  Here is one of the third movement of Elgar’s Cello Concerto in E Minor featuring Beatrice on the cello and Princess Victoria accompanying her on the piano.

Another recording, which can be heard at the British Library, is an interview conducted in 1986 with Margaret Harrison (1899-1995), Beatrice’s younger sister. Margaret herself was a prodigy as the youngest pupil of the Royal College of Music (age 4) and her piano skills were extensive enough that she toured with Beatrice in the United States (they even made it to Texas). Here, we can listen to Margaret create a portal, not only into the life of the Harrison family, but also into the private life of Princess Victoria.

Harrison’s greatest claims to fame straddle two different sides of the music world during the 1920s. Today, Harrison’s legacy endures for her recordings of the Elgar Cello Concerto recorded under the baton of Sir Edward Elgar himself. She was his preferred cellist for the concerto and he credited her for popularizing it after its disastrous premiere.  They first recorded it together in 1919 and 1920 by the old acoustic process. 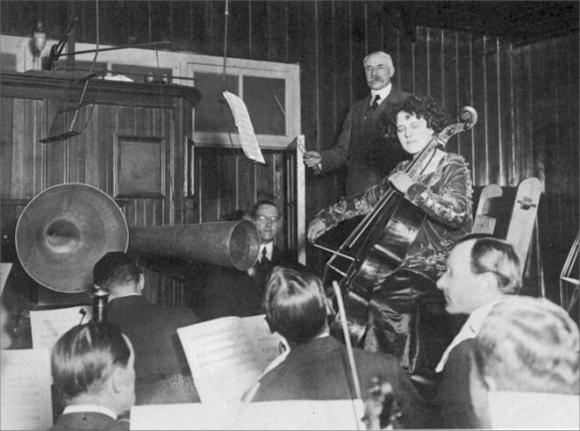 Elgar and Beatrice Harrison recording for HMV in 1920

A new recording was made by the electric process on 23rd March 1928 where two turntables were recording simultaneously.  Using modern digital technology, these two recordings made at the same session have been combined to create a new stereo version.  It also stands as the most accurate representation of what Elgar intended his famous concerto to express.

The second contribution Harrison made was as an international radio superstar.  In 1924, she had a 'hard tussle' (her words) to convince managing director of the BBC Sir John Reith to have sound engineers go to her garden near Oxted in Surrey.  Her vision was to recreate on live radio what she had successfully accomplished herself many times: marry the rich sound of her cello with the song of the nightingale.  In the dark, positioned under an oak tree, surrounded by rabbits, microphones, and wires, Harrison performed Rimsky-Korsakov’s Chant Hindu accompanied by the sound of nightingales to a radio audience of a million people.  Four years later she recreated this for the HMV microphone. 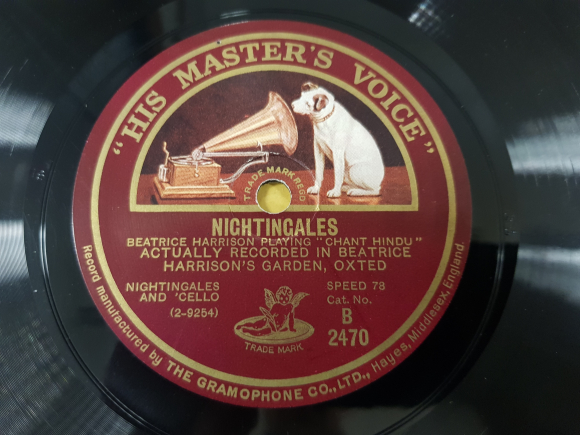 Meanwhile, the live broadcast was a hit. It was the first time the BBC had broadcast the sound of birds in their natural habitat. Harrison received more than fifty thousand fan letters and welcomed hundreds of visitors to her estate from every corner of the British Empire. They all hoped to meet ‘The Lady of the Nightingales.’ Harrison and the BBC recreated their broadcast every springtime for twelve consecutive years and later, in the 1955 Scrapbook programme mentioned above.  Here is an excerpt from that broadcast describing what happened in 1924 and ending with her recollection of the King's comments mentioned above.

Harrison’s success even led to her appearing as herself in the 1943 British propaganda film The Demi-Paradise, and extraordinary scene where she plays in a garden with nightingales during an air raid for a radio broadcast.

Harrison embraced her status as an international British cultural icon and thus named her memoir The Cello and the Nightingales.

As an American, the Edison Fellowship was my ticket to accessing not only the British Library’s resources, but many institutions and individuals in London. The Harrison Sisters’ scores at the Royal College of Music and Harrison’s correspondence (contracts, internal memos, and letters) with the BBC at their archives in Caversham. Both the RCM and the BBC Archives were so very kind and helpful, especially the RCM librarians who made dozens of trips into the basement to pull up heavy boxes of music, I thank you for helping this helpless American.

While in London, I was privileged to meet the two leading Beatrice Harrison historians, David Candlin, Chairman of the Harrison Sisters Trust and Patricia Cleveland-Peck, author of many beloved children’s books and the annotator/editor of Beatrice’s autobiography, The Cello and the Nightingales. David was kind enough to invite me into his home and show me the Harrisons' church and graves and the Music House in Surrey. He also provided access to documents and countless photos I had never seen before.

Special thanks to Jonathan Summers at the British Library Sound Archive who manages the Edison Fellowships for help and guidance during my stay in London, and for accompanying me in Anton Rubinstein’s Cello Sonata and a Beatrice Harrison manuscript!  Finally, thanks to Cheryl Tipp, curator of Wildlife & Environmental Sounds, for the use of a recording studio to finish the transcriptions of the recorded interviews.

Thanks to Somm Recordings for permission to use the Elgar recordings

Posted by Jonathan Summers at 10:34 AM