Hazem Jamjoum joined the British Library Qatar Foundation Partnership Project in April 2019 as Gulf Audio Curator and Cataloguer. Over the next 2-3 years he will be working on the Library's audio collections connected with the Gulf region to scope, catalogue and research them, to manage their preservation and access and to write about them. In this blog Hazem talks of his introduction to the collections.

It was at the very beginning, less than three weeks into my role as Gulf History Audio Curator that I found myself with British Library Sound Archive doyen Ian Macaskill in the disc and tape-bestrewn room through which newly acquired sound and moving image materials enter the British Library’s collections. At the end of this audio-cataloguer rite of passage, one foot already out the door, I was beckoned back into the room to describe my role at the Library to another veteran of the accessioning team. As if awaiting confirmation that I would work with Arabic language materials, a bemused Jowan Collier rose from his seat and began the dance around the stacks of CDs to the other end of the room. “I imagine there’s a box that’s been sitting here that might just pique your interest.” A few dozen shellacs in an assortment of discrepant sleeves lay in a dark wooden box marked “532: Emile Cohen Collection.” A yellow sticky note, curled up like a delaminated lacquer disc on the side of the box announced October 25, 2016 as the donation date. 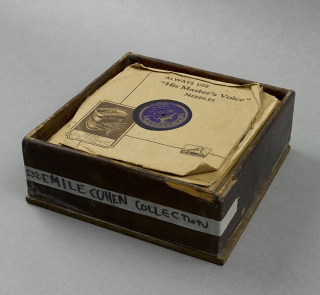 “…there’s a box that’s been sitting here that might just pique your interest.”

I eventually found out that it was my predecessor on the British Library-Qatar Foundation partnership, Rolf Killius, who had arranged for this gift. Rolf had delivered a lecture about Iraqi music at the British Institute for the Study of Iraq after which an elderly gentleman introduced himself, and soon thereafter offered to donate a collection of shellacs to the British Library. This was Emile Cohen. Born in Baghdad in 1943 to a secular scion of a rabbinical family, Emile spent the evenings of his youth listening to the dozens of guests who would assemble at his grandfather’s house for edifying conversation. Given the centrality of Baghdad’s Jewish community to the city’s musical life, much of this conversation centred on things musical. It didn’t hurt that from the roof of their house they could eavesdrop on the regular musical performances at the nightclub next door. Cohen had obtained the recordings from 'Ezra Hakkāk. The Hakkāk’s owned a shop on al-Rasheed Street in Baghdad and another in Tehran that started off selling leather goods, branching out into sewing machines, electronics and, ultimately gramophone machines and records.

Emile narrates much about these and other stories in an oral history interview conducted by Richard Green and held at the Library as part of the Sephardi Voices UK Collection (C1638), and which comprises oral history testimony about the settlement of Jews from West Asia and North Africa in the UK. 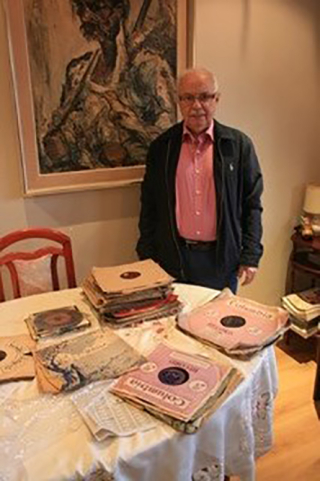 Emile Cohen just before a trip to the British Library to donate his shellac collection. Photo: Rolf Killius, 2016.

Much can be said about what was in that little box, but ‘beginnings’ might be ‘a very good place to start’ given how many of the recordings contained in that box of wonders embodied career-launching events in the contributing artists’ biographies. At the very top of the box’s stack of discs lay two Baidaphon records by the legendary Laylā Murād (1918-1995). Though Murād had achieved enough fame as a teenager in one of Cairo’s top music halls to be cast in one of the earliest full length Egyptian films (al-Dhaḥāyā [The Victims], 1932, dir. Bahija Hafez and Ibrahim Lama), hers was a minor role in the silent film. She achieved a bit more notoriety when that film was reissued as a ‘talkie’ a few years later, landing her a recording deal with Baidaphon that resulted in Ḥabbayt w shuft ktīr (I've loved and seen a great deal), which was also in the box. But it was not until her 1938 collaboration with Moḥammad ʻAbd al-Wahhāb on the film Yaḥyā al-Ḥubb (Long Live Love, dir. Moḥammad Karīm) that her career as a superstar singer and actor began. Indeed, the two records at the top of the delightful box were Yā mā ʼaraqq al-nasīm (oh how soft the breeze) and Yā qalbī mālak (oh my heart, what is the matter), both written by Aḥmad Rāmī and composed by ʻAbd al-Wahhāb, and both from that film’s soundtrack. 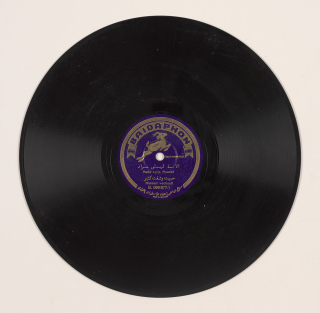 “Ḥabbayt w shuft ktīr” on the Baidaphon label. Recorded when she was 19 years of age, it was one of Layla Murad’s very first recordings.

Nestled among the shellacs in the box of wonders was a little 17cm disc in its original sleeve proclaiming the artist as “Om Kalsoum”, one of more than a dozen variations on the Egyptian diva’s name. The recording is “Enta fein wel ḥobb fein” which roughly translates as “love is here, and you are way over there”, a song much better known after its opening verse "ḥubb eh illi-inta gayy tʼūl 'aleh" (what love is it that you speak of). By 1960, when this song was first performed, Um Kulthūm was already well established as the pre-eminent Arab artist across the region. Indeed, at that time Egypt and Syria had united into the United Arab Republic, and Um Kulthūm had been chosen to sing the union’s national anthem. But it was the largely unknown composer of this runaway hit who skyrocketed to regional fame when it was first performed. Balīgh Ḥamdī (1931-1993) had studied music since the age of nine, spending his college years between law school and the music academy before trying his hand as a singer in the late 1950s. It was around this time that Um Kulthūm was looking for a new sound, meeting Ḥamdī at the recommendation of singer (and Misrphon label owner) Moḥamad Fawzī. In the two decades that followed the success of ḥubb eh, Ḥamdī became one of the most sought after composers in the Arab world, composing for every major artist of the mid-twentieth century as well as for radio, television, theatre and the cinema. Hip hop aficionados will be very familiar with Timbaland’s sampling of the melody from Ḥamdī’s Khusāra khusāra on Jay Z’s first major hit single, Big Pimpin’. Intellectual property enthusiasts are likely also familiar with it after Ḥamdī’s nephew sued Jay Z, Timbaland and EMI in 2007 for copyright infringement. The court summarily dismissed the case in 2015, finding that Egyptian law was not applicable, and that as a result the artists and the recording company were under no obligation to seek the permission of Ḥamdī’s family for what the family considered a debauched use of Balīgh Ḥamdī’s work. 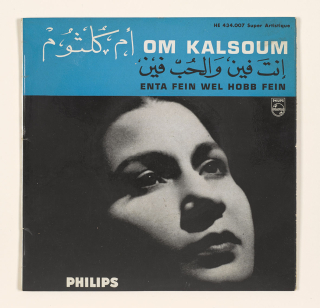 In addition to a host of other career-making recordings, Emile Cohen’s gift can tell the tale of another sort of beginning; the beginning of Egyptian music’s regional dominance in the interwar period. Many of those involved in the development of cultural production in Egypt since the nineteenth century were artists whose families had moved to Egypt from Greater Syria, a trend that continued well into the twentieth century. From this collection alone, some names that stand out include: Baidaphon was a Beirut-based record label, and possibly the first homegrown music recording company in the Arab world. This sleeve from the 1940s showcases the company’s top recording artists. It is notable that all of these artists hail from Greater Syria, and all of them launched their stardom and regional celebrity in Egypt. Clockwise from the top: Asmahān, Najāḥ Salām, Ḥalīm al-Rūmī, Sihām Rifqī, Moḥammad Salmān, Ḥanān. The record in the photograph is by an Egyptian dancer of Syrian origin, Bibā ʻIzz al-Dīn, who achieved far more notoriety for her live shows in Cairo’s music halls than she did for her recorded output.

Those familiar with postcolonial dynamics will be particularly aware of just how politicised cultural battles between former coloniser and colonised can be. In the case of Arab states emerging from British, French and Italian colonial rule, and in light of the centrality of Cairo described above, the battle over national culture was also waged with an eye to Egypt. Whether in Tunisia, Iraq, or elsewhere, the mid-twentieth century witnessed an immense amount of activity that practically accepted Egyptian cultural production as the language of Arabic culture, but each of these fledgling nation-states sought to develop and elevate their own dialect within that. The dynamic between language and dialect is not only metaphor; any composer in the interwar period who wanted to produce 'serious' music had to do so in either classical Arabic or an Egyptian dialect, while other dialects were reserved for their own folklore. After the post-WWII wave of postcolonial independence, composers and lyricists beyond the confines of Cairo sought a legitimacy for their own dialects, including other Egyptian dialects, as ones that could convey a cultivated urbanity.

The recordings in this collection help tell that story as it unfolded in Lebanon. The early recordings by Ṣabāḥ and Wadī‘ al-Ṣāf ī in the collection typify the folkloric bent of the music recorded in Lebanon well into the 1940s. One of the more significant recordings in the collection is the song Waynik yā Laylā (Where are you Layla) by Sāmī al-Ṣaydāwī, who originally composed the song for Lebanese singer Kamāl al-Ṭawīl. Both Ṣaydāwī and Ṭawīl had built careers performing in the Egyptian dialect to audiences in both Egypt and Greater Syria; Waynik yā Laylā was one of the early non-folkloric songs performed and recorded in the Syro-Lebanese dialect, forming part of a trend that would continue and grow over the decades that followed. 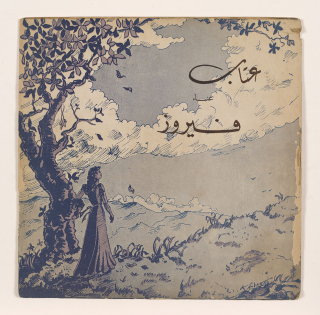 The artists who did the most to propel Lebanese song into the more exalted register regionally all had a part to play in yet another item in the box of wonders. The song ʻItāb (reproach), appearing on the Zodephone label in the early 1950s, was an instant hit, one that proved momentous for the emergence of Beirut as Cairo’s main musical rival. The vocalist, Nuhād Haddād, had been 'discovered' a few years earlier by Mohamad Flayfel, composer of such songs as Mawṭini (‘my homeland’, the popularly accepted national anthem of Palestine, and the post-2003-occupation anthem of Iraq) and Ḥumāt al-Diyār (‘defenders of the home,’ the national anthem of Syria). Flayfel encouraged Haddād to study music at the conservatory, and to immerse herself in that repository of vocal technique at the heart of ecstatic Arabic song: Qur’anic recitation (tajwīd). While at the conservatory, Ḥalīm al-Rūmī heard her sing and decided to take her under his wing, introducing her to his friends the Raḥbānī brothers, ‘Assī and Manṣūr. Rūmī also decided to pick out a stage name for her, one that means turquoise, and that millions of people now associate with their morning coffee: Fairūz.

As a romance blossomed between ‘Assī Raḥbānī and Nuhād (they married in 1955), so did their creative collaboration, the first fruit of which was the song ʻItāb that is on this recording. The airing of this song on Lebanese and then Syrian radio in late 1952 launched Fairūz’s regional fame, enabling her to sign her first recording contract with Zodephone. Indeed, Zodephone's early success as a record company was based on the company's recordings of Fairuz songs.

All that’s left to say is a big warm thank you to Emile Cohen and ‘Ezra Hakkāk for such wonderful beginnings!