Ernest Shackleton and the Farthest South

The ‘Nimrod’ expedition (1907-1909) was the first of three expeditions to the Antarctic led by Sir Ernest Shackleton. The mission was very much a private affair and at the time didn’t receive the support of the major scientific organisations. The ship itself didn’t meet Shackleton’s expectations, as we can tell from his appraisal when he first caught sight of it on the Thames on 15 June 1907:

I must confess that I was disappointed when I first examined the little ship, to which I was about to commit the hopes and aspirations of many years. She was dilapidated and smelt strongly of seal-oil, and an inspection in dock showed that she required caulking and that her masts would have to be renewed.1

Nimrod sailed from England on 7 August 1907. This was the first attempt made by the British to reach the Antarctic. However the Nimrod (named after a great biblical figure ‘the first on earth to be a mighty man’2, as written in Genesis) didn’t actually make it to the South Pole. The most southern point was reached on 9 January 1909 at latitude 88ᵒ23’S and longitude 162ᵒE.

The Nimrod, having the party of the British Antarctic Expedition, left New Zealand on 1 January 1908. We landed at Cape Royds in the Antarctic under the great volcano Mount Erebus at the beginning of February. On 3 March a party ascended that mountain, encountering severe blizzards, and for the first time in human history the great Erebus, 13,350 feet high, was ascended by men.

The Southern journey started from Cape Royds on 28 October 1908 and on January 9 of this year, 1909, the British flag was hoisted in latitude 88 23 South and longitude 162 East. We retraced our steps over crevasses through soft snow encountering blizzards till eventually on 1 March of 1909 we arrived at winter quarters, having covered 1,708 miles on the journey... 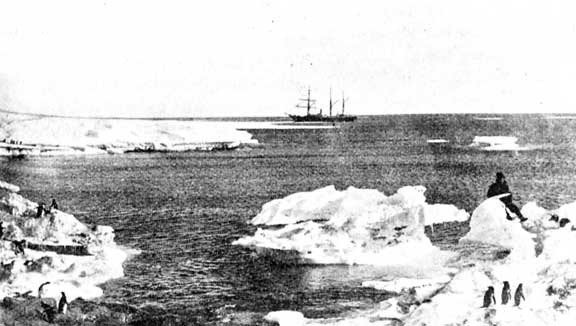 The dash to the South Pole is certainly the central episode of the whole expedition.3 Even though the main target of reaching the South Pole was not attained, the expedition represents the first ever registered record to reach the South Magnetic Pole.

The expedition was also a product of the Empire: the British flag was now flying over the Northern and Southern Poles for the first time. 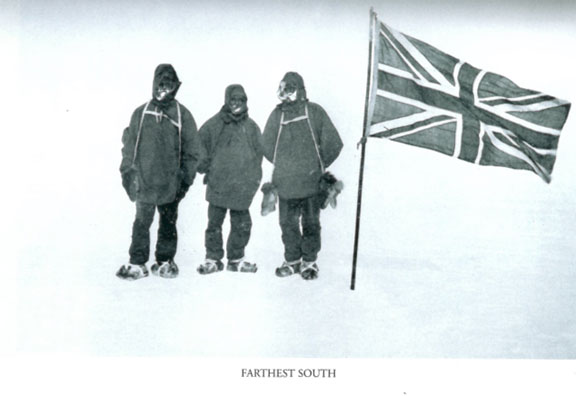 Photograph of Eric Marshall, Frank Wild and Ernest Shackleton at their Farthest South latitude, 88°23'S, Nimrod expedition 9 January 1909. From the book The Heart of the Antarctic by Sir Ernest Shackleton.

Men go out unto the void spaces of the world for various reasons. Some are actuated simply by a love of adventure, some have taken thirst for scientific knowledge, and others again are drawn away from the trodden paths by the ‘lure of little voices’, the mysterious fascination of the unknown. I think that in my own case it was a combination of these factors that determined me to try my fortune once again in the frozen south.4

This recording is part of the UCL Phonetics Collection (British Library ref.: 1CL0029071), original issue: Gramophone (HMV) D 377. The collection was acquired by the British Library Sound Archive from the UCL Department of Phonetics and Linguistics.

Posted by Camille Johnston at 11:52 AM