Recording of the week: in Hertford, Hereford and Hampshire …

H-dropping – the tendency for some speakers to omit the initial <h> sound in words like house – has a long history. It’s extremely common in England, Wales and parts of the Caribbean, but rare in Scotland, Ireland or indeed the USA and most other English-speaking parts of the world. Because of its association in the UK with ‘local’ speech, it’s extremely stigmatised and frequently provokes criticism as these speakers confirm.

For many years, self-conscious speakers in the UK have been anxious to avoid this social gaffe. In some cases insecurity over when to include <h> and when to leave it out can prompt a speaker to insert a <h> sound where there is none in the written word – a process referred to by linguists as hypercorrection. In the 19th century as social status became increasingly associated with accent, elocution classes, instruction manuals and pamphlets, such as 'Poor Letter H', were extremely popular among lower-middle-class speakers keen to acquire prestigious pronunciation forms. 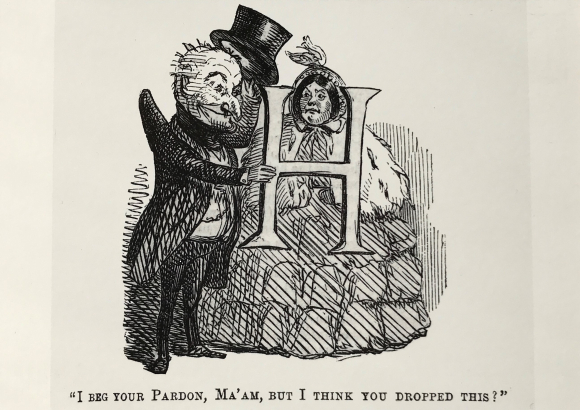 More than 150 years of middle-class anxiety about H-dropping has occasionally led to a change in the way we pronounce individual words. In contrast to the advice given here in 'Poor Letter H', we now seek to pronounce humble, humour, humility and hospital with initial <h> in formal speech, although they were originally pronounced without it even in ‘polite circles’. We also expect herb with an audible <h> in the UK, although the older form (without <h>) persists in the USA and opinions vary as to the ‘correct’ pronunciation of hotel and historic (is it a historic moment or an historic moment?). Perhaps the increased tendency to pronounce the letter aitch as ‘haitch’ as discussed here is an example of a similar change in progress. If prompted by our continued disapproval of H-dropping, it’s particularly interesting as it requires speakers to insert a <h> sound that is not reflected in the spelling.

Personally, I can think of no greater guilty linguistic pleasure than a judiciously dropped H or indeed a hypercorrect one. One of my fondest memories of my dad (b. Castleford, 1934) is of the occasion he took me to a prestigious boarding school for a hockey match and asked a rather condescending-looking schoolmaster the way to the hall-weather ockey pitch. That was 1983 – I wish he were around now to ask for directions to the hastroturf.

Find out more about social variation in British English on our British Accents and Dialects website and follow @VoicesofEnglish for tweets about language.