Recording of the week: representing Britain at the Venice Biennale

Every two years since 1895 the Venice Biennale has been bringing together artists from across the globe to take part in an almighty exhibition. This year is the 58th exhibition, and 89 countries are taking part. For our Recording of the Week we’re returning to 1956, when Lynn Chadwick (1914-2003) won the International Prize for Sculpture.

Chadwick was described as the ‘breakthrough artist’ when he first exhibited at the Venice Biennale in 1952, and in 1956, Alan Bowness described him as ‘a figure of international artistic importance’.[1] 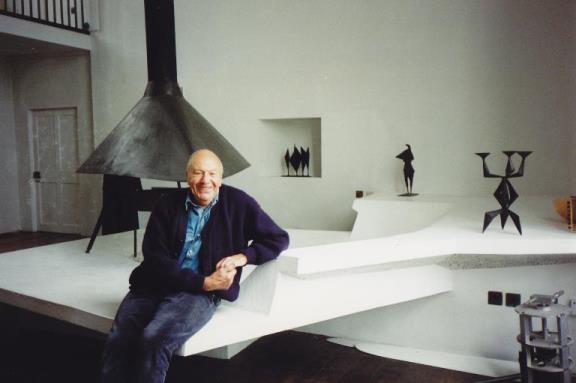 Despite being awarded such a prestigious prize, when asked about the Biennale Chadwick’s response is humble. Clearly delighted for his work to be exhibited internationally, he remembers how it felt to be the centre of attention.

The second half of this audio extract comes from a different part of Chadwick’s interview – and reveals a different side to the life of an artist. Chadwick recalls a conversation shared with German surrealist Max Ernst, and reflects on how artists fall in and out of fashion.

Lynn Chadwick CBE RA was interviewed for the National Life Stories project Artists’ Lives in 1995. Despite his wish to go to art school, which was refused by his parents, Chadwick began his working life in an architect’s office through a placement organised by his school headmaster. He trained to be an architectural draughtsman before realising that he would not succeed as an architect, and after the war moved to a small cottage in Gloucestershire where he began experimenting with mobiles (partly inspired by the work of fellow artist Alexander Calder). Gradually Chadwick’s work became more fixed as he developed his own techniques for working with metal, and is he known today for his distinctive sculptures in bronze and steel.

These clips and image are taken from Michael Bird’s essay, ‘Opening up to international influences: British art in the 20th century’ on the website Voices of art.

[1] UK Artists at the Venice Biennale in the 1950s. British Council.