A privilege to be alive on Fair Isle

It may come as little surprise, but wildlife sound recordists are usually absent from their recordings. It makes perfect sense, of course; the primary aim of these recordings is to capture the vocalisations of a particular animal or the collective sounds of a habitat. Through the use of microphone grips, long leads and stillness, recordists can completely remove themselves from the sonic picture they're creating.

Occasionally a recording will begin or end with an announcement. Here the recordist may state the location, time of day, weather conditions or species heard. Sometimes we hear the animated protestations of a recordist under attack (trust me, this happens). Other times it might be the gentle snores of a dozing recordist. But, for the most part, recordings are dedicated to nature and nature alone.

The following recording is a little different. And it's one of my favourites. It was made by Patrick Sellar, co-founder of the British Library's wildlife sounds collection, in 1974 on the Scottish Island of Fair Isle. The main subject of the recording is the Great Skua (Stercorarius skua), or Bonxie to use its colloquial name, however throughout the recording Patrick gives us a running commentary of the events taking place. He speaks of a birdwatching group approaching the nest site and describes the aerial attacks that this approach elicits (the alarm calls of one of the birds can clearly be heard). He then turns his attention to the landscape itself, describing in detail the clear view, light wind and calm sea. Though the calls of the Great Skua, along with the sweet aerial song of a nearby Skylark, can be heard throughout the recording, it's Patrick's description of what can't be heard that really helps us, as listeners, recreate the scene in our minds. As the birds call out we can almost feel the gentle breeze on our face and see the tiny, white-crested waves below.

Though I love the entire recording, it's Patrick's closing sentence that has really stayed with me. After describing the scene so evocatively, he signs off with the words ' It's one of those days that's a real privilege to be alive on Fair Isle'. For me, these words perfectly encapsulate the power of nature. To make us stop and remember just how lucky we are to be alive is really quite something. 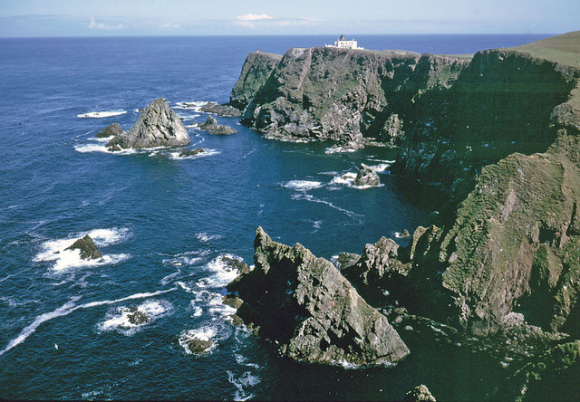 This recording is just one of many which has been digitised as part of Unlocking our Sound Heritage, an ambitious 5 year project which aims to preserve and provide access to 500,000 rare and at risk recordings from across the nation.